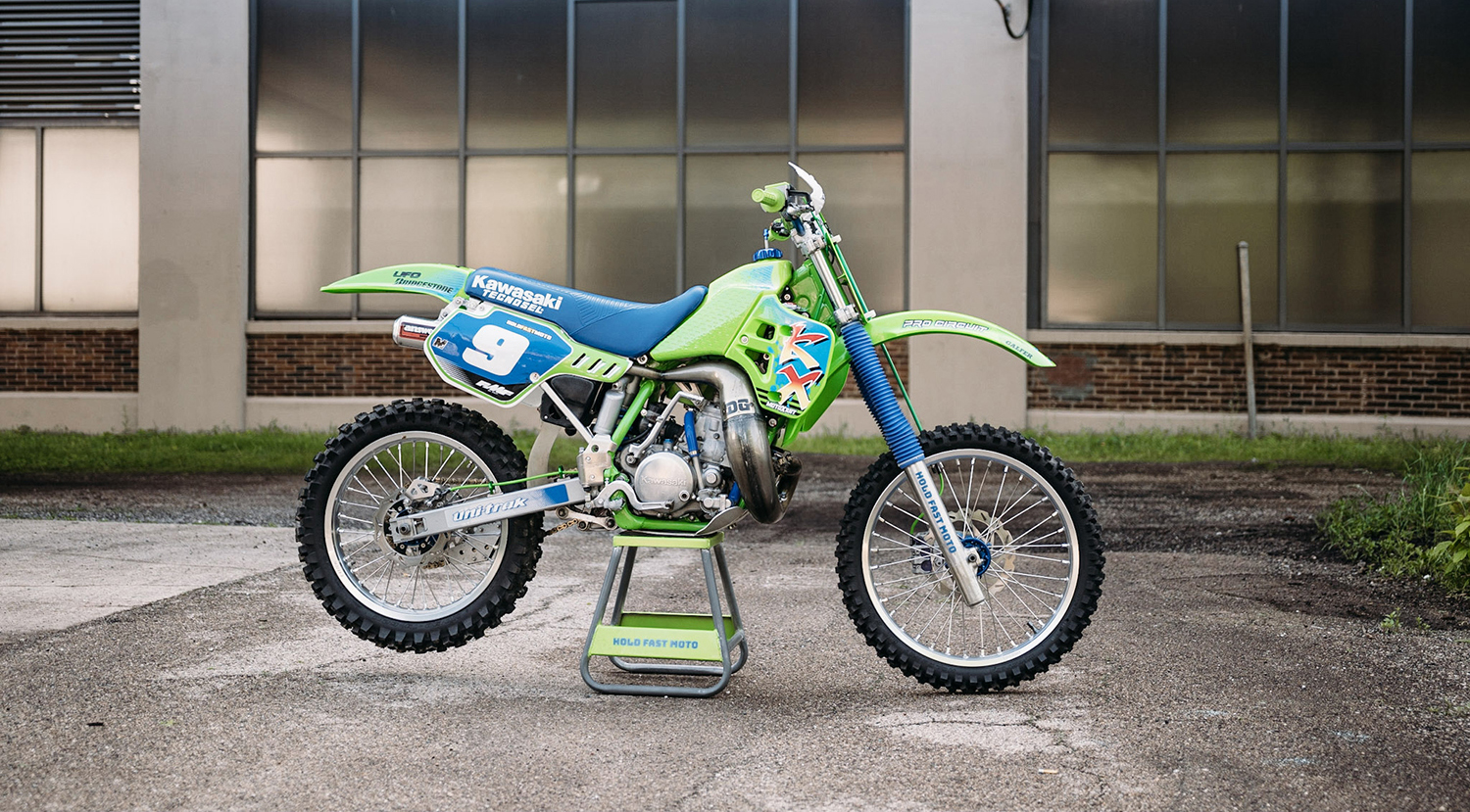 Ah the ’80s, say what you will about the decade but it was truly summed up by the mullet; business in the front, party in the back! While Wall Street made millionaires by day, come playtime it was hairspray, headbands, and hot pink, and that was just for the men. On the motocross track, it was as good as it gets, thundering 2-strokes provided the soundtrack as the heroes of the day took to the dirt in fluro colours with the only thing more spectacular than the jumps being the long flowing locks of the riders. For Jeff Galia of Hold Fast Moto, it’s a period best remembered through green-tinted glasses and his stunning 1989 Kawasaki KX250 has all the razzamatazz to do the decade proud.

With the enormous success of Team Green in Supercross and Motocross over the years, it’s easy to forget that the ’80s wasn’t a great time for Kawasaki. Although being the first to focus on the dirt of the big four back in the ’60s, twenty years later their rivals had left them behind. The Honda CR in red and the bright yellow Suzuki RM were winning on the track and selling big in the showroom. But Kawasaki kept chipping away, improving the KX every year and by the time 1989 rolled around, most major magazines picked it as the bike to have. It was highly useable, perfect for the weekend warrior and it looked the business.

At Chicago’s Hold Fast Moto, Jeff knows more than a thing or two about smokers, “I’m an engineer for the railroad in Chicago so when I’m not running these awesome turbocharged V16 diesel two strokes you can find me riding my bikes or in the garage working on something. I’ve been a fan of old school two-strokes for a long time so when I found a 1989 KX250 for sale nearby for $500 I couldn’t resist.” The bike was rough though and missing the rare as hen’s teeth factory tank from the year, so Jeff made the wise decision to buy a second bike for parts that luckily had the tank still attached.

To start the build he focussed on the motor and to do the job right it was pulled from the frame and stripped back to the last bolt. The bottom end is rebuilt and with it cracked apart all-new clutch components go in too. A full factory gasket set keeps it held together and the top end is treated to a new piston for good measure. “I was super stoked to find a NOS DG Pipe still in the box online that went on like a glove and not only looked rad but also improved performance.” While the fully rebuilt Answer silencer and blue hose kit give the engine just the right sight and sound.

With the screaming 249cc engine on the bench, attention was turned to the frame, and after a good clean up it was powder-coated Kawasaki Green. The subframe, however, was a total lost cause but Jeff managed to find a custom aluminium replacement that is both lighter and stronger. It’s been left raw, with the factory swingarm sent out for powder to bring it back to its best and as Jeff explains, “The footpegs also got powder-coated textured silver since the old school pegs are small and any extra traction helps.”

To turn it into a roller the best of the factory hubs were selected and then powder-coated in blue. Then the wheels were rebuilt using competitively priced Tusk rims and stainless spokes. Tire selection is always vital on such a bike, you have to know the terrain you’re going to tackle and Jeff has found the Shinko Holeshots get the job done across the board. With disc brakes front and rear that had been improved on the ’89 model, it made sense to update the discs themselves with wave pattern rotors with Works Connection rear brake and engine guards to match.

The year model had been an important decision in the purchase of the bike, allowing Jeff to race in both Evo and NextGen classes. “Not only do I like the track but I also love trail riding with my son so I decided to put a Ricochet skid plate and some Acerbis handguards on the bike that turned out cool.” The later of which sits upon the sweet blue Renthal bars that start the crazy colour scheme. UFO came through with the all-new plastic set but it was Jeff’s elbow grease that got the ’89 tank looking just as good. While the sweet custom graphics kit was pieced together by Motoxart who hit the colour scheme out of the park.

Speaking of which, few seats we feature hit the nostalgia button like the Tecnosel Gripper unit that is reupholstered with new foam. The green grips, the blue gaiters, it just makes your heart smile for that decade of total fun! “I was lucky to find a lot of period parts that would’ve been purchased by a rider back in ’89,” Jeff tells us. “I built it to honor the heyday of two-strokes, rad bikes, mullets, and awesome athletes like Jeff Ward and Ricky Johnson with his Zebra print Fox Racing pants!” He smiles. And with the help of folks like Midwest Vintage MX and good buddy Grant Schwingle behind the camera, it’s a welcome trip down memory lane at a time when looking back to better times seems to make a whole lot of sense.