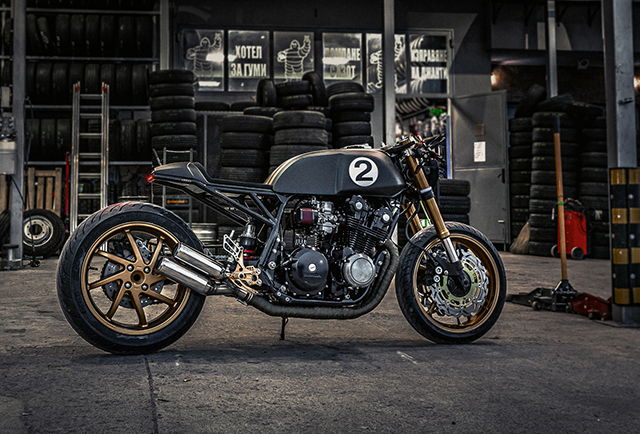 They say you have to go big or go home; and as last year was drawing to a close we featured a high quality custom build from a new shop in Bulgaria. With the scene just getting started in the country, it was hard to know when we might hear from the workshop again. Well, we didn’t have to wait long, as Bull Moto Custom has had huge success since their opening salvo was fired with the company already tripling in size. Back with another Honda, the crew headed up by Ivan Mushev isn’t playing around, giving an old favourite a full makeover. With just their second full build they’ve added their unique Eastern European design to a Honda CB750 and come out with a trick sports tourer they call GT2. 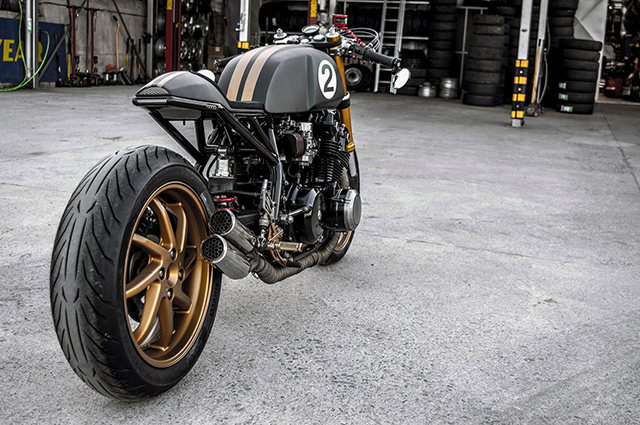 Based in the large town of Kyustendil in the far west of the country, the home of Bull Moto is a mix of modern manufacturing and ancient sites dating back to Roman times. There are still buildings in pristine condition from the 11th century, so you don’t have to look far for inspiration and with warm summers with little rain it’s a perfect place to ride. So despite a love for the craziest of creations that come from Japan, Ivan is insistent on building bikes that are first and foremost nice to be on and with Svetoslav Kostadinov and Vasil Pinev joining the team they’re ramping up for the coming riding season. 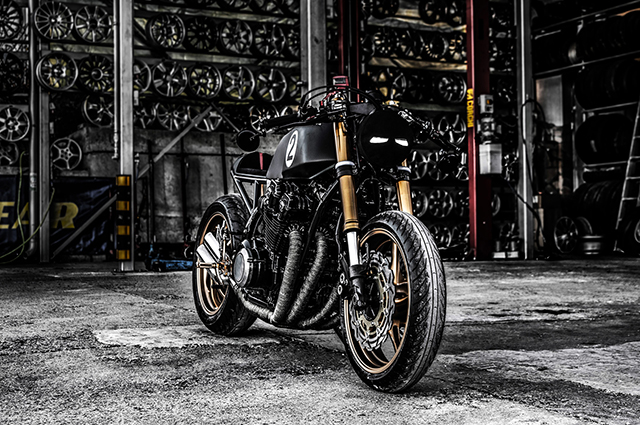 The CB is the first of the bikes ready to hit the tarmac but it was initially sourced from their local bike dealer as a 1981 stocker with plenty of work needed to bring it up to scratch. Inspiration for the build came from the Black Ford GT40 MkII and not only did that influence the aesthetic but the boys desire to create a GT style motorcycle. That means you need a quality foundation and to achieve just that they stripped the chassis back and got to work. The back end was entirely cut off, the swingarm ditched and the pivot point re-inforced to accept a stronger mounting arrangement. 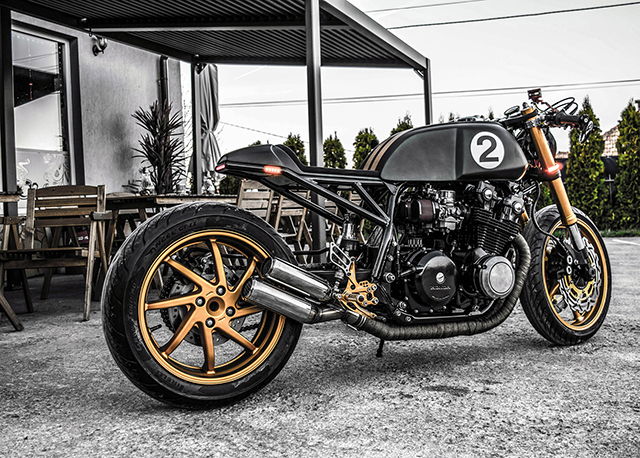 Then an entirely new rear subframe was fabricated from scratched and welded on, with a beefy design not lacking in physical strength and a strong presence. The all too common hoop tail was given a miss in favour of a more squared-off design that best matches the bikes ’80s lines. With the very clever integration of an LED taillight in the back and matching turn signals on the angled sides all having to be slotted in before final welding took place. Then before the gloss black was applied to give a uniform finish to the chassis, it was all smoothed out and plenty of brackets tossed aside. 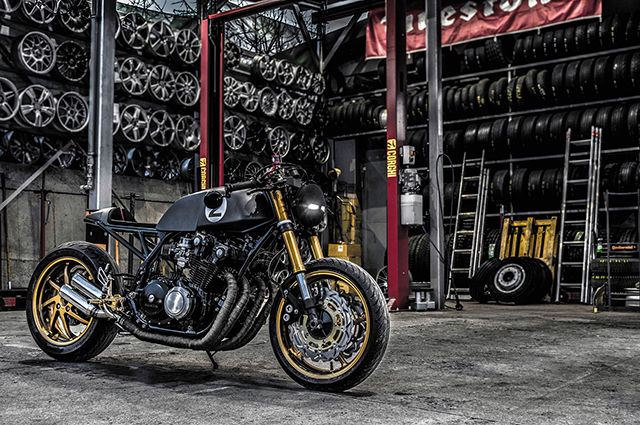 To update the handling Ivan wanted to go much further than just improved shocks and instead sourced a 1994 Honda VFR750 single-sided swingarm. With the standard upper shock mounts left off the new subframe, a new mount was fabricated and welded to the centre post, while the braced frame utilises custom machined bushings to accept the legendary swingarm and all it’s more modern components. But wanting a long and low look for the bike the factory shock was removed and replaced with a Honda Hornet item that still works brilliantly with the pro-link setup. 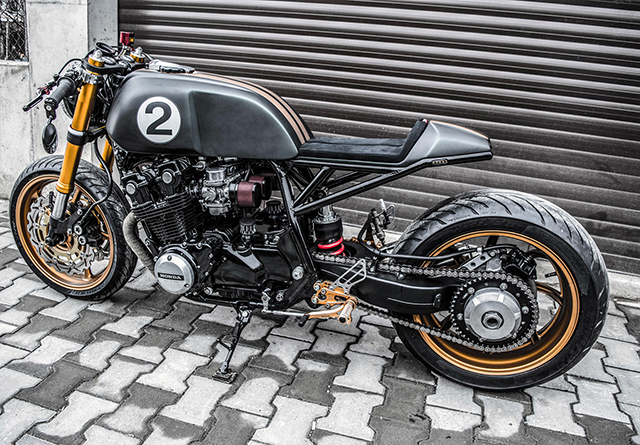 Such a drastic change would be let down in form and function if the spindly stock front forks were left in place. So the search was on for the appropriate front end and rather than use the typical sportsbike items the boys chose instead to take from a bike more closely related in handling characteristics. So with a bearing and stem change they slotted in the entire front end off a Yamaha FZ1 from 2009, fully adjustable and complete with its front wheel, big twin disc brakes and then wrapped both ends in the appropriately named Pirelli Angel GTII rubber. 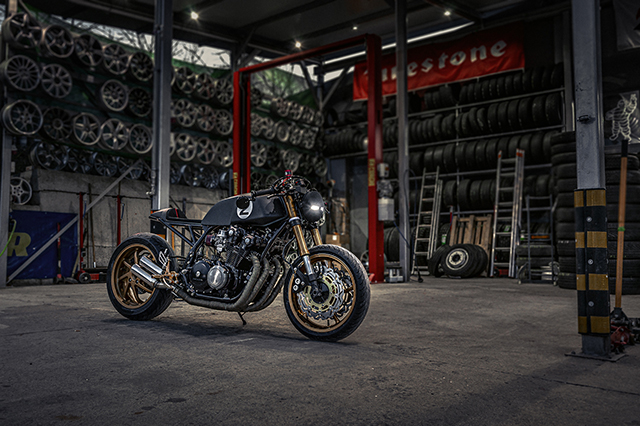 Moving onto the look and again the desire to do what everyone else is doing was ignored to go in their own direction. The rear cowl is a beautifully fabricated piece with its own aggressive lines that wouldn’t be compromised to store the electronics. Instead, it is the reshaped tank with heavily defined knee dents that is modified internally to hide away the cables and the battery. There are also two seat options for the rider, “The seat with red edging is Alcantara and was made by MGDesign, the other leather one is more comfortable by CrazyCust,” Ivan explains. The matte black paint has some green pearl mixed in while the no. 2 lettering is a direct GT40 replica. 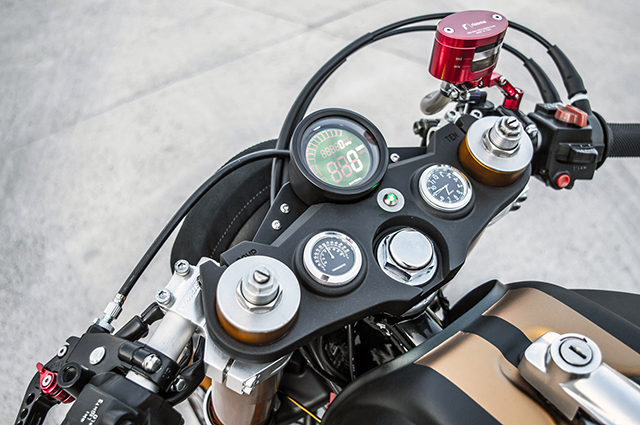 The old faithful 750cc engine has been rebuilt, repainted and given a set of filters for the carbs and a stunning 4-1 exhaust with twin chrome mufflers for a cracking sound. The client likes quality and the accessories are dripping with it, Sato racing rearsets, clip-ons from Vortex, Rizoma red and a trick LED headlight from Wrangler. Even the top clamp is a work of art, now acting as the dash with a Daytona speedo, lights and mini gauges all built in. The owner is understandably thrilled and on the first outing the biggest motorcycle equipment dealer in the country presented the Bull Moto boys with a matching Biltwell helmet, a nod to the crew who are causing a new boom in Bulgaria. 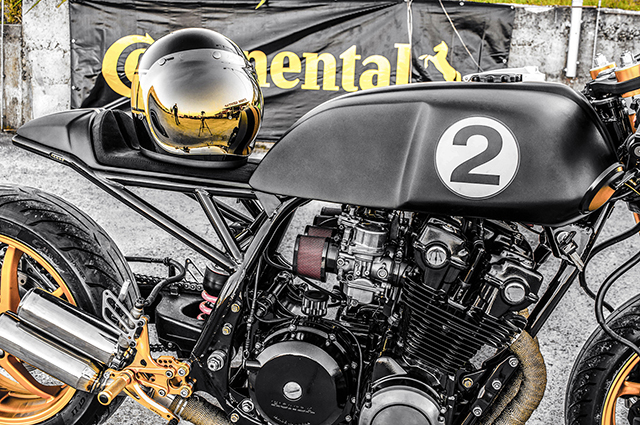 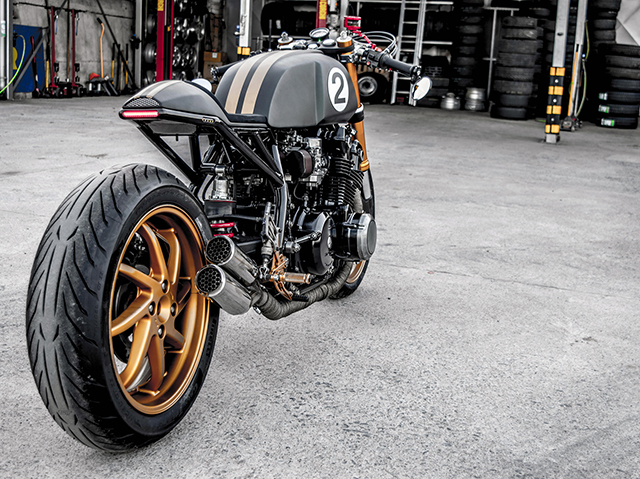 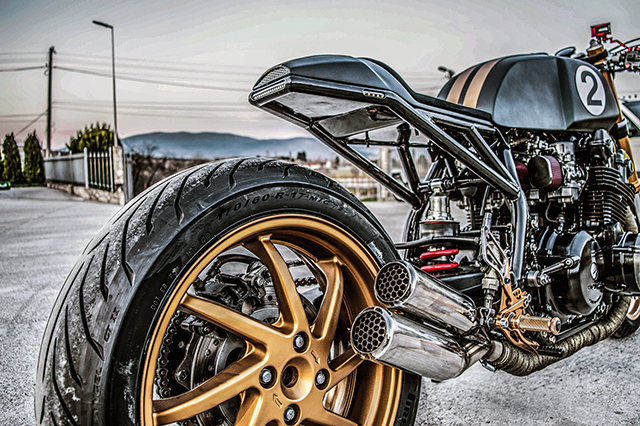 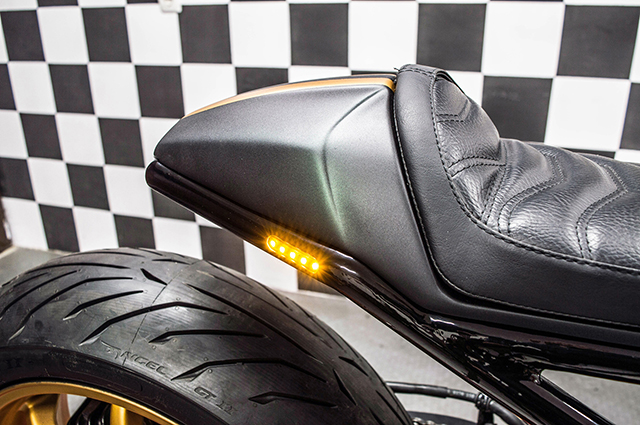 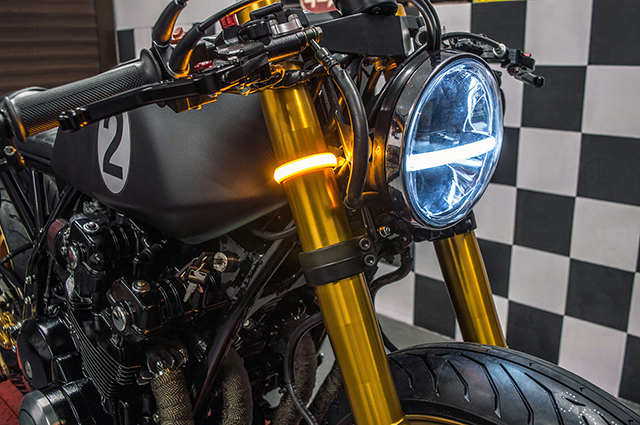 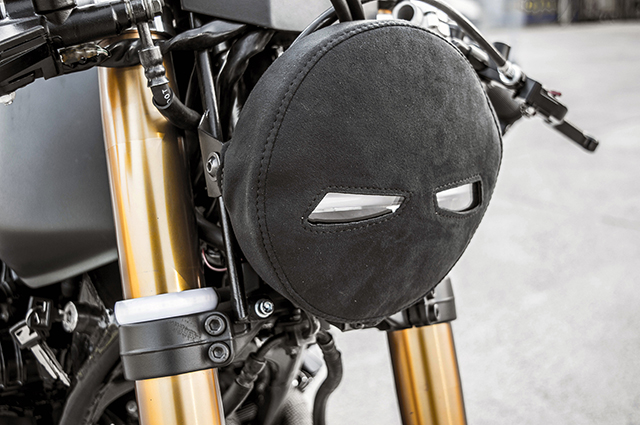 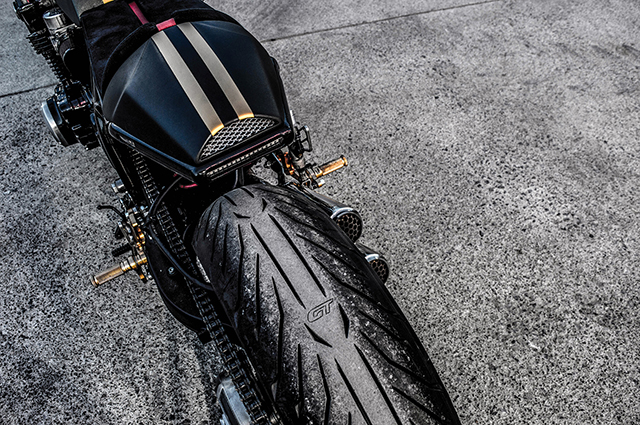 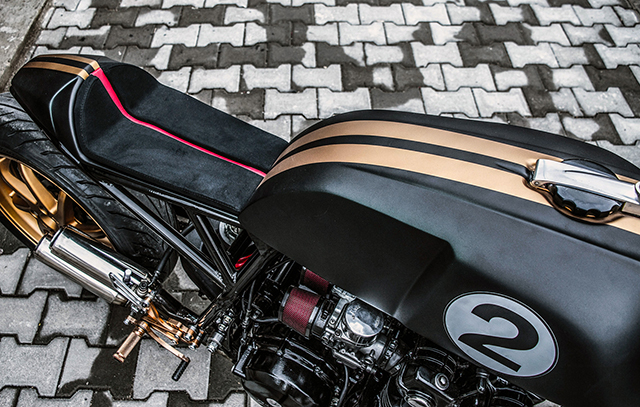 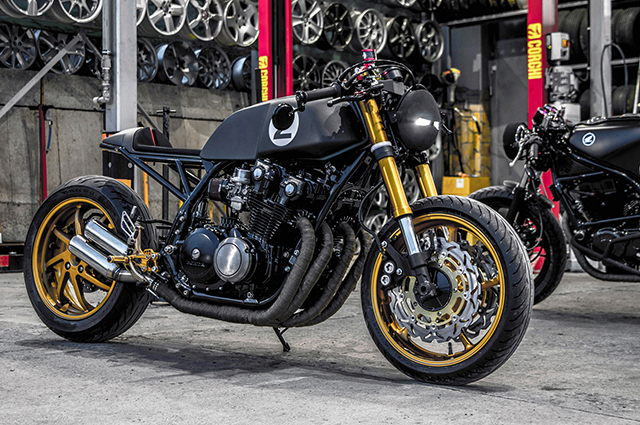