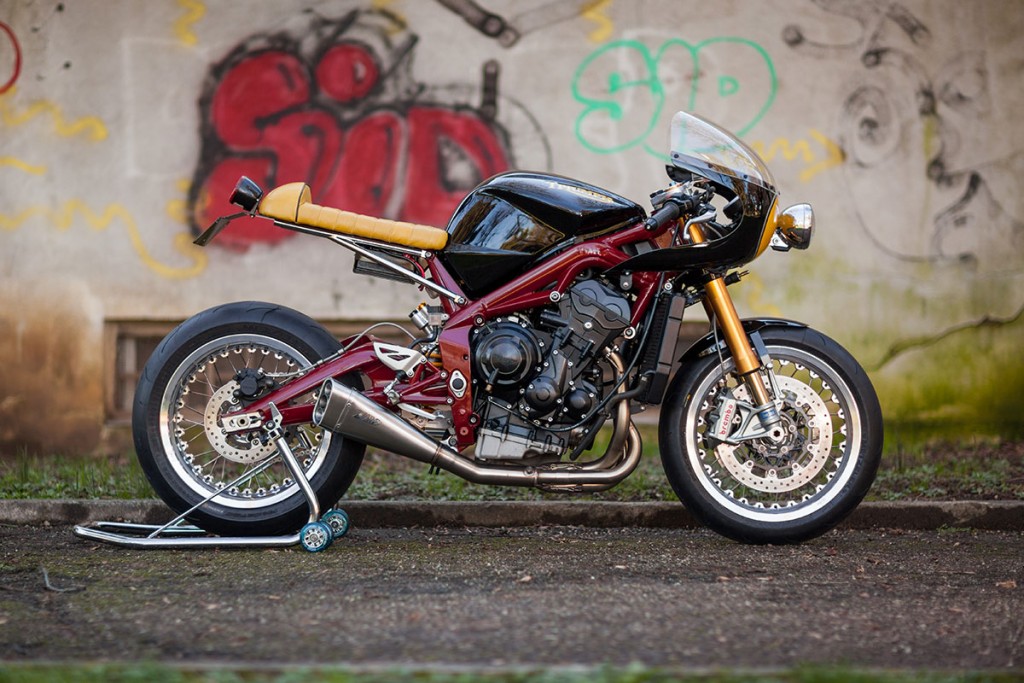 Every year, thousands of tourists descend upon the unassuming Italian town of Verona to take selfies underneath a certain balcony that inspired Shakespeare’s scene of Romeo professing his love to Juliet. But in the motorcycle world, during one long weekend in January, hundreds of thousands show a different kind of love – one for two wheeled machines – at the largest custom motorcycle show in the world: the Motor Bike Expo. With hundreds of stands across multiple football field-sized halls, there is always one exhibitor that stands out from the crowd – Mr Martini.

The man behind Mr Martini, Nicola Martini, is a local legend that has been building custom bikes for 25 years. Every year, he has a stand at the expo, and every year, he tries to go one better. This year was particularly special, with motorcycles, Mr Martini merchandise (ranging from moto boots to goggles) and, of course, the mandatory Italian Aperol Spritz bar all housed inside a 360 degree wall of scaffolding. Nicola’s flamboyant personality and his trademark red top hat commands attention like a lion tamer at a circus, and that’s all part of the charm.

Nicola first launched his business in 1994 when he sold his personal Harley-Davidson to raise enough capital to start the business. “We lived in the era when little money and many good ideas were enough to give life to a project,” he recalls. “Today all this is no longer possible. In order to undertake long-term projects, we need huge financial resources and, above all, the ability to see beyond the horizon.”

Thanks to the support of Carlo Almo – the man who brought Triumphs back to Italy – he opened his first Triumph dealership. “The shop which I had literally stolen from my father could accommodate up to three bikes. Slowly I expanded the business using some of the rooms. During my first year I sold six bikes and during the second year, I doubled the turnover. That is how my adventure with Triumph officially began.”

His love affair with Triumphs grew, as did his Triumph dealership. He always had a passion for custom bikes and, with his eye for design, it wasn’t long before he was building Triumphs like nothing they had seen in those parts of Italy. “I started making café racers using the old Trident models as a base. Much of my time I dedicated to hunting for components and mechanical parts in the markets that would allow me to customise the bikes to the point that they would become unique pieces. I think I was one of the first to create specific customisation kits, in this case for Triumph. I had the merit of identifying a style and giving it continuity over time.”

After running a Triumph dealership for many years and building a stack of beautiful custom bikes, Nicola decided to focus on something different. He bought an old 50s gas station in Verona and began to transform it into the Special Café, a place that would have custom motorcycles, art and a restaurant and would be as unique as he is. “I wanted a place dedicated to my lifestyle, a point of reference where you can admire unique motorcycles, indulge in a drink and get closer to some of these jewels, even for those who have never climbed on a motorbike.” Having spent a few nights there earlier this year, I can tell you it truly is a special place and can definitely understand why he rarely leaves the joint. Most days you can find him working on bikes, smoking hundreds of Texas style ribs, or just enjoying drinks with the thirsty locals.

There’s no other industry you’d want to work in more than the motorcycle industry, but it can also be very unforgiving – which has become especially evident during these tough times. To many, a motorcycle is only a luxury item and not a necessity (as much as we all might beg to differ). Running a custom motorcycle shop or dealership, selling moto gear or even running an online magazine like this, has left many in the dust. If there’s one thing I’ve learnt from Nicola Martini and his long and successful journey over the last quarter of a century, is that it’s better to carve out your own path, do it your unique way, than to just ride passenger to someone else’s journey.