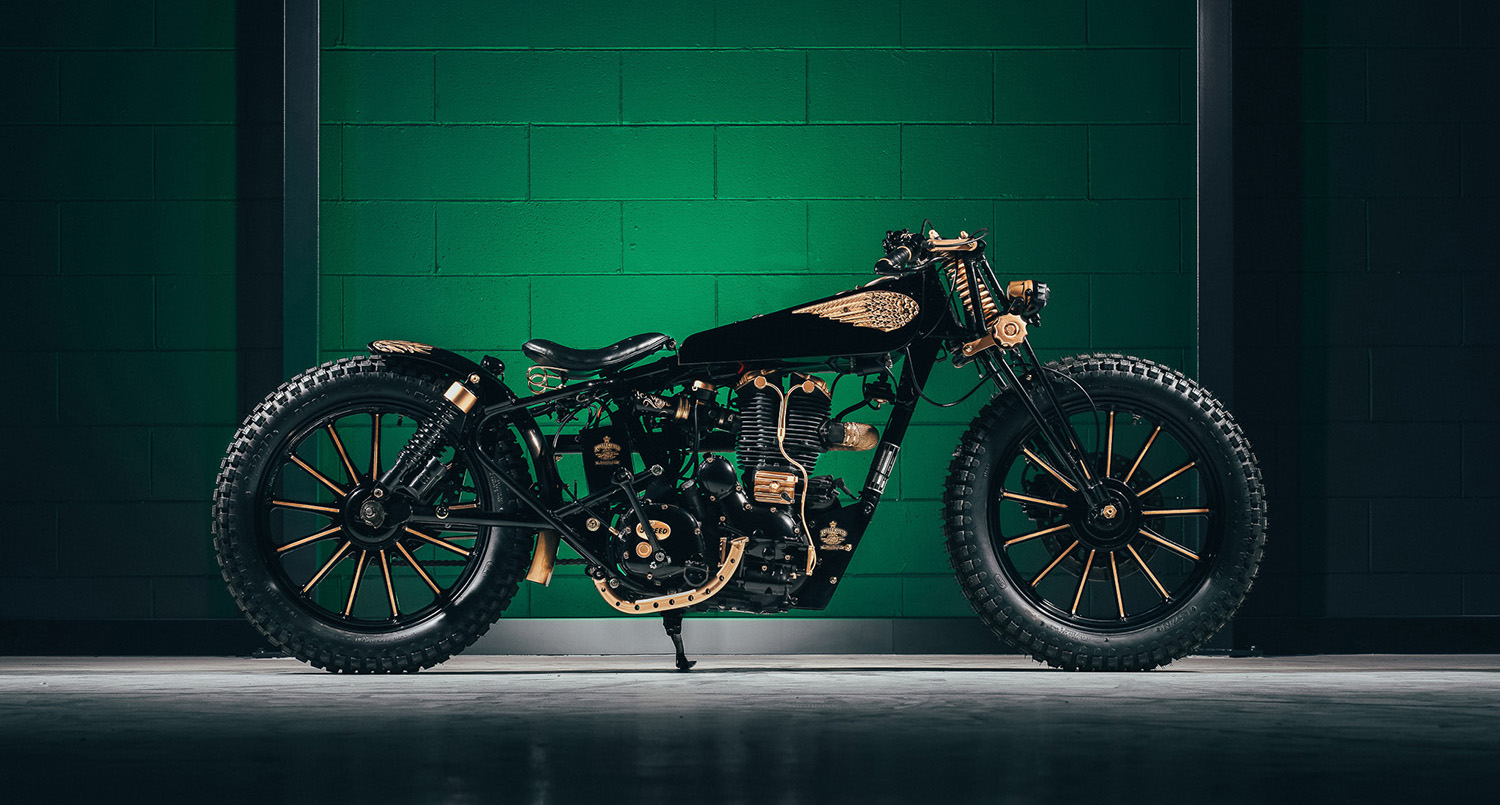 In 2020 the media with which an artist can choose to work with is almost endless; from ceramics to computer generation, paint to pixels, the options are as varied as the art itself. But where some prefer a canvas that can be hung on a wall, others wish to bring their creative expression to life in a truly useable form. Enter 54 year old Giacomo Galbiati of GDesign Custom Motorcycle in Como, Italy. Mechanical masterpieces are his forte and each machine summons a new idea, like this remarkable 2008 Royal Enfield 500 Bullet that’s as much Rajasthan as it is old Rome.

There is no arguing that when you mention motorcycles and India, the first thing that comes to mind is the classic Royal Enfield single. It might be British originally, but Indian’s have more than made it their own and few bikes have such a strong link with a Nation’s identity. This was an aspect Giacomo wanted to embrace, but as always, the man who has been building custom bikes for 40 years was always going to add plenty of his own flair.

The post-2007 model that he’d chosen for this project made a lot of sense, with all the classic styling of the original but with the new engine and the companies improved quality control to pass the ever stricter Euro regulations. With the bike rolled into his shop and on the bench, Giacomo zones in on the task,“ I never look at the clock when I have a plan in mind and go straight on my way” and like most artists he creates without allowing anyone to influence his direction, “my philosophy has been to build and sell, it is difficult for me to accept the client’s directives.”

The RE was stripped down to a bare frame and finally the new set of forks that had been ordered from India arrived. The springer setup provided the look he was after, a more vintage appeal, but the quality was horrific. “It seemed made and welded in a kitchen,” he smiles. But that’s the risk you take on eBay and rather than worry for long, they were stripped down, strengthened, and re-welded to give the form and function that was desired from the start.

With that problem solved, the ride height the forks would give the RE inspired a long and low approach to the rest of the build. With the frame in a custom jig designed for the job, it was stretched at the rear by 60mm. While the swingarm was also given extra strength and rigidity before it too was pushed out a further 60mm. To get the stance just right, a set of lower rear shocks were selected, but inverse mounted to better conceal the remote reservoirs that fade to black.

To get it all rolling a set of 13 spoke mag wheels, a popular conversion in India, were thrown on but not before they were wrapped up in Ensign Trials Universal rubber. But while the rolling stock says brat bobber, the bodywork needed to have a little more style. The large rear fender helps to fill out the extended swingarm, while its top end is sectioned to finish in two rounded curves. The fuel tank is even more unique, with the radius swapped for the ruler and the sheets of steel bent up on a bench.

The left side is strictly for fuel while the right houses all the bikes electricals apart from the reg/rec which sits hidden between the two. The key goes into the top of the tank along with a single button to start, while the gorgeous vintage gauges set the tone for the colour scheme of the bike with their brass bezels. Wherever you look there is more of the brass touch, either real or painted on and it comes to life thanks to the rich black background. Even the leather seat is stitched with the metallic hue and no area of the bike is left untouched by the colour scheme.

The engine too gets appropriately dressed up and the vintage styled single is the perfect platform, with its old school mechanical sensibilities. There isn’t much bobber about the factory exhaust so Giacomo bent up a single turn and let the gasses rumble out via a slashed cut tip. The velocity stack unleashes the classic Royal Enfield beat while the only modern touch, a projector headlight does its job without ever appearing out of place. “My philosophy is a little different, I focus more on the artistic factor,” the GDesign boss tells us. And what better way to appreciate that endeavour than on a canvas that’s just as much fun to ride!