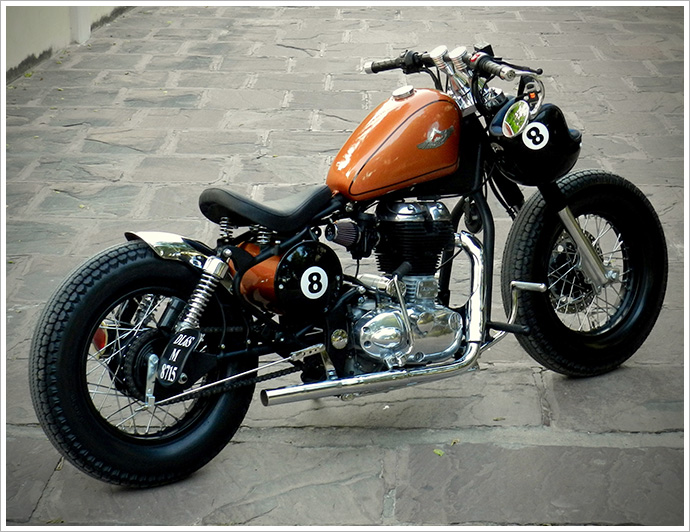 If it can be done with a Enfield, Rajputana will do it

You want another bike, and you want it bad. But you know the awkward, tense, likely-to-be-sleeping-on-the-couch discussion with your partner about the money that you should be spending on the mortgage/rent/credit card payments will be a killer. The more ordinary amongst us would probably leave it at that. God knows I would. But not one Mohit Sharma from a little place west of Asia you may have heard of called “India”. See, when he wanted a new bike for his stable, he didn’t ask the misses. Oh no. As a matter of fact he didn’t tell her at all; what he did was build this here bike you see before you and then give it to her as an anniversary present. Genius or what? We’re pretty sure the Nobel Prize doesn’t have a “Contributions to Bike Collecting” category, but if it did then this Sharma dude would be a dead cert. Vijay from Rajputana takes up the story. “The bike was built as an anniversary present from Mohit Sharma to his wife Anjali Sharma, it has a detachable pillion seat which you cant see in the pictures. This is the 8th bike from RCM and coincidentally Mohit is a great pool player… this gave birth to the whole “8 Ball” theme.” “Apart from that what I can say for sure is that we have just begun to scratch the surface of Royal Enfield’s potential as a donor bike for single cylinder custom bobbers. A few changes in the frame, metal fabrication of the tank, toolbox, extending the swing-arm etc really make a big difference to the overall look without having to spend extensively on a custom build.” Impressive stuff – both from Mohit AND Vijay. Never one to waste time, Vijay has promised us an exclusive on his next masterpiece which, if their recent track record is anything to go by, will be ready in the next two and a half minutes. Probably sooner. And if you want in on a little secret, we’re prepared to let slip a little tidbit of information about the next bike that will probably catch you unawares. You see, it’s not actually an Enfield…