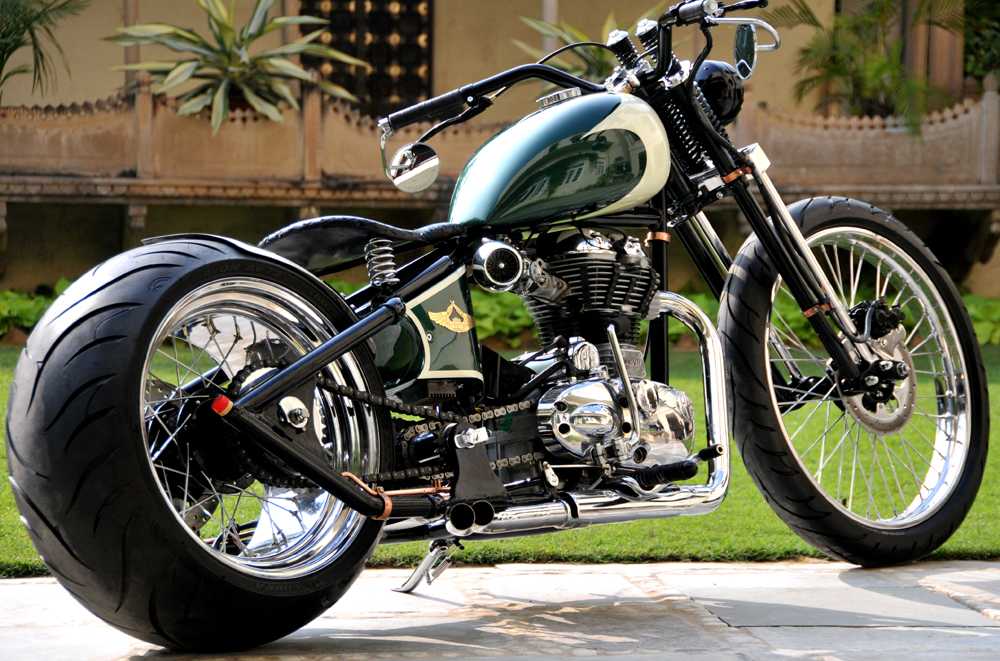 This bike, believe it or not, was a wedding gift. No, it wasn’t on the gift registry but the soon-to-be groom Subhayou Nayak decided to buy himself a little present before the big day. Smart guy. So he commissioned Vijay Singh and his team at Rajputana Customs in India to build him something special. The brief for the bike was pretty straight forward. “Subhayou specified that he wanted an old-school-looking fatty, with a 300mm rear tyre and a Royal Enfield 500cc engine” said Vijay. Apart from that, they could pretty much do what they wanted.

Vijay and co-workers spent two solid months building everything on this bike which they then named ‘Nandi’ (after the bull in Hindu mythology that Shiva rides and is protected by). “The thing with building custom bikes here in India and more so at Rajputana Customs is that every bike is literally built from scratch, the chassis, gas tanks, hubs, rims, sprockets, jack shafts, springers, girders… and the list goes on” says Vijay. “Apart from the engine and tyres we pretty much build everything in-house. It’s an ‘eventful’ learning experience.”

Rajputana Customs are receiving some worldwide attention for the motorcycles they are building. Sure, the fat tyre on Nandi might not be to everyones taste but there’s no denying this is a beautiful piece of workmanship and one very cool bike. We can’t wait to see what they build next.

[Thanks Raghu for the tip]