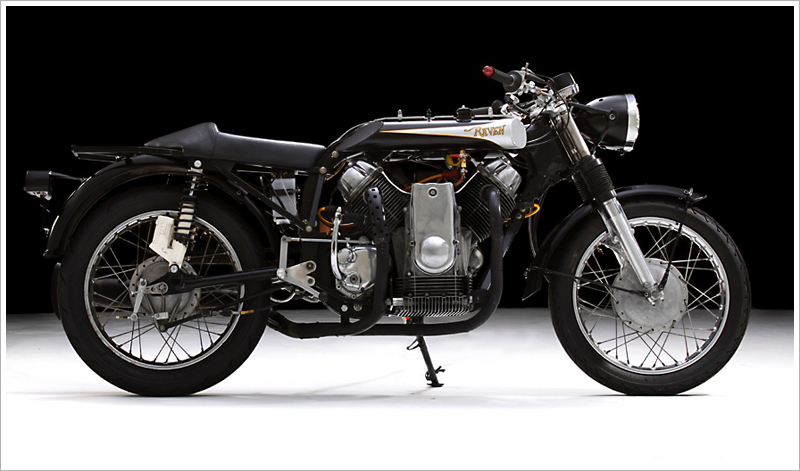 Moto artist Jeff Gundlach has designed many magazine covers for publications like Cycle Magazine and Cycle News over the years, but he recently finished designing and building his biggest project yet – the first Raven Motorcycle. To say it’s been a long time in the making is an understatement. “About 15 years ago I thought of the possibility of designing a bike using the Moto Guzzi engine and the Norton transmission” says Jeff. “Sketches were made and it went to the back burner”. Fast forward to 2 years ago and Jeff decided he had the skills and tools to proceed with the design he scribbled all those years ago.  “I wanted to build something unique, powerful, light, functional, and a classic look. Choppers, bobbers and sportbikes are very cool but, I did not want to build from an existing engine/trans/frame package.” This is how Jeff describes how the Raven came to life. “The design went through quite a few changes before I settled on this. I first did scale drawings with a 25 degree stem and a 58″ wheelbase. I wanted the motor mounted high for ground clearance and quick handling and as light as I could make it. I also didn’t want to ruin the casings of the parts I used so I could use parts off the shelf. The wheels, swingarm, brakes, forks and steering stem are from a 1968 Honda 350. I used these because of the quality and the look- plus they are easy to find. And the sprocket is on the left and takes a 530 chain.” “I began the project by building everything out of wood… much easier to change wood than steel. The engine is used as a stress member, being fastened by the top and bottom. The motor is a ’71 750cc Ambassador with a very light (3lb) flywheel. Now that I am almost finished all I have to do is the electrical system. I am using a Lucas alt. to make power and a digital regulator. When it’s complete I will take it to the N.C. Dept of motor vech to get my Vin numbers. I will then be able to tag it and ride. In North Carolina I can build up to 5 units per year without having manufacturing status. Believe me that will keep me mighty busy. I will ride it to Indy this year to MotoGp. It has been track tested back in Feb. I took it to Robling Road racetrack and I’m very satisfied with it’s performance. It’s a good bike.” This bike is the first of many Raven Motorcycles to roll off the production line – when we say production line, we mean Jeffs garage. He is planning to hand build these bikes to order, with a maximum of 5 being built in one year. The buyer has the option of a 750, 850 or 1000cc Italian V-twin powerplant. The pictured 750cc prototype is for sale on ebay at the moment for the price of $25,000 – not cheap, but considering most of the bike was handbuilt, it’s definitely better value than some ‘bolt on’ customs being sold out there. We can only hope to see it featured in one of the many motorcycle magazines Jeff has helped design – who knows, it might even get the cover.