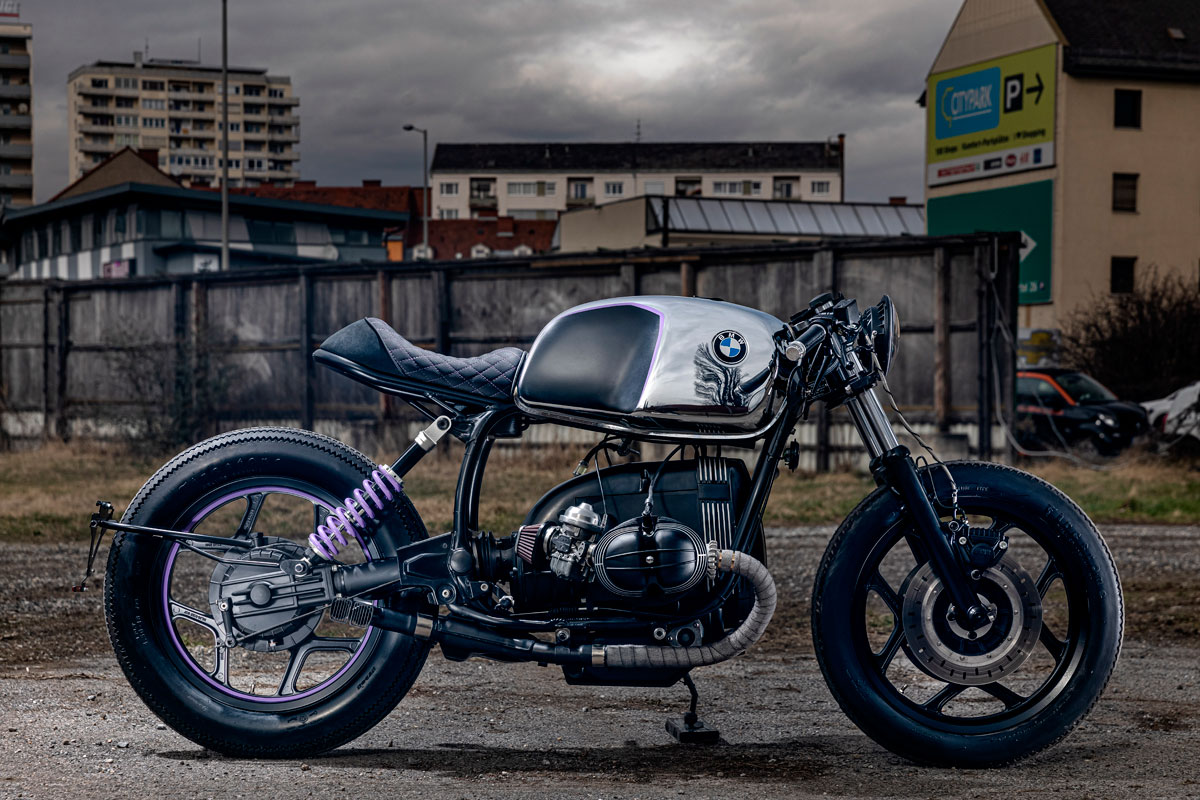 Suburbia, mile after mile of endless four bedroom brick homes that all look like they came from the same cookie cutter school of architecture. For millions of people this is home and a great place to be, but for those with a rebel heart and an artistic mind it is simply hell on earth. Factory motorcycle dealerships are the suburbia of our game and shops like Austria’s Titan Motorcycles are the funky art galleries downtown that also serve beer. Back with another one of their masterpieces, the boys have taken a BMW R80RT as their canvas and produced Picasso on two wheels that’s loved by the only one who really matters, the paying client that’s now smiling from ear to ear.

No fenders? Firestones? How can this be! Because some folks don’t want to ride the equivalent of a square brick home. Yes, it might function perfectly well, but there are plenty of people who would rather live or ride, something with character, charm, and style. And be willing to live with the odd cold draft through the floorboards or the occasional wet back for lack of a fender. At Titan Motorcycles, Michael and Thanh have reversed cylinder heads, fitted dualies to a power cruiser and crushed about every convention to produce many award-winning machines that kick commonplace to the curb.

Which is exactly what the client was looking for when he came to their door! The donor bike was picked up when the guys headed to Germany to deliver another build and not wanting to return home with an empty van, found the R80 in good condition and loaded it up. “The whole idea of this bike was – after all the Scramblers and Bobbers – and like the TITAN “JB” it was time for another rather more Classic Café Racer. The idea behind this Racer was to create a BMW Homage,” the guys tell us. But rather than do that in overt ways the tributes are dotted across the bike.

Starting with a 1990 model the weight loss program begins fairly easily with the enormous touring full fairing, with a massive screen and side covers running all the way to the engine, being the first to go. The seat unit for two-up riding was next to go and every last tab, bracket and bolt that wouldn’t be used was removed and the frame smoothed out. Then it was out with the grinder again to take off the rear subframe and an all new piece, short with a light upkick to the hoop, welded into place.

The bones of the bike could then be given a long-lasting coat of powder and this is the beginning of Titan’s absolute commitment to quality and reliability that is a feature of all their builds, no matter how crazy things get. The stock tank was retained, restored back to a perfect form and then for something different given a full chrome plate finish that is contrasted with the black knee dents and a purple pinstripe. With the theme mirrored perfectly moving backward with the black Alcantara seat given a diamond stitch in the same purple hue.

“Why Purple? Well, a special colour for a unique bike,” say the lads. Sure they could have gone with a full BMW blue and red theme, but it’s been done before and the client wanted something different. Where the colour really shines through is on the spring of the rear shock, the fully adjustable unit was disassembled so it could be painted in the tank matching colour and the rear wheel is also given a touch of purple too. With those wheels wrapped up in Firestone Deluxe Champion rubber, because that’s exactly what the client wanted!

Moving to the engine and now file finished and coated in black, the rebuilt donk looks the business and will run forever. But it also presented another chance for some BMW cap tipping too, “therefore you will find the end of the exhaust pipes as an homage to the BMW ‘double kidneys’ grille. With the BMW 303 being the first one to have them, we stuck to the design of the E30 Series which stood for pure driving pleasure.”

Like any Titan build the fit and finish is flawless and a full Motogadget kitted out wiring system keeps things looking a class above. The tricks keep coming with a combination of motoscope mini speedo and stock idiot lights recessed into a custom mount, that looks slick and keeps the tough Austrian inspectors happy. At the rear, a handbuilt number plate holder wraps around the rim with a tiny light for night time riding. While the modern LED headlight doesn’t look at all out of place on this otherwise classic build.

The customer is thrilled with the end result and what they get is a brilliantly built cafe racer, that looks exactly as their dreams desired and oozes BMW style and dependability.