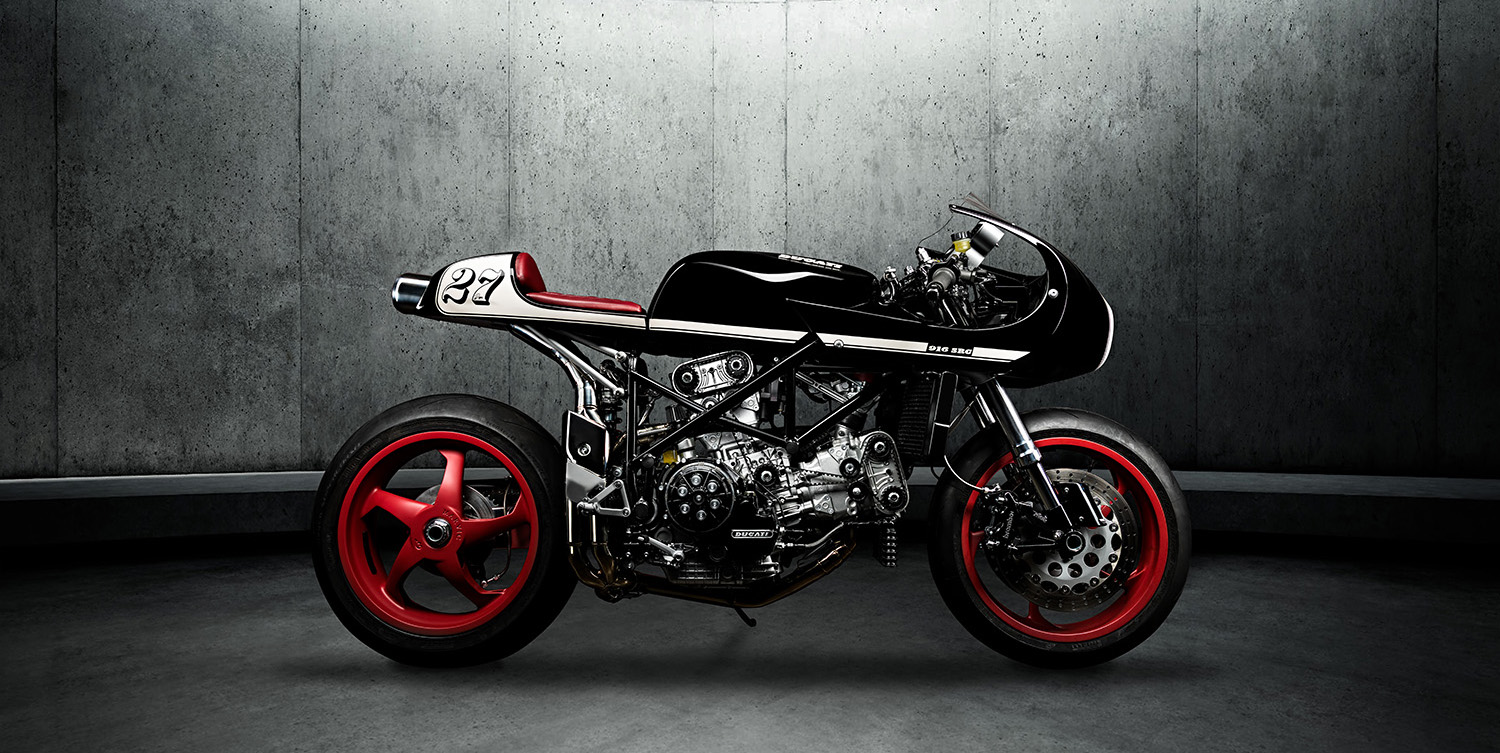 The ecosystem within which anything exists will mould even the most independent of outliers, you can fight it, but its influence is unstoppable. So when you call the Brazilian city of Sao Paulo home, with its vibrant cosmopolitan atmosphere, stunning architecture old and new, as well as a food scene to die for; your motorcycle choice is everything. And what better way to ride through a place of passion and beauty than on a Ducati. For Sebastian Rochon of SR Corse, the Italian brand is his lifeblood and he’s made his way building some of the best in South America. His latest creation is this stunning 1994 Ducati 916 SRC that’s ready to soak up the sun and hit the strip.

To understand Sebastian’s love and commitment to Ducati, you have to know a little about his journey. Born and raised in Uruguay, he left his home country for Brazil to pursue the opportunity to train to be a Ducati Technician. Learning his trade on the Italian marque could only be done in a big city and it also presented him with the opportunity to wrench on a host of road racing machines. In 2012 he went out on his own, establishing SR Corse and bringing with him many of his racing clients, there was a pause from the track for a while to focus on service and maintenance and then people started asking him to build customs.

The rest is history and from the latest superbikes right through to any bike ever made in Bologna, and a few other Italian brands to boot, he’s made one-off sensations to stun the streets of Sao Paulo. Starting with a 1994 Ducati 916 Monoposto many would go for a factory restoration, given they are the original “beautiful sportsbike” of the modern era. But this example was in terrible shape, missing many parts and the cost would have made it a less than sensible investment. So rather than build a cafe racer from what remained, Sebastian took a chance and built a retro racer, a rather unseen sight in Brazil, but boy is the result worth it.

With so many parts not fit for reuse the bike had to be returned to a rolling state and starting at the front the suspension has been given a modern upgrade. The entire front end from the razor-sharp handing 848 has been fitted up and the fully adjustable forks allow the bike to be dialed in. The big disc Brembos were also swapped over and paired up with the radial calipers offer superb stopping power. Not fitted from the factory, brackets were fabricated in house at SRC and a steering damper from a 999 made to work. While the entire rear shock assembly and linkages have all been rebuilt and pieced back together with new parts.

Now that it was standing on solid foundations the small team could get on with the rest of the build. The factory subframe has been junked having seen better days and is replaced by an all new section fabricated from alloy for weight saving. With the frame painted black, the new bodywork goes over the top, and all built from scratch its a work of art. The tail section is as cool as they come, a cafe styled unit that has the exhaust venting out the rear; with lights and indicators perfectly frenched in. The front fairing draws inspiration from the ’70s, but the flowing lines that dip in toward the tank are some of the most beautiful we’ve seen. While even the tank itself was cut and modified to match the rest of the metalwork.

The paintwork doesn’t let the fab work down and it starts with a gloss black base coat. Over the top is a red candy that comes through depending on the sunlight and the cream accents add a heavy touch of class. The logos are all hand painted, from the Ducati recreations to the number 27 that is both the owners favourite and that worn by the last rider to win the Bologna factory a MotoGP championship, Casey Stoner. A host of parts have been polished to a mirror finish, triple trees, forks, swingarm, etc and to tie it all together, both the gorgeously diamond stitched seat and the lightweight Marvic magnesium wheels have been finished in red.

To get the engine running at its best, like the rest of the bike, it has been given a nut and bolt full restoration. While the two major performance enhancers are the red-coated trumpet intakes and the stunning hand built stainless steel exhaust system that wraps its way to the rear of the bike and has been polished to a mirror finish. The all-new Ducati Performance clutch lets you see the inner workings, while both it and the brake system have been treated to all new braided lines and Brembo RC masters up on the bars. Then to fire it all into life the entire wiring system has been replaced with only the factory ECU remaining.

From the keyless Motogadget ignition to the handbuilt switchgear and new lithium battery that sits in the fab’d alloy front fairing stay, this electric system is a work of art. While the analog gauge package adds some vintage style and these pieces too were crafted at SRC, with the tacho needle matching the seats red finish. But just in case you need to know your speed a Motogadget mini has been recessed into the tank. These exquisite touches are dotted all throughout the bike; the front fender stays are now home to 3D printed brake ducts. And you begin to appreciate the absolute dedication and passion that Sebastian has for the Ducati brand. He left home to chase a dream and now with an endless talent to burn he’s building dream bikes for the Sao Paolo scene.