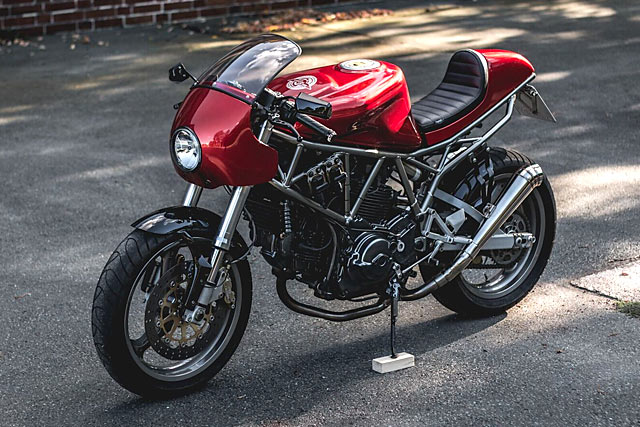 Ducati’s first and arguably best tilt at the modern cafe racer was their achingly beautiful Sport 1000. We still regret not grabbing a new one before they ceased production in 2008, and we bet we’re not the only ones. But there’s always the custom route to modern cafe Ducati ownership and Germany’s Kaspeed have done just that. Here’s their 2001 750SS SuperSport. To be premiered at the upcoming 2017 Glemseck Bike Show in a weeks’ time, the bike’s a product of three members of the same family. There’s Jimmy and his twin brother Mick and their dad Karsten. They’ve been building bikes in their ‘Kaspeed Custom Motorcycles’ Saxony workshop for a few years now. Their dad’s passion for motorcycles started in the 1970s and when Jimmy and Mick finally got their bike licenses, the long-dormant moto passion was rekindled. This is already the third bike they have built in their new workshop and it is definitely their most sophisticated project to date. “Even before we acquired the bike, we knew it would be a tough task to turn it into a cafe racer,” says Jimmy. “The main challenges were the wide, curvy gas tank and the angled frame lines, but we were up for the challenge”. Before being disassembled, the rear frame of the bike was extensively modified: the lines were tightened towards the rear end, shortened and simplified so only a single rear tube remains. “We wanted to create a seamless connection between front and rear bodywork from the front fairing all the way back to the seat cowl,” says Jim. So starting at the pointy end, they found an aftermarket front fairing that was shaped with a classic, racer-like look. It was then adapted to take a smaller headlight.

“In the middle of the bike, we cleaned up the factory gas tank to add some flow. Then for the rear end, a hand-built seat cowl was shaped from scratch with all the mould fabrication done in-house”. And that’s not all; the final lay-up with carbon-fibre, Kevlar and fibre glass was also done at the workshop. Then a bespoke single seat was made by a trusted local upholsterer. With all the major structural work completed, the process of stripping the bike down began. They refurbished all the worn parts and integrated the new electronic components. “The exhaust manifold was then polished and we fitted two GP-style exhausts with custom mounts to underline the modern racer intention”.

When it came to the Ducati’s paint, the goal was to keep the scheme simple so as to let the bike’s shapes speak. The paint is a Ferrari Rosso Fuoco (or fire red) which involves a sophisticated three-layer process. “We actually do all our paint work professionally in-house, since one of us is a trained automotive refinisher”. The engine and frame got a new layer of paint as well; the original colours were used on the frame and wheels while a contrasting dark grey metallic paint was chosen for the engine. The bike’s new headlight has a LED parking light ring to give the front end the modern touch they were aiming for. Two retro gauges from Daytona were installed and some Motogadget Motosign Mini warning lights were integrated into the upper triple tree via CNC machining. In addition, the bike got some LSL levers for the Brembo brakes and Motogadget bar-end indicators. It also comes with a stainless-steel license plate mount including yet more Motogadget indicators as well as a small rear light integrated in the rear tube. The wheels are now hugged by Pirelli Diablo Strada tires. And probably most amazing of all, the cafe Ducati is still fully road-legal in Germany. You know you’re speaking to decent engineers when the country’s infamous TÜV laws are bested without so much as a swear word or a furrowed brow. Take that, bureaucratic overlords.