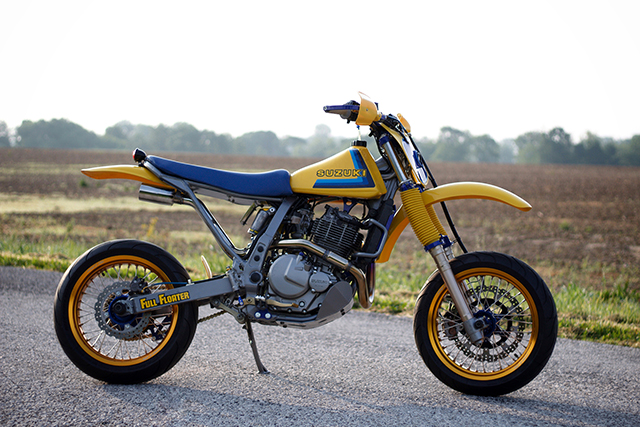 The 80s is known for many fashion trends, plenty worth forgetting but according to new research it was the decade of bright primary colours; think Pac-Man, the MTV Logo and BMX Bandits. Suzuki’s design division was all over it with the blue and yellow expanding across the range and the brightness turned up to 10. It’s a look that Spencer of Parr Motorcycles has always loved and he’s gone full nostalgia with a build he calls ‘Retro-Moto’. From a 2003 Suzuki DR650 he’s crafted a stripped down, modern Supermoto, that wears the classic RM uniform. 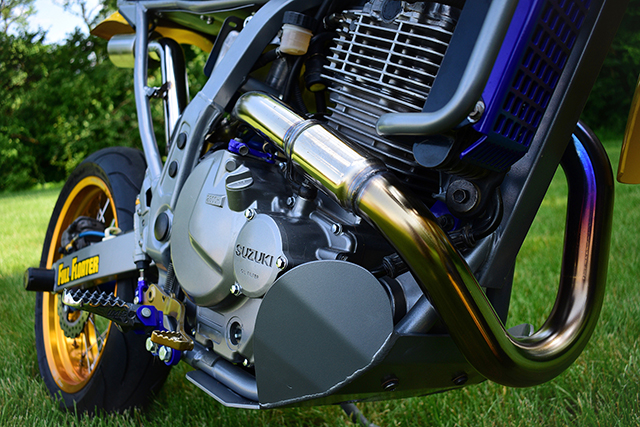 [superquote]“I was a police officer for 5 years  until I was diagnosed with ocular cancer which led me to be blind in one eye.”[/superquote]

Spencer has always had bikes, big and small, and customised every single one he’s owned, with the common theme being modern mechanicals matched to a retro vibe. “It has been a hobby up until recently. I was a police officer for 5 years until I was diagnosed with ocular cancer which led me to be blind in one eye.” With a wife and baby girl to support he made the decision that from now on life was going to be lived to its fullest. Working as an investigator by day and bike builder by night. 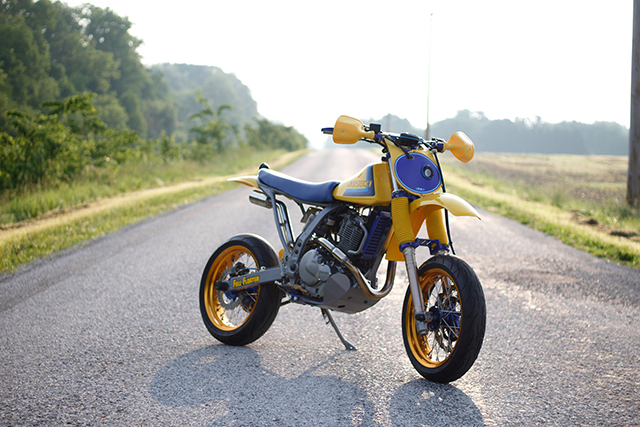 Wanting to be able to show off his skills on a bike you could just jump on and go for a blast, the big single made plenty of sense. “I decided to show the DR some love and do a full frame up Supermoto build. When I go about a design I always land back on retro styling because of the bold colors and lines. A DR based off a vintage Suzuki RM400 was the design concept,” he explains. With less than 5k on the clock, it was the perfect donor and was up on the lift for the strip down. 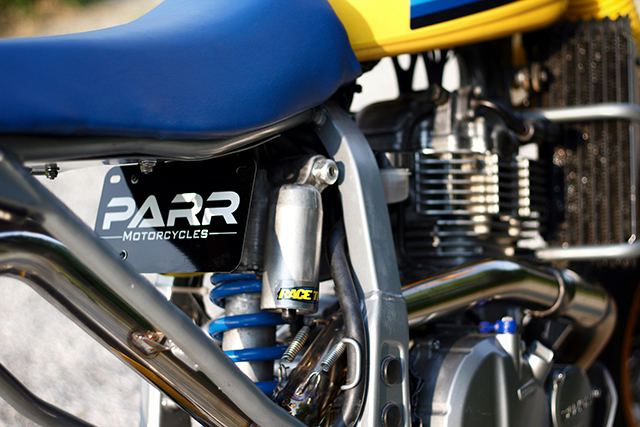 Wanting to save weight and with the minimal bodywork to go back on, parts like the airbox, standard exhaust, side panels and big factory seat were put in the recycling pile. Next the grinder was fired into life and all the standard tabs and rear brackets removed before the tail section of the subframe was cut off. In its place Spencer has neatly welded in an up-kicked hoop with mounts for a new rear fender. While underneath he’s fabricated an ultra neat and well-hidden electrics tray. 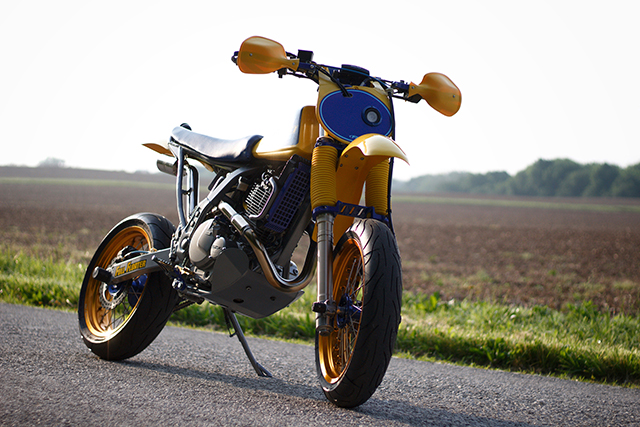 “After the frame was complete, I sent it out for powder coat along with other parts. The frame and swingarm were coated in a light grey, while the accent parts were blue and gold.” Over the top goes a yellow RM250/400 Clarke fuel tank that instantly places the bike in the right era. Before a set of Suzuki RM Fenders were bolted up, with the addition of a mini hugger, the perfect custom touch. The seat is a modified DR pan, that Spencer has covered and shaped in fresh foam before being wrapped up in the Suzuki blue vinyl. 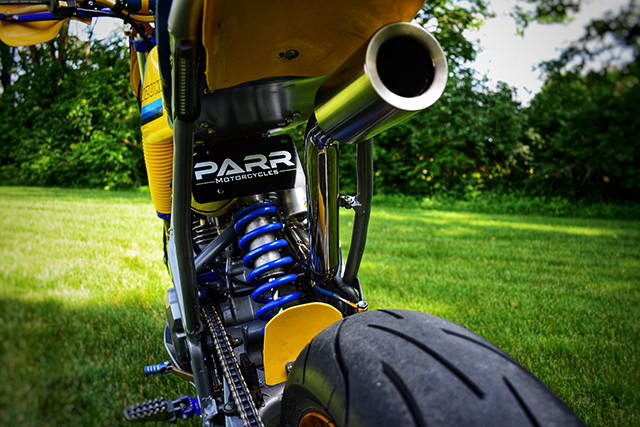 But the color combo isn’t just applied to the visual side of the build, even the performance modifications come with the primary color touch! It starts with the Warp 9 Racing wheels (17×3.50 Front/ 17×4.25 Rear) wrapped up in Michelin Pilot Power rubber. That play host to the Apex floating rotors that feature anodised blue centres. More blue is shot onto the rear spring that is part of the Racetech single shock. While the stock forks get Racetech internals, blue trees and yellow gaiters to match. 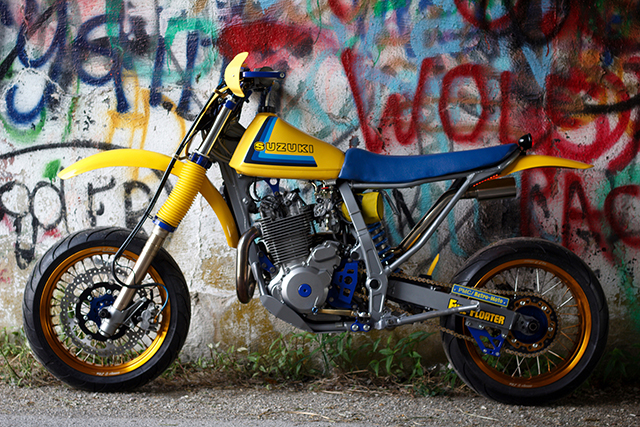 Internally the 650cc single cylinder thumper didn’t need to be touched but that didn’t mean it couldn’t lay down a few more horses! The header pipe is an FMF Powerbomb with the remainder of the exhaust handbuilt by Spencer himself from stainless steel. It’s his first ever exhaust fab and not only looks great but sounds a treat! To match the factory carb has been updated with a DynoJet stage 1 & 2 kit, wearing a yellow air filter sock. While the engine mounts and sprocket cover are finished out in blue. 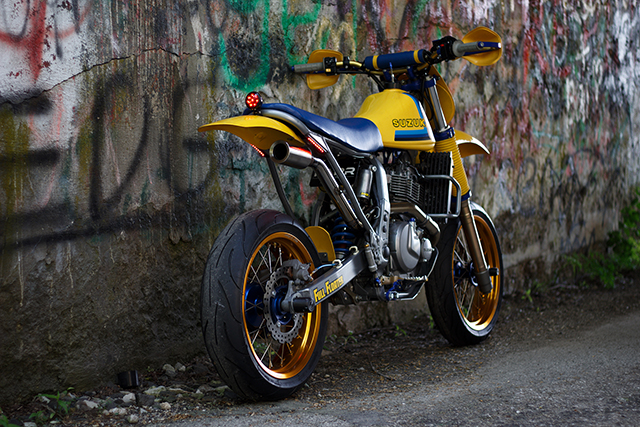 Up front modern technology is applied with a hole cut in the number board for an LED headlight and more light emitting diodes taking care of the rest of the essential duties. There are parts from Motogadget, a Trail Tech Vapor speedo and just the bare essentials added for a lightweight, wheels up weapon! With a deep desire to make bike building his full-time career, Spencer made sure to have ‘Retro-Moto’ complete in time for The Reunion Motorcycle Show. The late nights paid off with the Parr Motorcycles creation taking home a trophy and the dream of working to a different beat now much closer to reality. 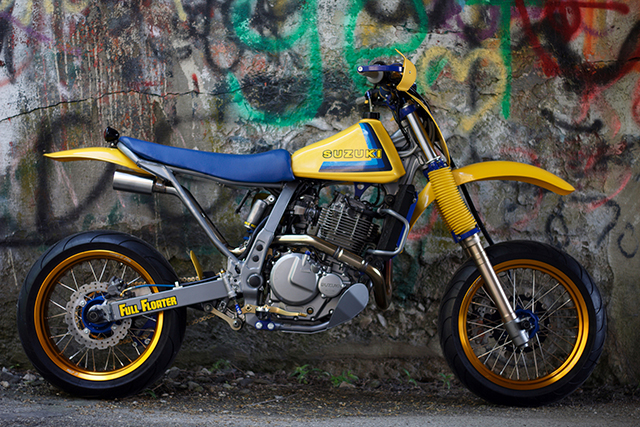 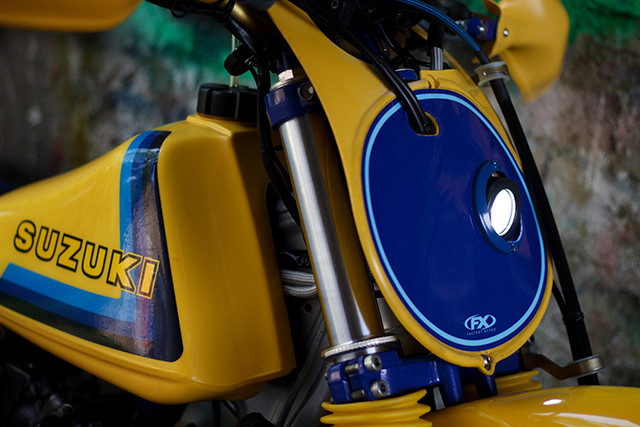 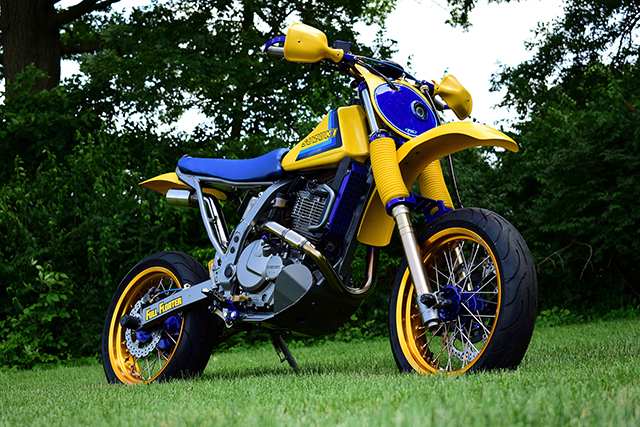