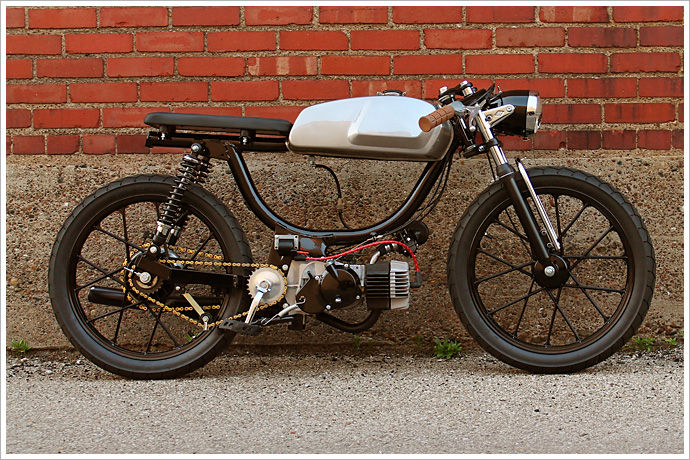 A wise man once said, “If a custom bike could be made with keyboards alone, there would be outstanding builds everywhere.” Now I’m pretty sure most people here would know what that means. Comments sections are the playground of armchair experts who talk the talk, but just can’t seem to ever put a spanner where their mouths are. And although we have our fair share of those types around theses here parts, I’m pretty damn proud to say that we also have guys like “Revdub”, a.k.a. Jeremy Dubish. He’s not only one of our top commenters, but he’s also a bastion of civility, positivity and constructive criticism. Now, while we are pretty thankful for him just showing up each day, we are uber stoked to be able to present a bike of his as well. Here’s his very sweet little “General Mayhem” Puch moped. Here’s the Rev. “It was shortly after moving to a new place, while driving around one afternoon that I saw a group of people on what looked like miniature motorbikes. I didn’t know what they were riding, but they seemed to be having a heck of a lot of fun. I went home and started searching the internet. It turned out they were members of a (not so) rough and tough moped club.

“Moped” wasn’t even a term I knew the meaning of, but I wanted in. A few weeks later, and many hours spent looking at classifieds, I bought a bike and started showing up to their meet-ups. Riding was as fun as it looked, even if the speeds were mostly slow. Fast forward several years later and here I am: putting together some bikes for myself and still obsessively into mopeds, motorcycles, and just about anything with two wheels.” “I had just sold a bike and regretted it, something I’m sure many can understand. So, what else could I do but start another? I don’t consider myself a custom builder, yet. I just know what I like and I try to make it. For this bike, I wanted it to be clean and stripped to the bare minimum. I’d be lying if I said that I haven’t been influenced by a lot of what I see on the pages of Pipeburn. I bought an old frame and began cutting. No one would guess it, but I have dozens of hours into the frame alone.” “The tank is N.O.S. from a General moped. The only problems with it were the large dents on the left side and the lack of a gas cap, which was surprisingly difficult to find. I decided early on that I wanted a clear coated bare metal look for it, so filling and painting were out of the question. After gathering parts over the winter, I rebuilt the engine, had everything powder coated (including the gas tank), and began putting it all together. The seat is a piece of oak with shaped closed-cell foam and a cover made by my friend Nate. I know it’s thin, but it’s surprisingly comfortable. I have named this bike, “General Mayhem”, which I’m fully aware is an oxymoron. Because, seriously, how much mayhem can be caused on a moped?” “In the world of small bikes, there are many real builders that are creating things that might surprise some people. These builders are who I look up to, people like the guys at Indigan, Motomatic Mopeds, Motion Left Mopeds, HNRZ in Chicago, the Weekends in Florida, and many more. We won’t break any speed records, or ride on the highway, but damn if it isn’t a lot of fun riding at low speeds with good friends!”