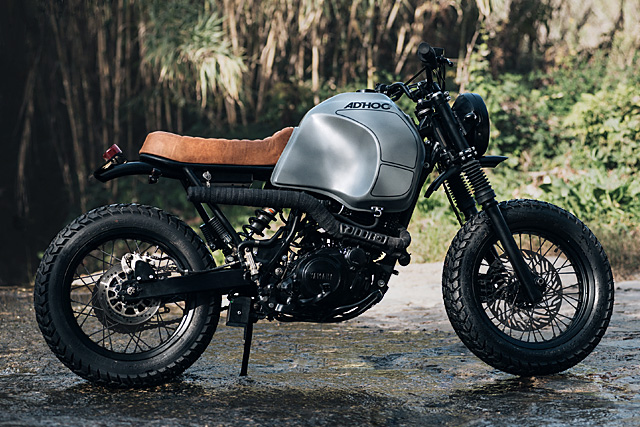 There are certain artists, designers and builders whose work is instantly recognisable in their field and often even into the broader community: A Hendrix riff, a Pollock painting or a Scorsese film. In the world of custom bikes few builders’ creations are more instantly recognisable than those of David González from Spain’s Ad Hoc Café Racers. Twelve miles outside of Barcelona along the C58 Highway, with mechanics apron on, David operates out of his small workshop that is equal parts artist’s studio and motorcycle garage. It is here that his unique creations are realised and while some may consider them quirky, David in fact is sticking to the true Latin meaning of the name Ad Hoc – or for this – a solution designed to solve a specific problem. In this case it’s a 1991 Yamaha XT600 known as “Rising”, a flat tracker that’s built to shred the wildly varying street surfaces of Greece. David found the Yamaha while flicking through the local classifieds and with such a low asking price and not being one to pass up a bargain he snapped it up. There was no immediate plan “I used it in its original condition for a whole winter, until I decided to start cutting.” The XT600 is arguably the best all-purpose motorcycle of its period, with the ability to do just about anything a motorbike owner might require. But a standard bike can only last so long in the hands of a custom builder and the perfectly good machine was up on the lift and stripped back to its bare frame to begin the transformation. “The main idea was to make a very low bike, flat-track style,” but first plenty of metal was going to have to be cut off both to reduce the 170kg wet weight and create proportions more suited to the styling David had in mind. The rear subframe was the first to go, with the chassis cut back to the centre posts and a new shorter piece fabricated and welded on that has much cleaner lines than the factory mess that was covered in plastic. The next step in the build was the fitment of a Bultaco Frontera tank, but as the pictures show this didn’t last. When the bike was completed and David readying himself to deliver the bike to his client a rather large problem was struck “I was about to leave for Greece, when we discovered a hole in the fuel tank fiberglass. We decided not to use any fuel tank of this material anymore … and we decided to use a gas tank of a Yamaha Tenere 600” With the Bultaco tank off the bike the big enduro Ténéré tank is actually much more befitting of Ad Hoc’s unique style and finished in a light grey with the firm’s graphics creates a beauty to the purposeful tank. The last-minute change of tank also meant a change of seat in both colour and design, David doesn’t accept delivering his clients anything but the very best and this would be no exception. The new design meets the tank perfectly and hugs the contours of the frame all the way around for a factory finish. With the bike designed to be ridden and ridden hard, generous amounts of padding was added and this assists in keeping the proportions in line with the large new tank, before the whole lot was wrapped in a new piece of tan leather. The small fuel leak had resulted in an all new tank and seat but for David all things happen for a reason, “this little “incident” delayed sending, but it gave us the opportunity to talk more time with our client Mike, the number 208 painted on the tank is something very special for him”. To add a little Scrambler appeal the ugly square factory headlight was tossed aside for a fellow Yamaha unit that comes from an XJ650. The big round light has its rear shell painted black before David fabricated a set of mounts that position it hard back against the triple trees. Keeping things tight and minimalist was a theme in many of the new additions to the bike, giving a stubby and low look. The fenders are no different with the front item mounted like a factory enduro bike up under the lower triple tree but this a heavily bobbed metal item in black to keep things understated. The rear gets the same treatment with a more road going look, a clean-cut fender that mounts under the upswept tail hoop. To add extra rigidity back into the frame having cut the rear section off the subframe supports have been bolstered with solid steel plate and all the metal work and fenders given a coat of matte black. With the bike coming along one of the most important aspects for David is that Ad Hoc bikes perform to their purpose and this meant giving the bike the right stance and hardware to get the job done. The setup starts with a motard 17inch rim that replaces the big 21inch hoop up front and gives the bike a nice flat stance. Now wearing equal sizes front and back the wheels and spokes have been given a coat of black before being wrapped in the theme matching Pirelli MT60’s. The standard suspension setup on the XT was one of the reasons they were so popular and David has retained the front 41mm telescopic forks but rebuilt them internally to give the height drop he was looking for. Equally the rear monocross setup with the Bilstein shock is brilliant on all surfaces and provides go-anywhere road holding. With the ability on all surfaces this Ad Hoc custom has it also benefits from one of the most versatile single cylinder engines ever built. The 595cc air-cooled unit with a 4 valve head provides plenty of low down torque at any revs, crisp throttle response and more than enough top end power for some serious fun in a bike now weighing less than 150kg. Having looked around David couldn’t find an exhaust he liked or matched the styling he was going for, solution; build one! The 2 into 1 system keeps things simple with a tight tuck close to the body, heat wrap prevents pipe burn with it running right under the rider’s leg and an internal baffle keeps the noise to a limit without taking away the Yamaha’s famous cackle. The electrics are kept simple and user-friendly without interfering in the visual appeal David creates. The battery has been mounted under the swingarm in a custom fab’d box, while the rest of the loom and the ignition key has been moved to a second box under the seat. Smoked lense turn signals are fitted up front and rear, with an old school tail light and plate holder out back. To get things finished a set of MotoX bars and new grips are complimented by a new switchblock and single gauge all in black, there is just no deviation from the Ad Hoc principal.

With everything buttoned up, David could finally deliver the machine to Mike, the new owner in Greece. And now there is yet another brilliant creation from the Ad Hoc stables that cannot be confused with anything other than the bike building mastery of one David González.