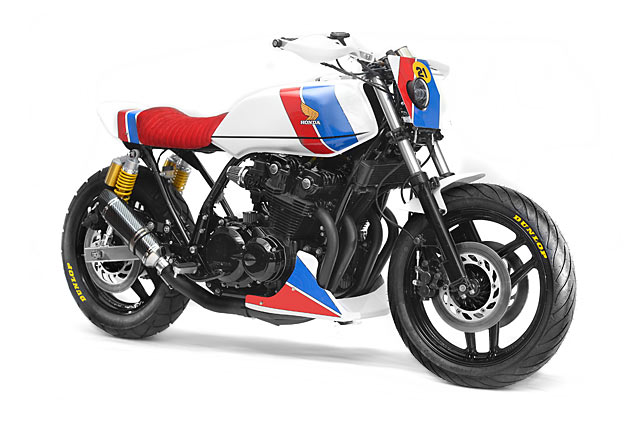 You know it’s going to be a good birthday when your moto-loving better half asks you to close your eyes and leads you out the front door towards the driveway. But there’s always that nagging doubt. What if, in your heart of hearts, you don’t like the surprise bike? There’s no accounting for taste, and that goes double for us know-it-all custom bike ‘experts’. But there’s one thing for sure, if anyone with a skerrick of taste found this red, white and blue bad boy in their driveway come their birthday morn, they’d be one seriously happy camper. And that’s just what happened, thanks to Michael Mundy and his Florida-based Steel Bent Customs. “The client contacted me a few years back to build a bike for his son as a birthday present”, says Mike, smiling. “So at the end of last year, the client’s wife again contacted me to build another bike for her husband’s birthday, so the two could ride together’. Mike says that it was amazing working with the same client twice, as it was someone who was familiar with the Steel Bent Customs’ style and really knew what they were looking for in a build. ‘The bike is named ‘Liberty’. I use many of the same model donor bikes and I ask the clients to pick a nickname in order to differentiate them from past builds. It also is useful when a client contacts us to build a bike and references a past Steel Bent build they’d like to somehow incorporate into their own”. Mike located the donor bike nearby. As the Florida locals will all too quickly tell you, early 80s SuperSports (the 750s and 900s) are damn hard to locate in decent condition; the CB1100F SuperSports are rarer than a Kardashian with good taste. “So when I located it, I worked out the deal and grabbed it straight away’. The seller was an older gentleman who was unfortunately in the early stages of Parkinson’s Disease, so his riding days were over. Mike says he was a genuinely cool guy and that they were able to help him out a bit more with the sale price. Nice work. “I knew that when I started the build, I would need to straighten out the backbone and level out the tank and seat”. As fans of the shop will quickly realise, it’s become part of the Steel Bent Customs’ signature design. “Working with the client’s ideas, we eliminated the headlight cowl and replaced it with a number plate and an LED headlight. We also added a lower fairing from AirTech, redesigned the rear cowl and had the seat wrapped in an amazing red suede to match the iconic Honda Racing Corporation paint scheme”. [superquote]“By all accounts, the bike now screams like a chimp on fire and goes like one, too”.[/superquote]

Mike then powder coated the frame and rims gloss black and used a DynoJet Stage 3 jet kit for the carbs to allow them to breathe better with the pods and the 4-into-1 exhaust. By all accounts, the bike now screams like a chimp on fire and goes like one, too. The hardest part of the build was eliminating the extra wiring to help the front number plate be as clean as possible. “That, and redesigning the seat and rear cowl. We cut the seat in half and used the side panels and some fiberglass to obtain the shorter, single-rider look’. And for all those trainspotters out there, they hid the new lithium-ion battery under the racer’s rear seat cowl. “My favourite parts of the Honda?”, Mike retorts. “I think the paint and the straight-line backbone of the bike, along with the lower fairing, really give it a great racer look. Also, the gold anodized bars and matching shocks really pull the yellow touches in the design together nicely”. And the number 21 on the bikes’ front board? Why, it represents the client’s birth date. The lucky bugger.