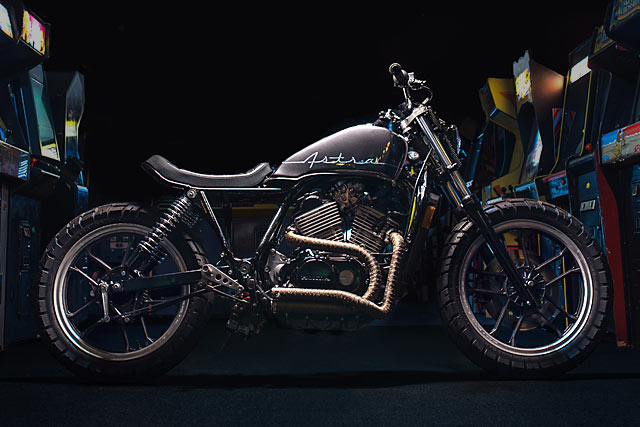 One-Up Moto Garage is a solo adventure into the world of custom bike building by Taylor Art Henschell. Gratefully assisted by partner Arden Kvern, Art started building bikes full-time once he graduated from college in 2014, but he has been tinkering ever since he was 17. “I’m 26 now. These last four years have really kicked my ass in the best way possible. I am walking the line of building as many as I can to meet demand, while still giving each one the time and dedication to make sure I always ‘one-up’ myself. Right now I produce about four bikes a year.”

Usually, when we ask builder about their creative influences, their answers are nuanced and subtle, involving hints of this and a touch of that. Not so for Taylor. “This build pays homage to an original arcade favorite of mine – Atari’s ‘Asteroids.’ You’ll find hints of it peppered throughout the bike’s details.” The seat upholstery, for example, subtly shows the interface of the game; with the ship spinning around shooting wildly in every direction. And the headlight is an upside down triangle, similar to the hero ship’s profile. “I chose a dark metallic silver on black to hint at the space gray background of the original Asteroids.” He’s leaving the other Easter Eggs to our imagination. Let us know if you spot any more. “The Honda Ascot twin has always been a dream bike for me to customize. Generally, I focus on bikes that no one else thinks to use. That made the Ascot a huge drawcard for me, as they’re not a common bike to modify.” Taylor specifically calls out the 500cc liquid cooled power plant, the 6-speed ‘box with the shaft drive and the matching 18″ cast aluminum wheels that this bike was adorned with from the factory.

This build was apparently very smooth from start to finish. The gas tank was already pretty much exactly the look Taylor wanted so in a rare change of process for him, he kept the tank stock and just tweaked its overall position. The front end was lowered a little and rebuilt, but otherwise it was kept fairly stock. “The rims were painted to match the tank, but everything else on the bike is a vapor blasted raw aluminum finish, or it’s been powder coated black,” says Taylor. He also had to fabricate a one-off aluminum upper triple to accommodate the handmade faceplate and dedicated iPhone speedometer. [superquote]“The exhaust does have slip-in baffles and no, it doesn’t heat your foot like some people have asked.”[/superquote]

“The seat was fun – I love upholstering patterns that are one-of-a-kind. Usually I don’t wrap exhausts but this one was asking for it and I am really pleased with the outcome. The exhaust does have slip-in baffles and no, it doesn’t heat your foot like some people have asked.” The wiring is clean, simple, and completely tucked away. Power is supplied by Shorai, as it’s Taylor’s preferred brand, and he opted for progressive suspension in the rear on this build. “My favorite artist Eric Snodgrass did some awesome chrome-like, hand painted art on the tank which has become a staple of my builds.”

Taylor reports the biggest challenge was the engine’s vapour blast. “Plugging and blasting the entire engine before tearing it down for powder and a top-end rebuild was a real pain.” First, he fabricated bespoke plates to block off all the intake and exhaust ports. Then he spent a day vapor blasting the whole engine with aluminum oxide to get the original paint off. “Next, I filled the blasting cabinet with glass bead media and honed the whole thing which took another day.” Once finished, Taylor dried it down and then tore it down for the prerequisite head gaskets and valve work. Always shooting to build bikes that are hard to define, Taylor clearly dislikes pigeonholes.  “Is this a soft tail bob? Street tracker? Cafe? I don’t like any of the mainstream terms, so I always try to avoid qualities that will make my bikes fit easily into one of those boxes.” So what really pushes his big, orange buttons with this bike? “I love the black-on-raw aluminum engine. Honda only sold these engines in all-black, so this is probably the only raw aluminum one in existence. With the glossy, liquid black powder coated covers, the contrast makes the aluminum pop.” That, and our eyes too, Art. Can’t wait to see what you do with your next quarter.