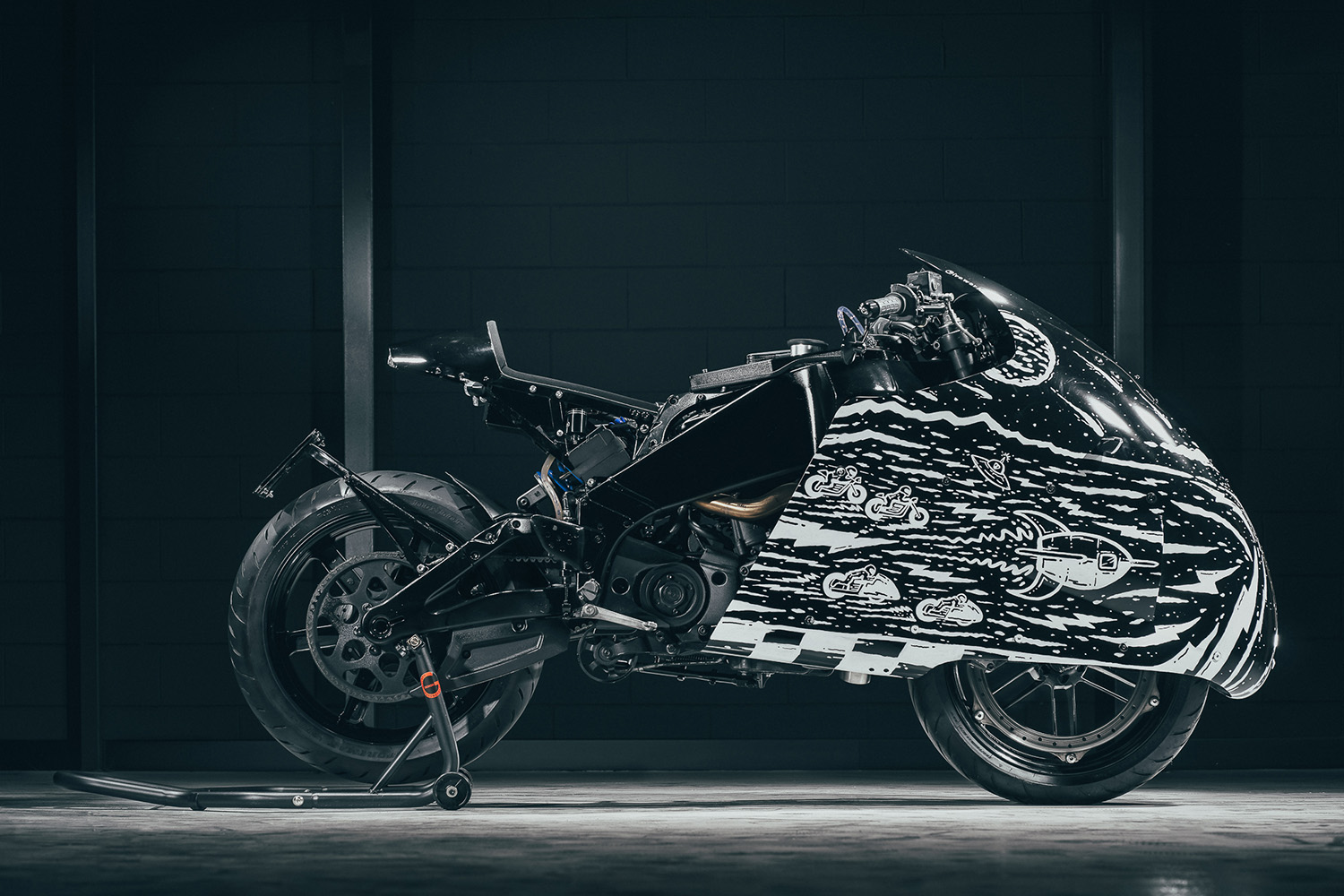 If you’re a fan of MotoGP and keep up to date with all the latest superbike tech then you know that the last few years have been dominated by wings. But it’s not a new thing, aero improvement to bikes goes back a long way and the dustbin fairing is the granddaddy! Giacomo Galbiati of Italy’s GDesign Custom Motorcycles however isn’t here to claim he’s made this stunning Buell XB9 more slippery through the air. It was all about giving the custom worlds artist de jour a bigger canvas, and the Renaissance man from Como has more than made the most of it with another stunning masterpiece.

The dustbin fairing really took off in the ’50s with racers looking for an aero edge on motorcycles that had no fairing at all. From the GP paddock to the legendary Isle of Man TT, sprint racing and drags, they were immediately fashioned and fitted to a host of machinery. But it wasn’t long before the FIM stepped in and banned them altogether and it was only in 2016 that Ducati found a loophole in the laws to start bringing aero back, this time with wings.

For our friend Giacomo, he’d had the big dustbin sitting around at home and finally when a client from Milan turned up with the Buell he saw a chance to use it! “I immediately thought here is another fantastic challenge, with my philosophy of art applied to two wheels,” he smiles. But before he could begin to apply the artistic paintwork, the ancient alloy fairing had to be made to work on the Buell and be rideable on the street.

Offering the fairing up to the American twin he realised a number of problems. The original shape was designed to sit low, great on the track, terrible for the street where practicality was still required. The other issue which had also plagued racers was the reduced steering angle with the bars wanting to bang the new metal. But with all the calculations drawn up and reliefs cut in to allow the handlebars to move freely, a set of steel brackets was fabricated that not only attaches the fairing perfectly but allows for its quick removal.

“Then came the fun part, now I had a grand canvas where I could develop art on two wheels. Together with my talented friend Francesco of Ivoworks, we have created a motorcycle for Space, where you can get lost in adventures that only this motorcycle can offer you.” UFOs and rocketships, custom motorcycles and comets burning up through the sky, the white on black artwork is a feast for the eyes. But look even closer and you see function fitted in, a pair of clear lens indicators poking their way through.

The crazy new design meant the fake fuel tank, the airbox cover as the fuel is in the frame, looked completely out of place. So Giacomo crafted a much lower and more discreet sheet steel item to cover over the area. The airbox is gone and the engine now takes its air through a single velocity stack that pokes through the top with the rider now getting up close and personal with the induction noise of the thumping twin.

Wanting to make the art work the central theme an exhaust redesign does away with the underslung factory muffler that is normally visible to all and instead flames fire to the ground, just protruding beneath the fairing. The same philosophy was applied to the last of the bodywork “I built a much smaller tail that gives more importance to the aggressive aspect of my idea of the Buell,” Giacomo explains. With the rear shaping back into a single round light that is paired with a set of indicators, all with clear lenses, and you have to keep reminding yourself this bike is street legal.

Now he had to find a place to hang a number plate from and mounted off the swingarm is a new wrap-around design that also serves as a tiny fender. A set of underslung mirrors also keeps the police happy and a phone mount adds a touch of practicality to the crazy contraption. Finally, the artist needed one last canvas and laid down a new design behind the instruments. With plenty of testing conducted in the mountains, Giacomo has created a thoroughly useable motorcycle that kicks convention to the curb and shows what can be achieved when you don’t just follow the crowd.