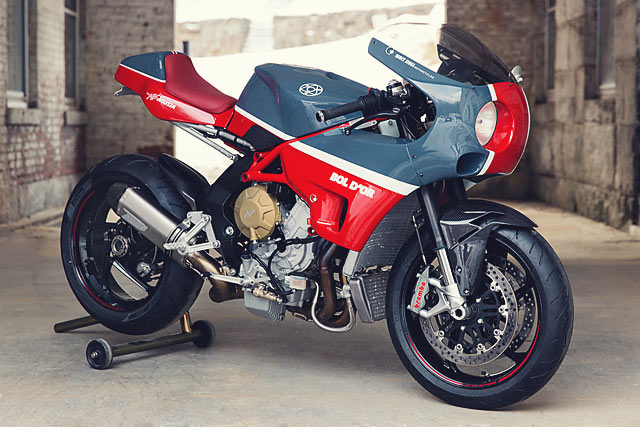 I had a dream last night in which I was a gun bike builder. I was living and working in a small, picturesque American town where it snowed in winter and the streets were lined with beautiful old trees. In the surrounding mountains, there were great riding roads that seemed to go on forever. My shop was in an old stone mill; I had a real eye for great-looking bikes and a set of hands that were able to create pretty much whatever I wanted. Except that this wasn’t just a dream. It’s everyday life for New England’s Walt Siegl. Here’s his latest dream bike, this amazingly cool MV Agusta F3 endurance racer. “My shop is located in a quaint little New England mill town called Harrisville, which is North West of Boston,” says Walt, to start things off. “It’s in a restored textile mill, which is in the centre of the town. I have a full machine shop, and all my projects are hand-built. I have two full-time, fully dedicated employees; Aran Johnson is a technical & electronic whiz and my right hand man. My wife, Laura, does everything else that isn’t related to the actual building of the bikes.” The donor bike was a brand new 2015 MV Agusta F3 that was built for a client (and now friend) named Roman. “MV Agusta is an iconic brand,” say Walt. “Their truly sweet 3-cylinder engine, among many other things, was a very attractive platform for a cool, 80’s-style endurance racer.” The bike is a part of Walt’s ‘Bol d’Or’ series, which see him transforming the F3 into a road-legal race bike. “In my experience, saving weight wherever you can always results in a better performing motorcycle. The weight reduction program for the Bol d’Or starts with the use of high-tech composites to replace the plastic OEM bodywork and gas tank. Additional weight reduction is achieved with our aluminum subframe, the lightweight performance exhaust system, and our WSM rearsets that are machined from 7075-T651 aerospace-grade aluminum.” A ram-air system was created to get the best out of the highly tuned Italian 3-cylinder engine. The diameter of the air intakes was increased and they were neatly tucked into the front of the fairing (below). To get the most out of these modifications and to obtain better torque and horsepower, the ECU has been flashed with a bespoke and fully tunable performance program. “Anyone into bikes needs to try riding such a lightweight motorcycle with its razor-sharp handling and the engine performance of the legendary MV Agusta. Being engulfed by a sound similar to that of a Formula One car is difficult to put into words. It needs to be experienced to be fully appreciated,” say a clearly inspired Walt. Keeping in mind that the bike is part of a production series, Walt says that the Bol d’Or’s build process is focused on creating the all-new kevlar composite bodywork, aluminum fairing stay and subframe. And after all this weight reduction, the machine’s suspension needs some serious upgrades, as the finished bike is significantly lighter than the factory original. “The hardest part of the build was to design the bespoke bodywork that is both all-new and visually cohesive with the factory’s chassis components. I had to create a clear reference to the brutishness of an endurance racer without losing the sexiness of its Italian heritage.” And by the glint in his eye, we can tell that the sheer, eye-watering performance is Walt’s favourite feature of the new bike. “It’s just a real animal when you get on the throttle. Its lightness and responsiveness makes it feel like a scalpel on the road.” Dreaming of owning one yourself? Walt’s order book is open, ready and waiting. This marks the eighth Bol d’Or build that he has undertaken, and by looking at all the bikes back-to-back, he’s clearly making each bike the perfect incarnation of an endurance racer while still managing to push the whole concept forward with every new build. We can’t wait for the next one.