When Diamond Atelier first burst onto the scene in 2013 with its inaugural BMW R80 project, it was abundantly clear that the two 20-something-year-old German builders possessed a near-prodigious level of talent and skill when it came to customizing motorcycles. And while the world-renowned shop has stepped out of the limelight for the majority of 2019, that doesn’t mean major moves weren’t happening behind closed doors. 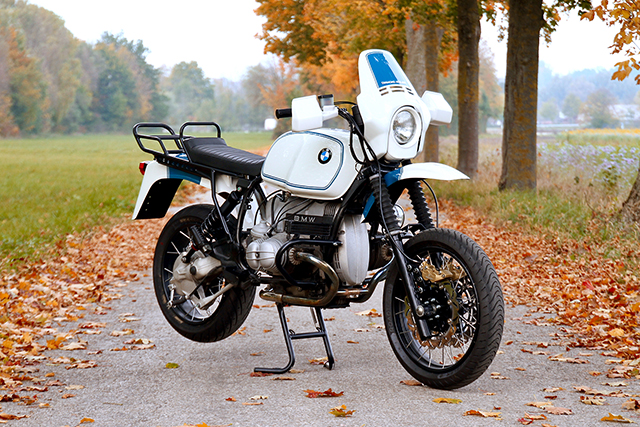 Tomas Konecny — one half of DA — has just unveiled his latest work, with this stunning resto-modded 1990 BMW R100GS. After spending the last few years building bikes that were largely ‘on trend’, Tom wanted to do something different and try building a scoot with the potential to stand the test of time. “I wanted to create something with the timeless characteristics of a true classic in the same vein as the Porsche 911 or Rolex Submariner,” explains Tom. 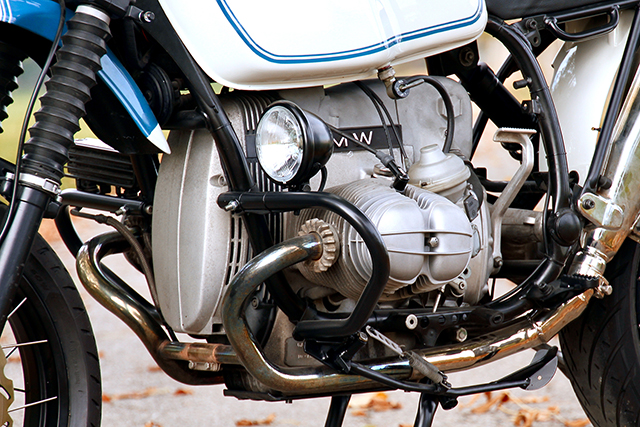 Based on his time and experience working at the Munich shop, Tom knew right off the bat that he wanted to use a BMW 2V airhead as the basis for the project, so after a bit of digging he managed to source a shockingly clean, first-owner R100GS specimen. “It only had  37,000km (23,000 miles) on it and it looked like it could have just rolled out of the BMW museum. Some would argue it was too good to be taken apart but this was exactly the donor I was looking for,” Tom admits. 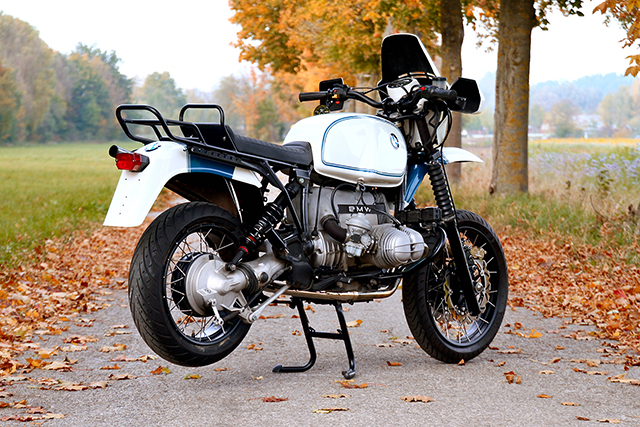 The chassis was stripped and de-tabbed prior to its subframe being shortened by two-inches, powder-coated in black, and then capped off with a custom leather two-up saddle that boasts waterproof stitching and three layers of foam. “The new rear frame was customized in a way that might not seem obvious, though it’s much cleaner and lighter than the original,” explains Tom. 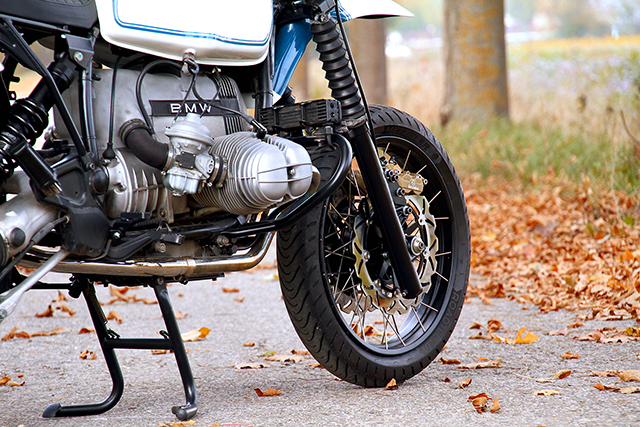 The suspension is less “resto” and more “mod”, with a fully-custom Wilber Nightline shock out back and matching custom progressive springs in front. Stopping power has been increased thanks to a dual 320mm petal rotor brake setup bit by four-pot Brembo Gold calipers held in one-off CNC’d aluminum brackets.

“In order to have the brake caliper adapters on the right, I needed to get another left lower fork leg and mill it down to fit the other side. This sounds a lot easier than it actually is, and with the cost of such a fork leg, the anxiety kicks the moment you start milling it in the CNC without knowing the outcome,” reveals Tom. 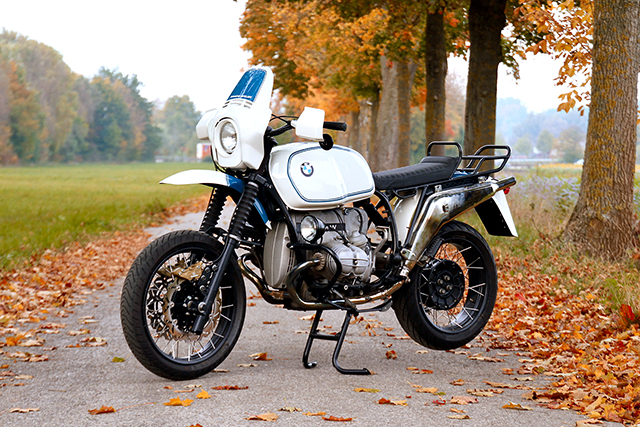 Steel-braided ABM lines now connect the new braking hardware to an original BMW brake pump that’s been modified in order to generate enough pressure to work with the upgraded stoppers. There’s also a CNC-machined fork-brace from Wunderlich that, like the rest of the forks, rims, and framework, has been powder-coated in black.

Instead of taking DA’s typical radical transformation approach, Tom instead opted for a more subtle — yet no less involved — process that would declutter and modernize the early ADVer while still highlighting many of the GS’s hallmark traits. So, the bulk of the bodywork was kept original though Tom swapped the stock tank out for a Monolever cell that’s been raised slightly in front and lowered a tad in back in order to achieve a dead straight line through the tank and seat. The rear fender was also raised up for what Tom calls a more “off-roady” look, while the front item is an original BMW Dakar fender. 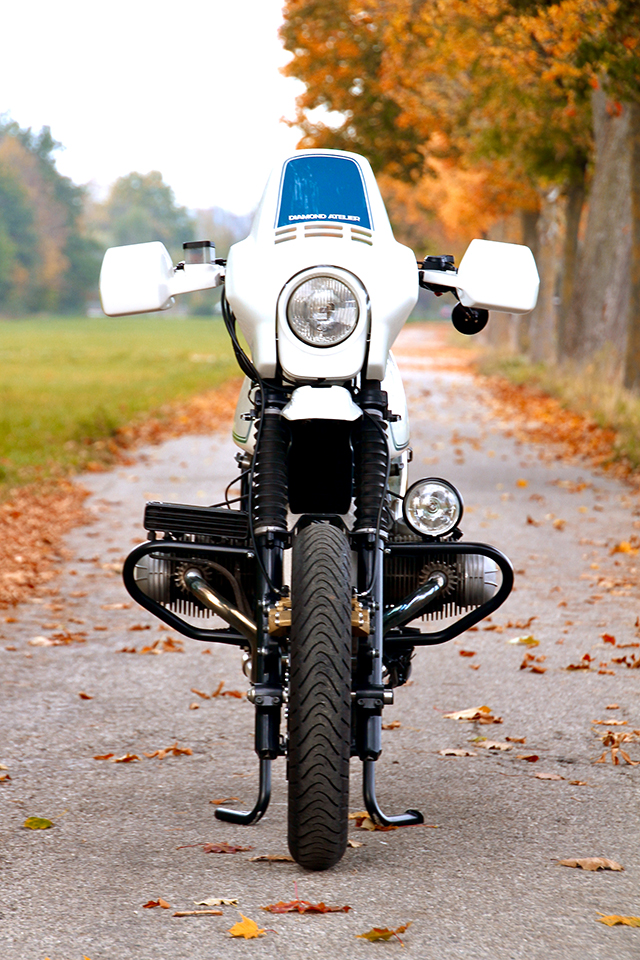 The revamped GS now rides on modern spoked wheels — a 2.50×19 front and a 4.00×17 rear, both wrapped in Metzeler Roadtec 01. “This setup is similar to what we used on our Mark II builds and it’s literally the best wheels you can mount on a classic BMW. Through a lot of trial-and-error we figured out the best spacing, lacing, and positioning of the wheels,” says Tom.

Despite the donor’s low-mileage, the air-cooled twin was torn down for a complete rebuild that included replacing the bearings, pistons, and a slew of other internals with original BMW parts. The Bavarian twin also got K&N filters paired with an R90S air-box and (top) engine cover, and the shaft drive and cordon tunnel were also refurbished for the project. 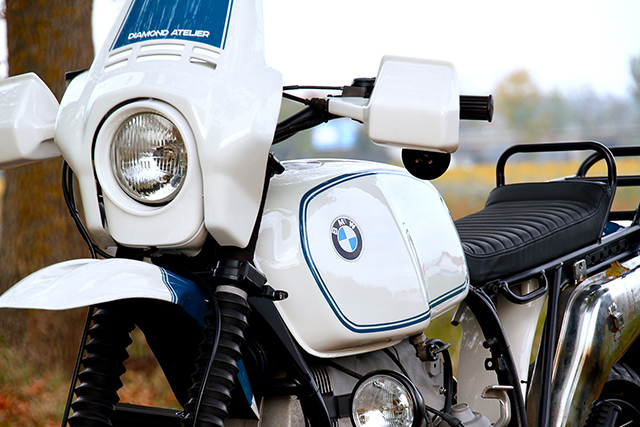 “I also got rid of the chunky and heavy mid-header silencer and replaced it with a stainless steel unit that hooks up directly to the stock, polished muffler, which I think is essential for capturing the true GS look. The carbs were re-jetted, too, in order to better work with the new airflow system and the free flow exhaust,” explains Tom. 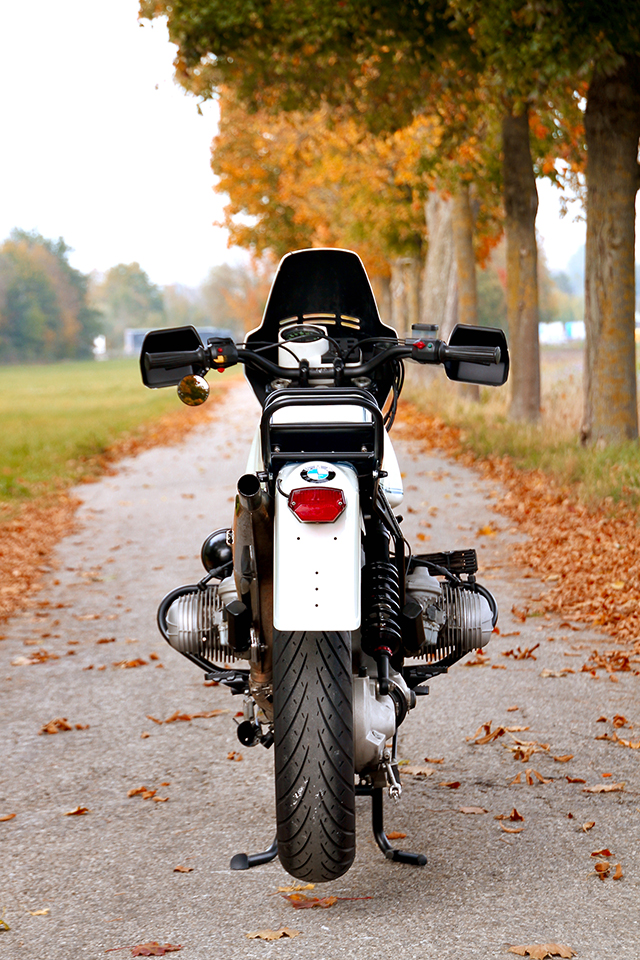 The stock bars were binned for an aluminum Magura TX unit resting in R nineT mounts fixed to a one-off CNC-machined top triple, and the original mirrors were jettisoned in favor of a single round aluminum billet unit hanging under the new bars. “I also added a side-mounted additional light on the left crash bar to visually balance the oil cooler on the right, and add a few lumens to the bike’s high beam,” relays Tom. 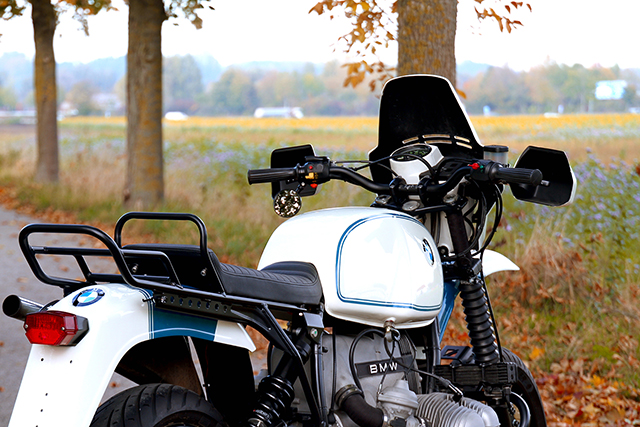 The BMW’s electronics also underwent an overhaul. There’s a new wiring harness discreetly running through the frame, as well as a small Lithium-ion battery stashed beneath the tank. Motogadget micro-pin LED indicators fore and aft keep things both tidy and street-legal. The gas cap is a one-off CNC’d piece made from scratch on a hand-lathe. 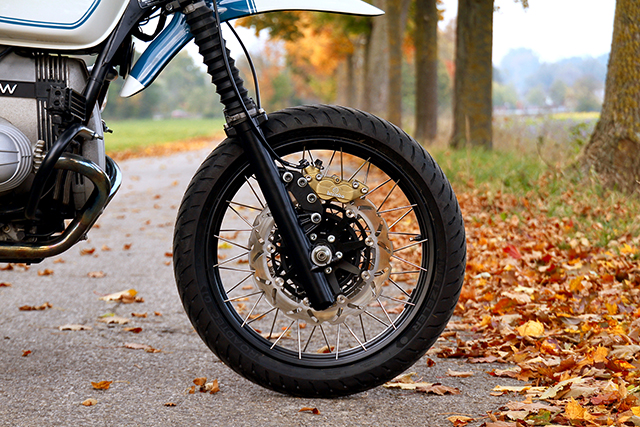 “The bodywork was painted in a 50:50 mix from original BMW colors, again remaining true to its origins, yet creating something unique. Half of the white is the classic “Alpina”, the other half is BMW Classic’s “Cream” – mixed together they come out in something just right for this bike. The blue-grey hand-painted stripes are from the BMW catalog, too,” says Tom.

And just like the original BMW factory Dakar racers, the inside/underside of the bodywork has been finished in a matte black to better mask any chips or dings from any kicked up rocks. 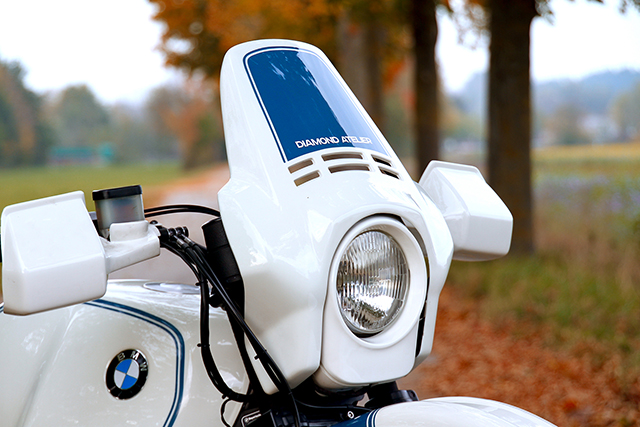 The end result is what its builder calls a “GS on steroids”. “It combines the classic feel you get when you think of a vintage BMW motorcycle with all the perks and benefits of a modern bike,” he explains. Tom’s transformation not only bolsters the GS’s appearance but also its performance prowess, with the Munich-based builder claiming the modified 1990 example to be “the best performing airhead BMW” he’s ever ridden… so far. 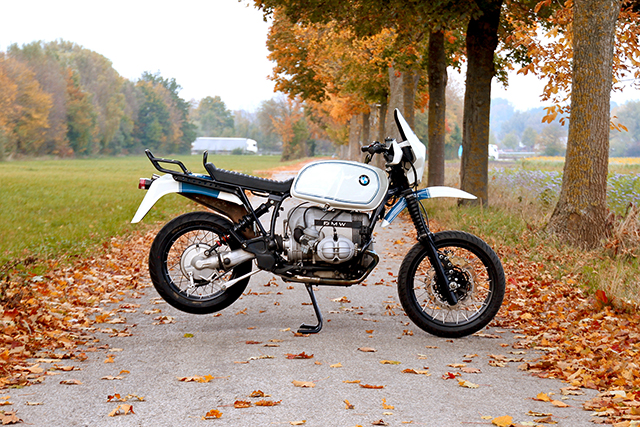