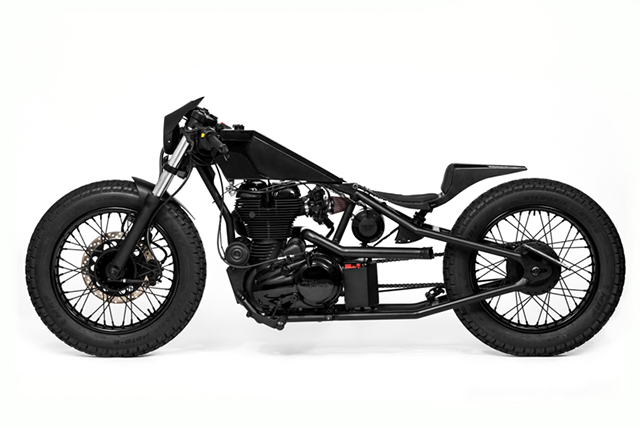 On the streets of India the cycle of choice tends to be the Royal Enfield. Reliable, easy to work on, spares aplenty, there is little that is not appealing about the retro motorcycle marque. Except if you want to stand out that is. Rolling out of India’s top new custom workshop, this bike is an idea executed with the mindset of a truly different bike being created. Scratch built around a late model Royal Enfield engine, Mean Green Customs have shown what it takes to stand out from the crowd, with their stealth bike concept. In a sea of Royal Enfield bobbers, this hard tail is something else, the mechanical engineer who created this masterpiece yearning to build something unique – and a chance to put his home made frame jig to use. On deciding to undertake a build, Aditya Green decided he needed to create something different to the current trend of bobbing Royal Enfield bikes. Being a mechanical engineer by trade, the Indian builder has the skills to scratch build a lot of components, allowing him to produce a bike in a style that is all his own. Starting off with the mainstream Royal Enfield engine, Aditya decided the standard OHC powerplant would suffice for motivating the machine. Slight performance mods are found the fitment of K &N pod filters on the air intake, and a custom block hugging exhaust system. With the desire for a stealthy look to the machine, the frame was built with ‘low and sleek’ in mind. With the custom frame draped so low over the engine, the 18 inch high wall tires utilised on the build hardly increase the height of the bike. The triple trees and fork setup has been made in house at Mean Green Customs, with the speedo housing as part of the top plate. Incorporated into the top plate as well are all the necessary warning LED units. Built into the front levers are LED units, to be used as front end indicators. Continuing the sleek lines of this sweet ride, the tank and fairings have been fashioned from bare steel, with the rear fairing taking a few attempts to get to the finish Aditya wanted in the build. This was mainly to follow the lines of the tank and seat, plus incorporate the two shocks mounted under the seat. Incorporated into the seat pan are the brake lights, covered in mesh to hide them when not in use. With two very different ideas working against each other – that of stealth versus standing out – Aditya of Mean Green Customs has managed to create something which is the best of both worlds. Utilising his engineering skills, he has shown what is possible with the right tools and mindset on a build. We’re pretty sure this bike will stand out on the streets of India – or any street in the world for that matter.