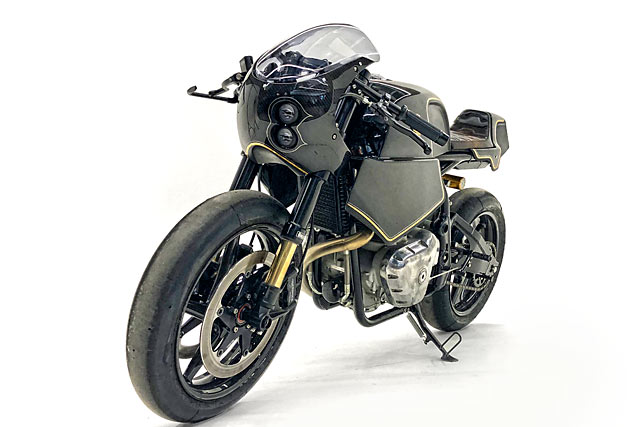 EXCLUSIVE: What do you get when a builder at the top of his game and a manufacturer with a game changing new bike cross paths? In this exclusive interview with Rough Craft’s Winston Yeh – done in his home city of Taipei – we talked with one of Asia’s best customisers about his new project done in conjunction with Royal Enfield, the local artisans who help him build his bikes and his very first foray into 3D printing. We kicked things off by asking him how he went about working with the revitalised South Asian brand that seems to be going from strength to strength. 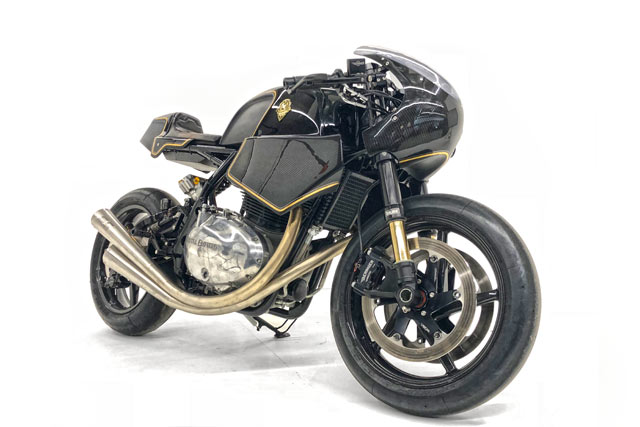 “For this build, it was very interesting because I actually got shown around the Royal Enfield headquarters and they told me what they are trying to achieve with this model. I’m surprised how much work they put into it. Most people know the kind of bikes Royal Enfield usually build, but for these new ones they studied which parts they needed to really pay attention to. By talking with them, I understood the approach they are taking. They have developed a very, very good engine and frame. If you have a good base and a good engine, you can do anything with it. That’s what this is about.” 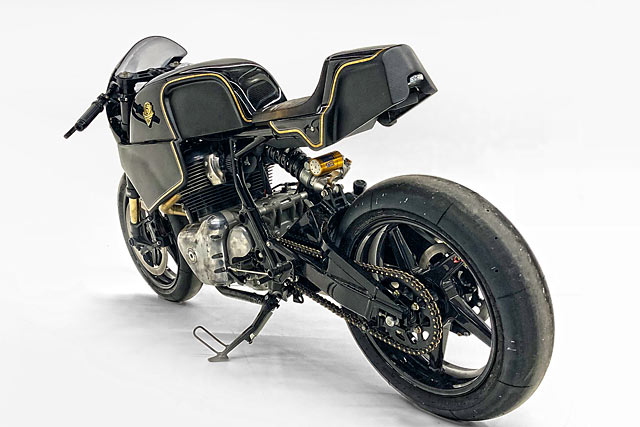 Those familiar with Winston’s work will know that he’s more of a Creative Director than a hands-on builder; so how does he do what he does? “Every time I get a new build, I think about the craftsmen and artisans I know. Through many years of working with them, I understand what they are capable of and what I can and can’t do with them. I am now able to design bikes based on their ability. And after they’ve worked with you for so many years, they get to understand what you want, too. In a way they grow with you.” 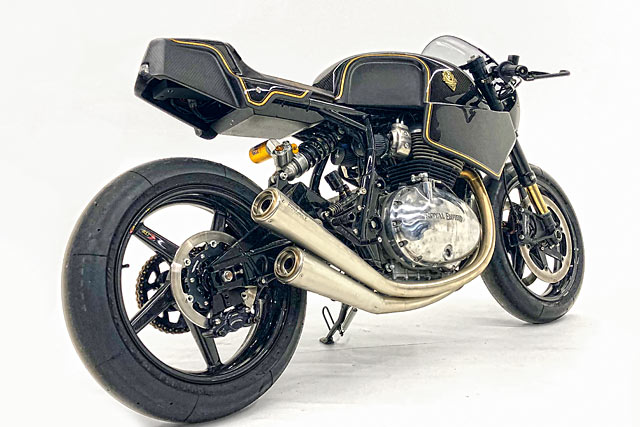 “This Royal Enfield Continental GT 650 started with a cafe racer stance already and what I decided to do was to emphasise that. After a discussion with Adrian Sellers, Royal Enfield’s Industrial Design Manager, we decided to do something based on a theme of endurance racing. Then the first time I laid eyes on the bike, I knew I needed to emphasise that crankcase – it is a beautifully designed piece. I wanted the design to be able to wrap around it and also to show how cool it is. So when we chose to do an endurance racer theme, I decided that the fairing should cover most of the engine, but it should show the crankcase. I also highlighted the curves with the twin exhaust pipes.” 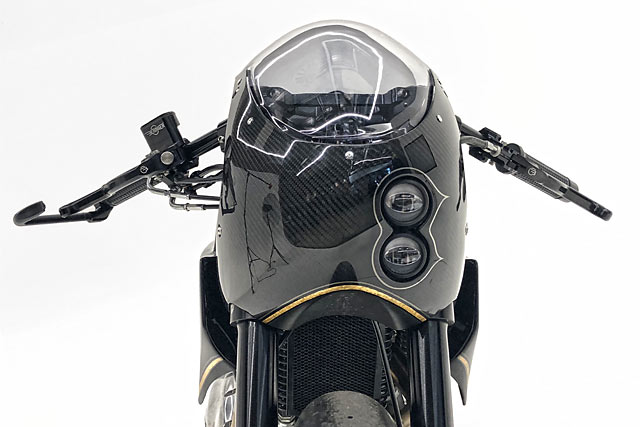 “I tried to do the theme with a twist, because with a traditional endurance racer you need a bigger front fairing to be able to cope with big steering angles. But I never liked big, bulky fairings so my idea was to do one that’s attached to the forks. There’s a strong line that goes through the tank so if you look at it from the side and you squint your eyes, you might think its continuous but in reality it’s separated. That gives you the clearance so you can just turn it like a regular bike and you don’t have that big, bulky fairing just to get the clearance.” 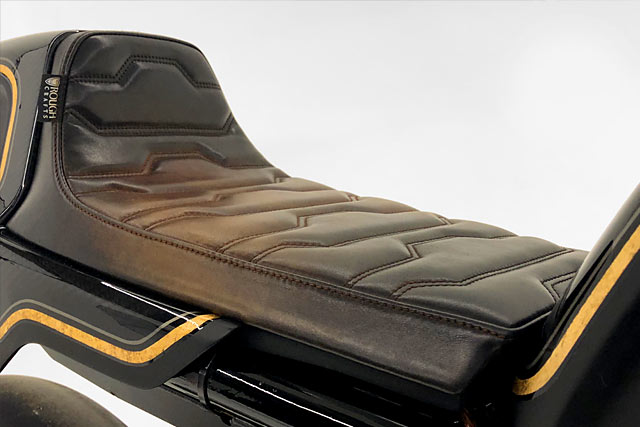 “The whole 3D printing thing is pretty new for me and this is the first time I’ve actually used it for a build. Because of my industrial design background, it seems natural to get involved with it. I found this guy from Taichung City and he has the equipment to print big pieces – up to 1 meter cubed – so he could print the whole tank with the wings in one pass. It was amazing. And looking at the finished bike now, I feel awesome. It’s like my baby. To be able to pull off something like that in a short amount of time; I’m super proud of it and proud of everybody in the city that I work with. They are phenomenal to be able to pull out all the stops like that. They did whatever I needed. They made it happen.”

[superquote]“The whole 3D printing is pretty new for me and this is the first time I’ve actually used it for a build.”[/superquote] 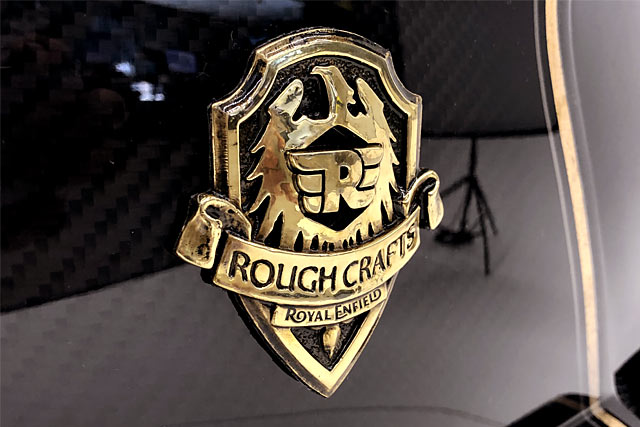 Running through the details of the build with Winston was just about as exciting as the bike itself. There’s blacked out Ohlins FGRT213s up front with CNC Racing triple clamps which are nicely matched to the Ohlins TTX GP TR469 shock out back. The swingarm is a custom item made by HPM Racing and the pipes feature SC Project silencers with headers by Banai Racing. The rubber at both ends are some rather serious Pirelli Diablo Superbike slicks which are slowed down with equally impressive Beringer calipers and discs. Topping things off are the HPM Racing foot controls, CNC Racing clip-ons and some Motogadget grips.

“I think for every corporate build, the hardest part is to understand their approach. You want to do something very special for them but you don’t want to take away from the bike they are trying to sell. So you really need to study what the designers wanted to push out to the market and then you do your very special version of it. You tell the story that the original model was trying to tell but in a special, more custom way.”

“It really took me some time to find the right balance for how much I wanted to change. You have to find that point between customising and showing the factory bike itself. It’s more like telling a story than building a bike. I think that’s really, really important. The most satisfying thing about this build was when the bike was done and I finally got to ride it. And I had the sense that I did the bike justice and it rides great. I’m really happy about it.”

“It sounds pretty good stock, but through the SC Project Exhausts – and I don’t know how much the bent headers help – it sounds amazing. I’m so happy with it. When I was riding through the city, we rode through some tunnels. It just has that growl. It’s not very loud but it sounds really, really cool. Maybe I’m older now but I don’t look for really loud pipes anymore. I think I prefer something that you can hear and you notice but it’s not too annoying and I think this bike has it. Overall, the 650 Twin is a really big breakthrough for the company. They wanted to go for better power and better everything and I think with this build, it shows just what the bike could be.”