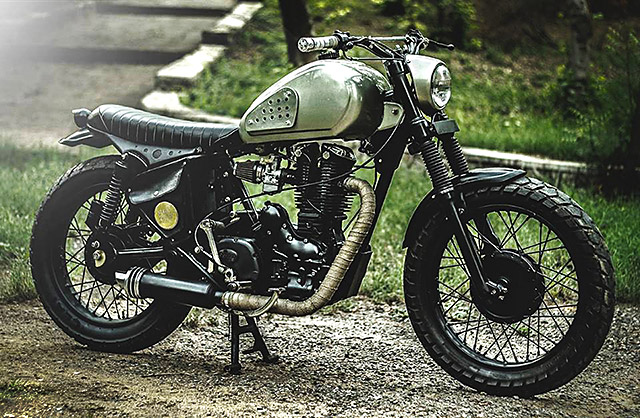 Royal Enfield motorcycles make a great platform for building custom bikes. Old school Brit styling, reliable single cylinder engines and factory spoke wheels. This is exactly what New Delhi based Bull City have done with their latest build, putting their skills to work on a Royal Enfield AVL 350cc, and producing something far removed from your everyday Enfield. With a build brief calling for an “old school thumper”, the Bull City workshop decided the idea has been done alot, and needs some special touches in order to stand out. That is why there is a rhino-skin inspired paintjob on the tank for instance – which I’m pretty sure is a first for Pipeburn. Stripping the mid sized thumper back to basics, the clunky factory fenders were replaced with shorter ones, and the frame shaved of all superfluous bracketry. The toolbox is gone, replaced with a leather carrier bag mounted above the shorty pipewrapped exhaust. New framework has been mounted on the bike, and the battery box is sheet metal unit fabricated up by Bull City themselves. At the front end sits a set of custom built T riser bars, adorned with a unique headlight surround enveloping the Yamaha RX100 headlight. The handlebars are Proracer items, mounted up with aluminised grips. Rolling stock is made up of 18 inch rims, with 120 profile at the front and 130 profile at the rear. An impressive aspect of the build is the metal work carried out. The 22 litre fuel tank is a one off special, along with the ‘lightweight’ side plates. The foot pegs have been made from Royal Enfield engine internals, adding to the overall metallic touch to the build. This is matched with the fuel tank cap fashioned from a main shaft sprocket. From the front to the back, there is little that hasn’t been aesthetically touched up over the course of the build. With much of the metal work coming from Bull city’s own workshop, this Royal Enfield is definitely a fun looking ride. We’ll leave the last word to Bull city: ” We wanted to build something you’d imagine riding across the Himalayan foot hills and also something you could take out for a beer without a second thought.” We’ll drink to that.