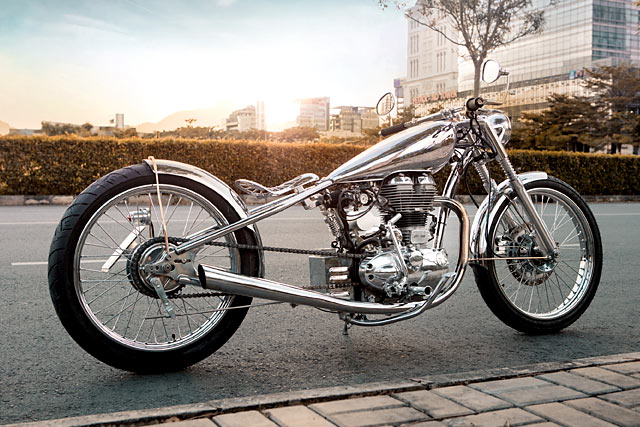 Let’s not beat around the bush; Bandit9’s critics have been many and varied. They called out the shop by insisting that all their bikes were nothing but Photoshop renders. They questioned their creativity and even suggested they stole ideas. Such is often the fate of those who choose to rock the boat. But for shop owner Daryl Villanueva, none of this really mattered. Like anybody with an honest-to-goodness mission in life, he knew where he was going and what he was doing. And hey presto, the Petersen Automotive Museum, The Haas Moto Museum and the Barber Vintage Motorsports Museum have all agreed by opening their wallets. Here’s his latest piece of magic – a Royal Enfield Classic Chrome Bullet he calls ‘Merlin’. 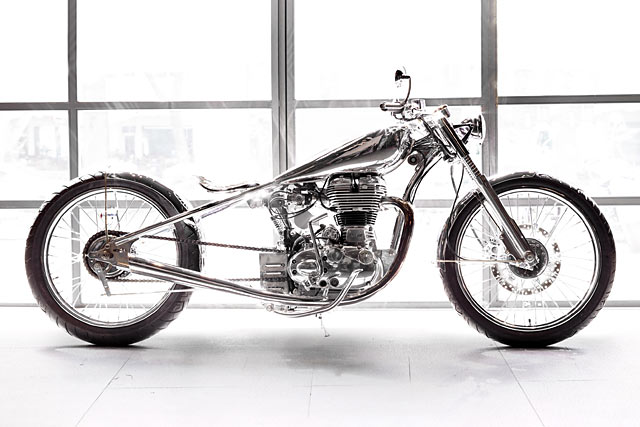 “It was an interesting year for Bandit9,” says Daryl with more than a little understatement. “We were fortunate to be part of the Custom Revolution exhibit at the Petersen Museum in LA. Then we got a call from Royal Enfield to work on a couple of projects with them. I really consider us quite blessed. I’ll take some time during the holidays to reflect on where we’re going. We’re tackling apparel in 2019; We still need to crack that. Maybe I won’t get a holiday after all.”

The inspiration behind Merlin was a little unusual; a luxury timepiece. “We wanted to create a very complex piece hidden behind a simple, familiar and legible form. While the face of a watch is beautiful, to connoisseurs, it’s the movement inside – the way it’s made and its heritage that they appreciate. We wanted to approach Merlin in a similar fashion. We wanted to make sure it’s something you could pass on, hence its simple, timeless format.” 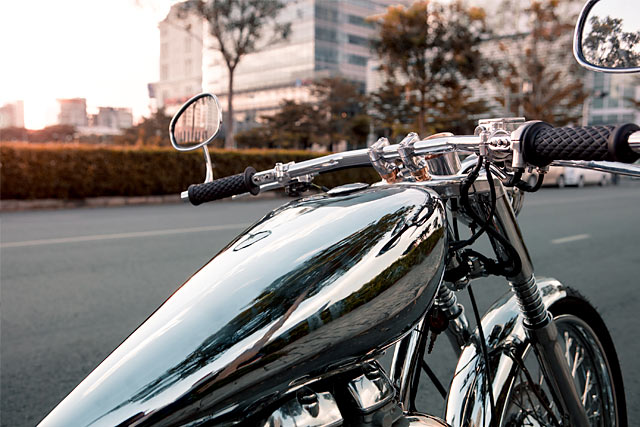 Besides an incredibly ambitious timeframe of 3 months, Dazza says that the hardest part was the design itself. “I thought the Bullet was perfect. I love it the way it is and I told the gentlemen at Royal Enfield that I actually did not want to touch it. So I had two choices: don’t touch it at all or completely revamp the motorcycle. Thankfully, they gave us the freedom to do our thing.” 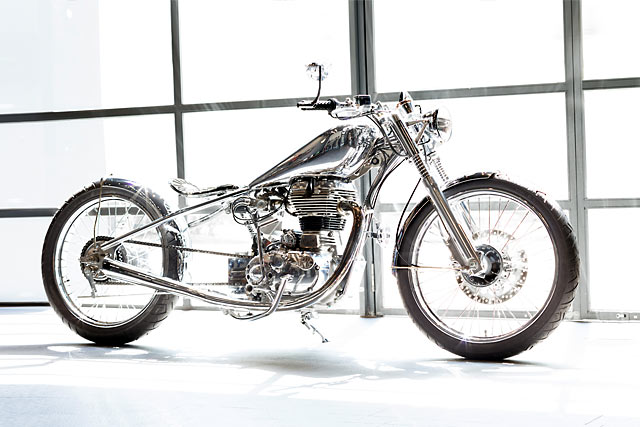 With a limited timeframe, the team had to pick their battles; changing the proportions was really important to how they saw the finished product, so the frame was re-designed to a hardtail with a nice swoop at the bottom. “We just let the teardrop tank and exhaust follow the frame to keep the lines of Merlin neat. We also cleared the rear to keep the visual mass of the bike in the center between two 21 inch wheels and created fenders that really hug the tires.” 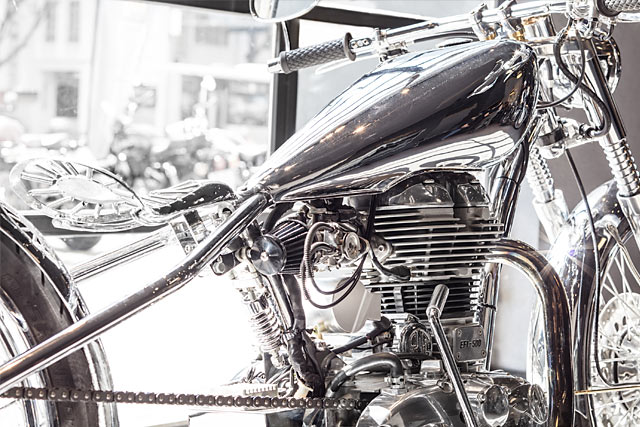 “We spent the majority of our time with the small parts. The seat is from the underside of an old Vespa saddle with the springs attached to a frame. We had to resize and reshape it to complement the rest of the bike.” Like the exhibition (or glass) backs of expensive watches that expose the internal mechanism, they decided to do away with the leather cover and leave the springs exposed.

[superquote]“We spent the majority of our time with the small parts. The seat is from the underside of an old Vespa saddle with the springs attached to a frame.”[/superquote] “The speedometer was of obvious importance and again, we looked at some fine watches to see how we could adapt their ideas to the motorcycle world. Personally, I’m a fan of Panerai watches and I’ve always loved the radial nature of their dial. It catches light in a mesmerizing way. And we engraved Roman numerals on the dial in place of the usual Hindu-Arabic numbers.” 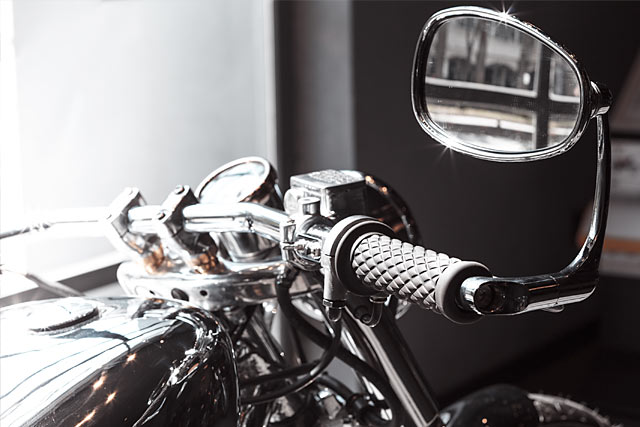 After whetting our appetites for this wrist watch speedo, Daryl continues his glowing description of the bike’s jewel in the crown. “The case is made from steel and tapers subtly at the bottom. The bezel is made from polished bronze and should get a nice patina after time.” It pains us to say that after all that, there wasn’t a photo available at the time of publication. We’ll see if Daryl can’t help us out with a shot. UPDATE: he did – click here. 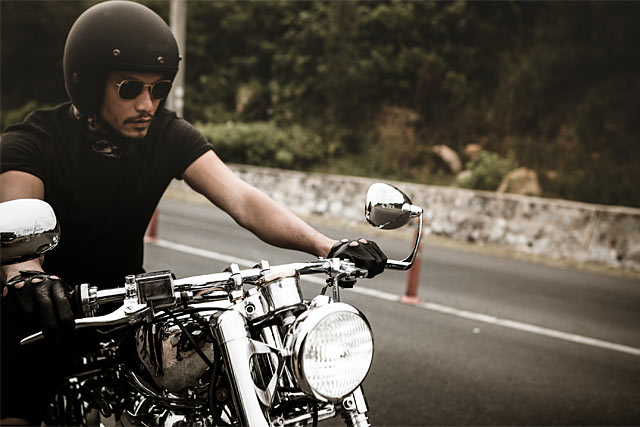 Of course, this dial is Daryl’s favourite part of the bike, too. “It’s nice to spend time on a single detail. If we didn’t have time or budget constraints, I could’ve spent far more time on it. I would’ve figured out how to use sapphire crystal instead of glass. Maybe I could have given it a crystal magnifier so it could show the speed digits like a watch magnifies the date. It’s details like this that I would love to add, but the real world demands you ship your products out,” he sighs. Stupid deadlines. 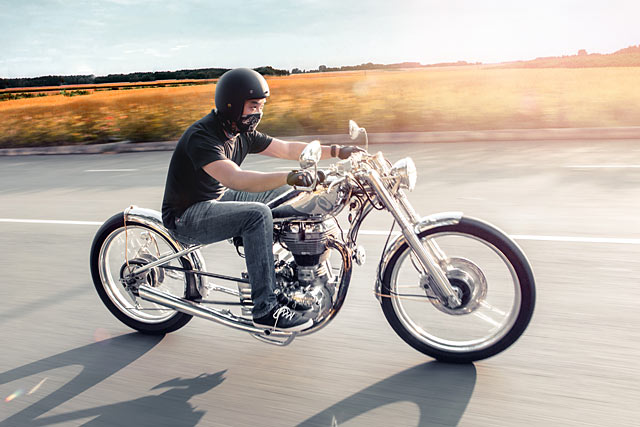