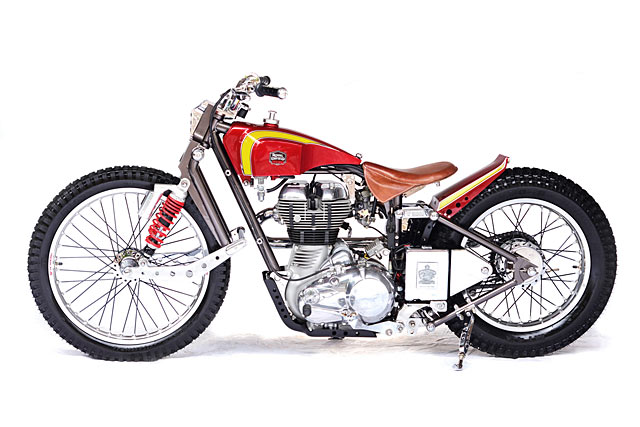 One of the best damn things to happen to the custom scene in years is the rise of the developing world. Countries in South America, Central America and Southeast Asia have been smashing builds out of the park. Builds driven by a level of craftsmanship and dedication that leave westerners in their wake. Nobody shows it better than Indonesia’s Darizt Design and their latest creation, a Royal Enfield 350 speedway replica dubbed ‘Royal Dirt’. 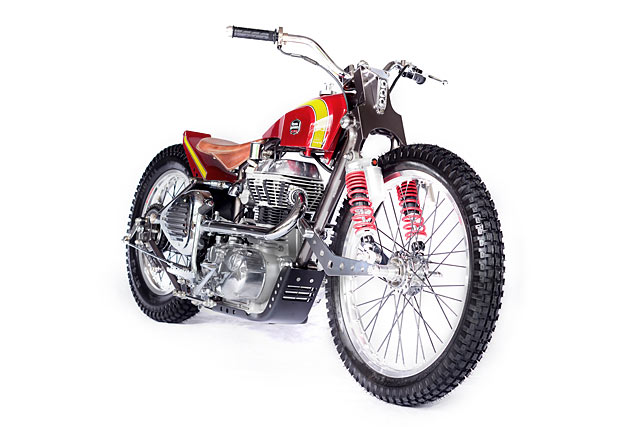 The bike itself is the result of the ‘Re-build 2017: Classic Challenge’, a design competition run by the good folk at Royal Enfield Indonesia. A whole bunch of local bike designers threw their hats into the ring, with Darizt’s speedway-inspired sketches making earning him a donor bike. Understandably. While chieftain of the small shop, Agus Darizt, has mountains of experience behind him this build would be different: He had only two months to complete the entire bike.

Yeah, I know you and I can chop off a tail and push on an exhaust in two months but Darizt does things differently. He builds everything from scratch. Hell, the only real standard components used on this bike is the 350 Bullet engine and the wiring loom. So while the broad concept sounds simple, a speedway-inspired Royal Enfield, Darizt had his work cut out for him.

With only two months to work with Agus decided to give himself a head start – he jumped right into making the frame, headstock and suspension system before the donor bike was delivered. Every second counted. 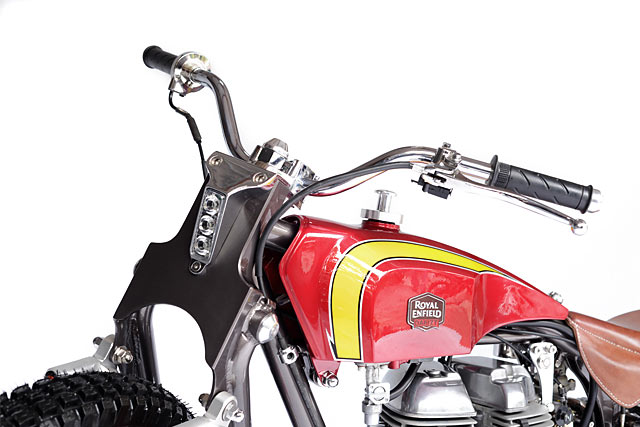 “The headstock is made from solid steel tube that’s 7cm in diameter,” Agus says, “while the frame is made from 1 ¼” steel pipe with 10mm steel plate for reinforcements and engine mounting brackets. The rake angle is 27 degrees, which I thought would be ideal for daily use”. 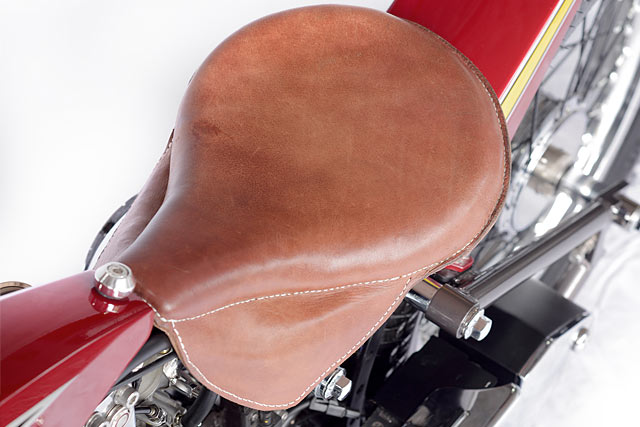 Not content with making the entire frame from scratch, Agus decided to tackle the suspension as well. “The front end is an Earles-style fork, a variety of leading link fork,” Agus says. “It’s made from pipe the same diameter as the main frame while the rear is like a girder suspension that keeps the rigid frame look. That’s from ¾ inch steel pipe and 10mm plate for the links”.

[superquote]“Not content with making the entire frame from scratch, Agus decided to tackle the suspension as well.”[/superquote] 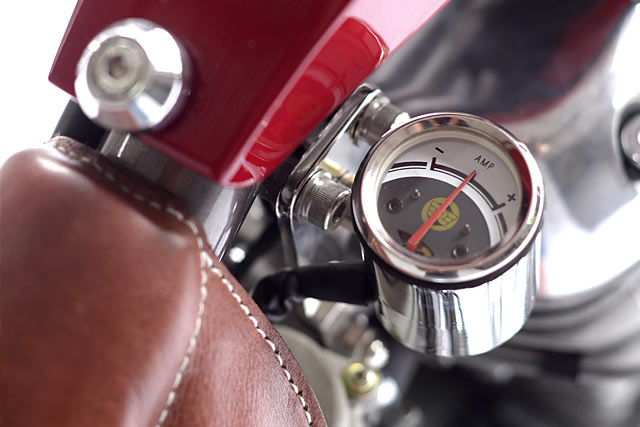 “It’s a type of suspension I haven’t worked on before, which was the hardest part of the build in order to achieve stability and a comfortable ride”. It wasn’t an easy process to get right. “I had to adjust the links point and proportions many times to get the result that I wanted,” Agus adds, “Let’s just say practice makes perfect”. 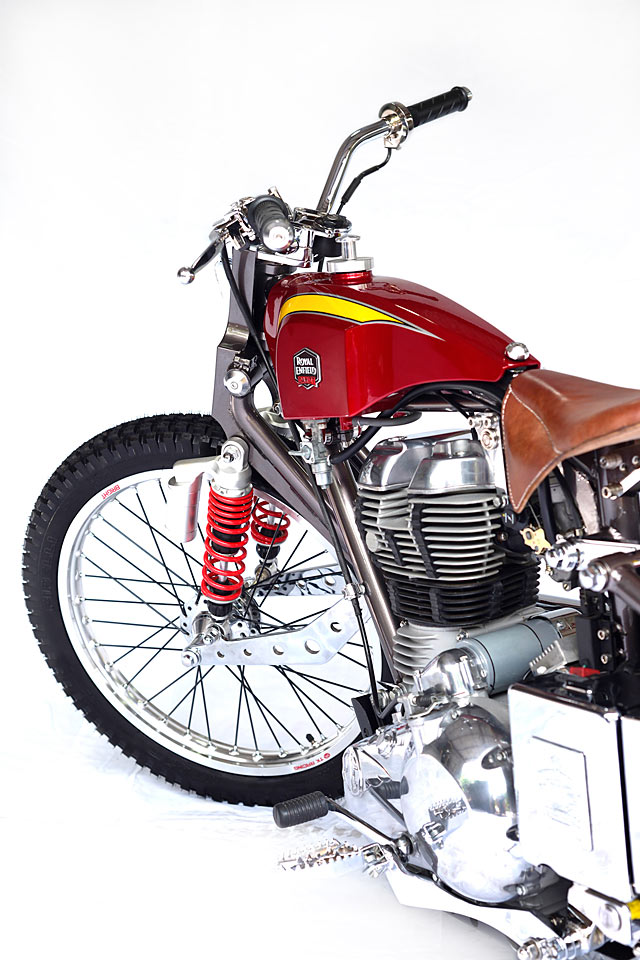 There’s some off the shelf parts used when called for. Attached to the suspension is a front hub is taken from a Suzuki GT175, while the rear runs a standard Royal Enfield hub redrilled to take 36 spokes. The front shock is from Ride It while the rear takes a YSS unit. Both hoops are fitted with Pirelli MT43 trials tyres, rounding out the speedway vibe. 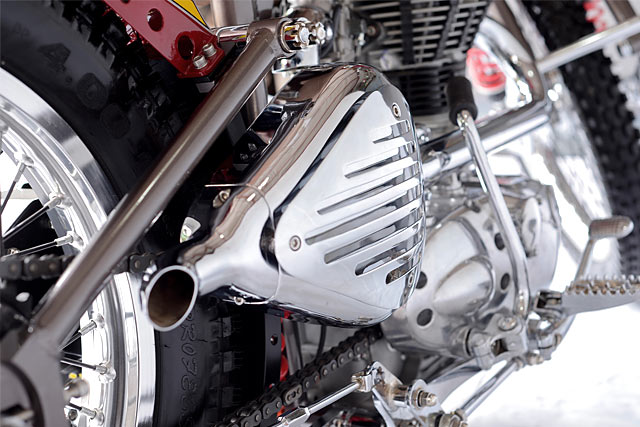 The fuel tank, inspired by both Speedway and Japanese VMX bikes, was handmade from 1.2mm mild steel and painted in-house. While one of my favourite features of the Dirty Royal is the exhaust, hidden in a chromed housing meant to resemble the standard Royal Enfield battery box. That’s bloody nicely done. 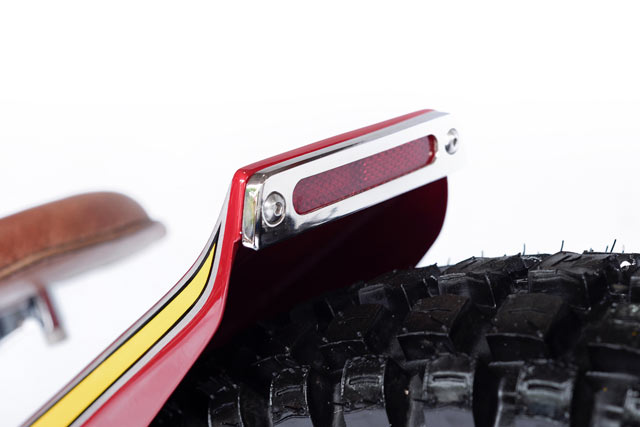 “In a design, whatever the field, there is a tendency to make something that just follows the trends of what is happening,” Agus says, “And in the field that I work in I try to make designs that a different from most people”. Agus has certainly done that. From design to completion the Royal Dirt is one of the tidiest bikes we’ve featured this year.