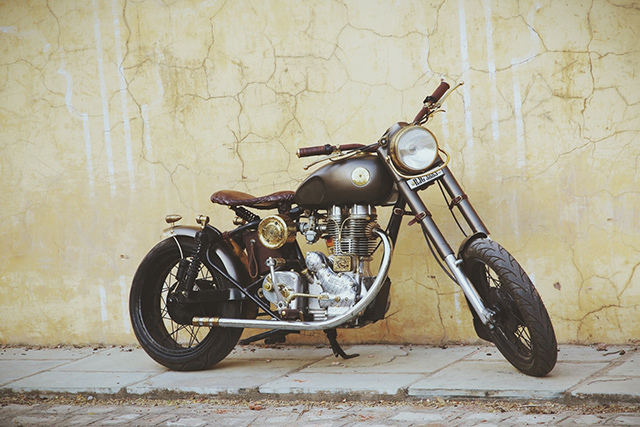 Dreamed up in the war time era of the 40’s, built in 1980’s India and customised in 2014 using bronze making techniques thousands of years old this Enfield has one hell of a story to tell. Customising a bike for the first time was a harder road than builder Chetan Yadav of Sisaka Custom Motorcycles ever imagined and getting his hands on his favourite bike was just the start. It was a journey a year long, testing his patience, requiring MacGyver like resourcefulness and taking lessons from builders past and present, but what he has constructed is a 1983 Royal Enfield like no other. It’s hard to put your finger on just what grabs your attention first, but that front end certainly isn’t what you normally see on an Enfield. Painted, polished and extended it gives the bike the bobber stance Chetan was going for. A lesser builder would have been content to leave it there, but to add to the look the rear frame has cleverly been extended further stretching the stance of the bike. The seat is pure bobber, a colour matched leather wrapped solo with single coil spring and setup to give him the riding position just as he desired. The fuel tank is heavily customised and unique touches are cleverly fabricated in and then there is the bronze… The bronze gives the bike a distinctly Indian look, utilising the nations favourite metal to fashion high quality pieces that adorn the bike and with thousands of years of bronze making tradition the level of detail does the history justice. From the exquisitely engraved headlight surround to the ornamental air filter, wherever you look is a piece worthy of being its own unique sculpture. From the bold gas cap to the delicately crafted levers, the rear tail light and indicators and the kick start, each piece has been lovingly formed. But it’s not all in your face, there are the front indicators that you notice only after admiring the bike for considerable time, the subtle oil lines and that rear fender that reminds you custom bike building really is an art form. To steer his ride around the rapidly growing city of Gurgaon, Chetan utilised a set of Yamaha FZ150 handle bars that have been leather wrapped, matching grips and bar ends made out of you guessed it, bronze! Hiding the ignition key and battery is the industrial tool box, it to wearing leather, while further enhancing the bikes bobber credentials is the painstakingly hidden wiring loom. Keeping the rider informed is a Vintage Smith replica speedo that makes picking the age of the biker even harder. While the custom exhaust with bronze accents makes sure heads are snapped around in time to see the Enfield coming. The wider than stock rear tire is a 150 section plucked from a KTM Duke and fits snuggly on the custom laced and painted rim. In a scene of many bikes where a few distinct styles often rule the roost it can be easy to get caught just following the pack. But inspired by his favourite builders, influenced by his culture thousands of years old and determined to build the bike he’d always envisaged, Chetan put the rule book aside and like the sculptors of old, he fashioned something truly unique. A leather bound, bronze clad steed that has this Royal Enfield riding at the front of the pack!