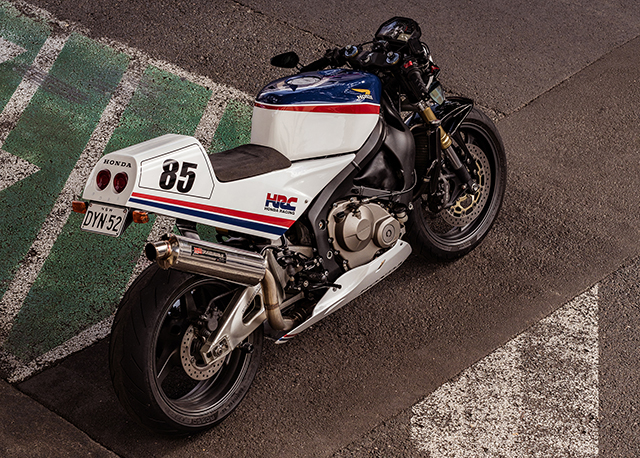 If you’re old enough to remember, then it’s impossible to forget the 1980s GP bikes ridden by the likes of Wayne Gardner and Fast Freddie Spencer. But building one today is nearly impossible, try finding a 500cc two-stroke for a decent price and you’ll be left scratching your head. But Australia’s James Campbell has come up with the next best thing. Utilising all the performance of a modern SuperSport machine, a 2006 Honda CBR600RR, and transforming the look to give it that proper nostalgia feel. 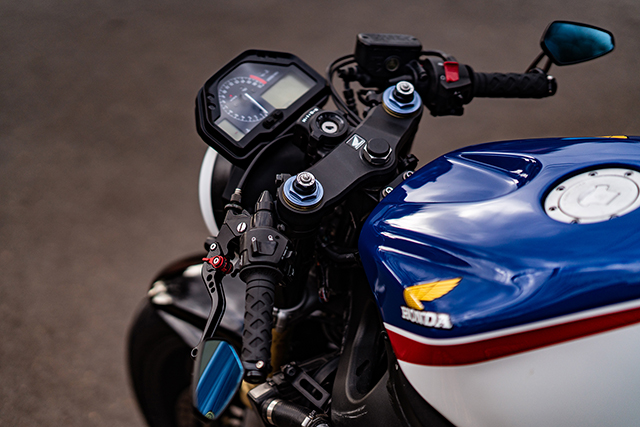 James was always going to be a motorcycle freak, he got his first ride at just 5 years old and as he tells us it runs in his blood, “My father is an engineer and my grandfather an inventor, I grew up in a very fun environment. Building things in the garage and working on stuff with my Dad, this probably laid a foundation for my future career in aircraft maintenance. For 15 years I have repaired and modified aircraft and along the way I have picked up many skills which I now use to build custom motorcycles in my garage.” 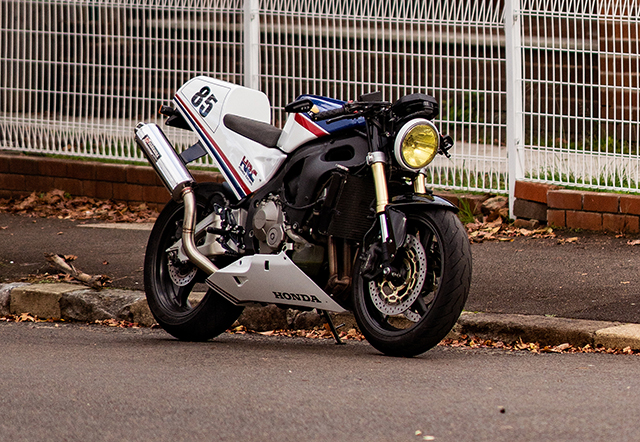 But there is no room for creativity in the aircraft game, you’re given a repair scheme and you do exactly as it says. So that’s where the bikes come in and James knew what he was after, “I wanted to build something that wouldn’t have looked out of place on the track back in the day, but may be taken a spill and been put away in the garage for the past 30 years.” As a donor bike the CBR600RR makes all the sense in the world, quick, reliable and relatively cheap to buy. 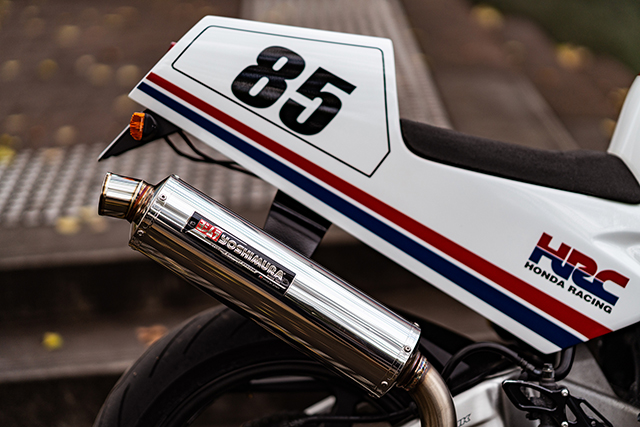 Plus it met the other criteria of having a removable subframe and a tank shroud so a new fuel cell wouldn’t have to be made. So to start his modification transformation James set about crafting a new subframe to suit what he had to come. Over the top he’s assembled a tail unit made up of no less than 10 handmade parts to complete the final piece. Crafted from a mix of fibreglass and carbon fibre; it’s no easy task with moulds having to be made that fit the modern machine mountings while giving the ’80s look, before painstakingly reproducing each part and assembling them as one. 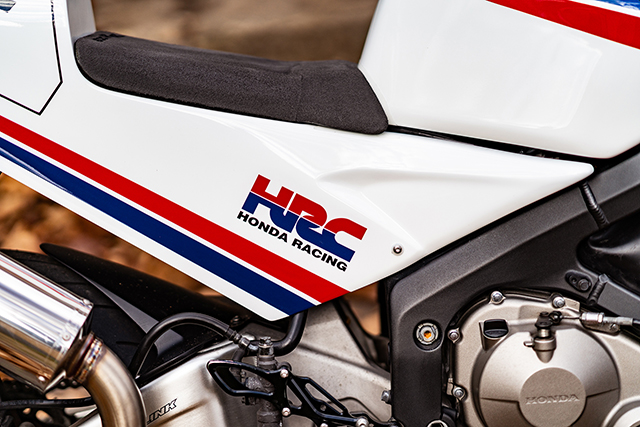 Not content to just do the rear end, the next challenge was to create a tank shroud. To make things a little easier he started with a fibreglass race unit and then customised it to fit his own unique specifications. “I added the hump at the back and had to fill a massive cut out on the front of the shroud where the race team previously had easy access to the ECU.” While underneath the engine the belly pan ensures the look isn’t top heavy and provides the right balance. 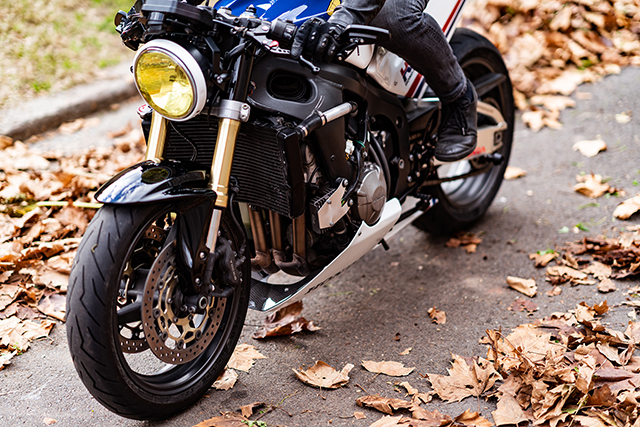 The all-important paint job started with James making a rough design on paper, a ‘scribble’ he calls it. Before this was handed off to Sam Muldoon of Colourfuel to bring it all to life. And boy did he nail it, from the period correct colour palette to the flawless graphics; the only thing that’s missing is the smell of two-stroke in the air. The looks completed thanks to a yellow lensed headlight that’s mounted tight up against the suspension. 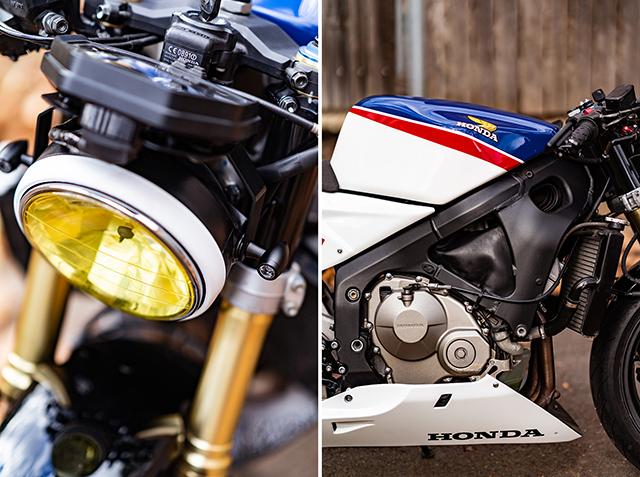 Those front forks are part of what makes the CBR such a good buy in the first place, being 41mm fully adjustable inverted items with easily replaceable cartridges. With the rear adjustable shock controlling the RC211V HRC race bike replica swingarm. While the wheels are wrapped up in Pirelli rubber and 310mm discs clamped by 4 pot calipers has the handling and stopping power far surpassing the ’80s look. 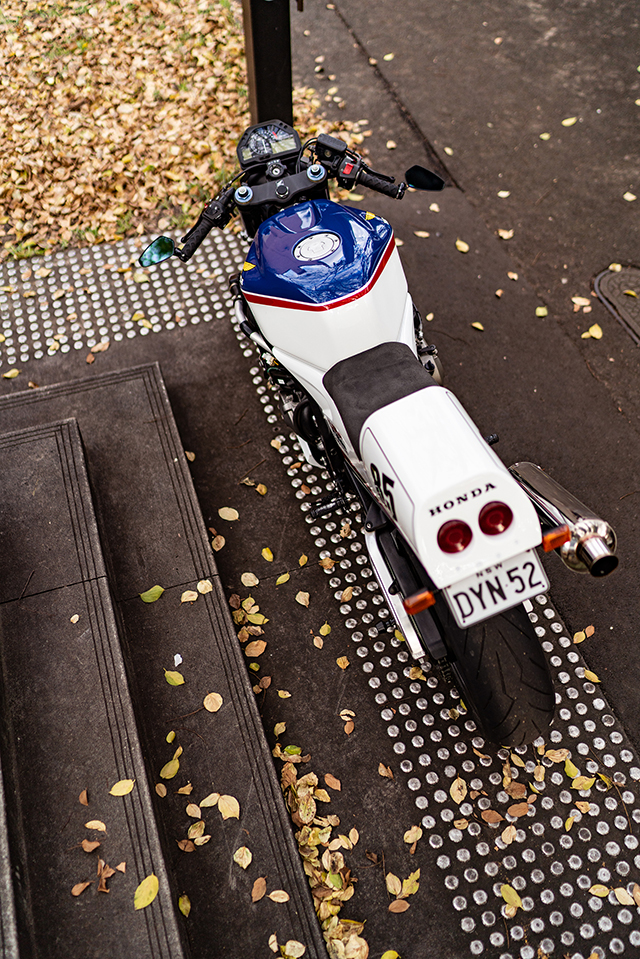 Spitting flames is the Yoshi muffler that James cut down to suit, that is joined with the factory headers thanks to an awesome link pipe fab’d up by James Sinclair of SpreadCheeseFab. The wiring has been redone and tiny indicators are bolted on to make things road legal, while the stock instrument cluster is re-mounted for a cleaner look. With cheap decade old sports bikes now flooding the market Campbell shows the way to utilising their brilliant performance while riding in the style of your childhood dreams. 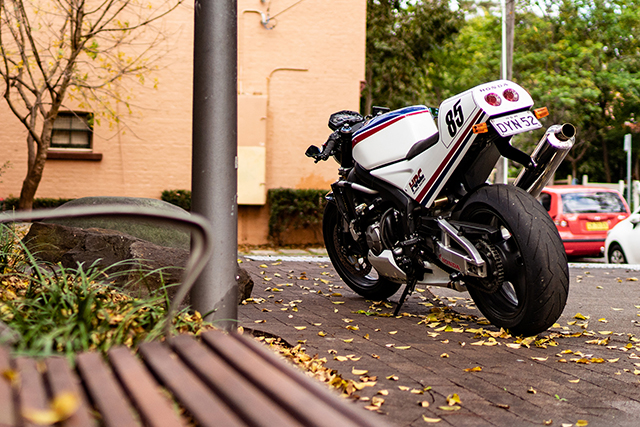 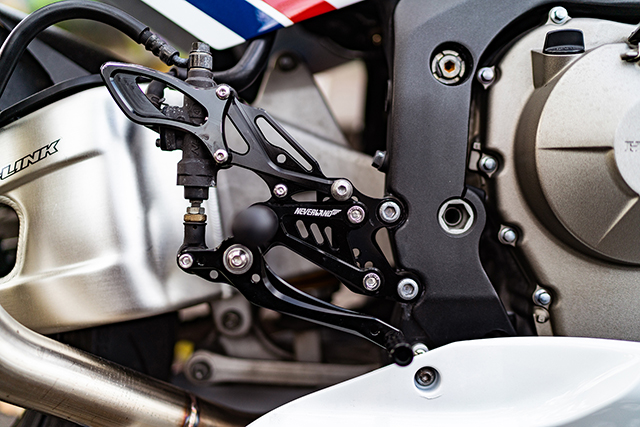 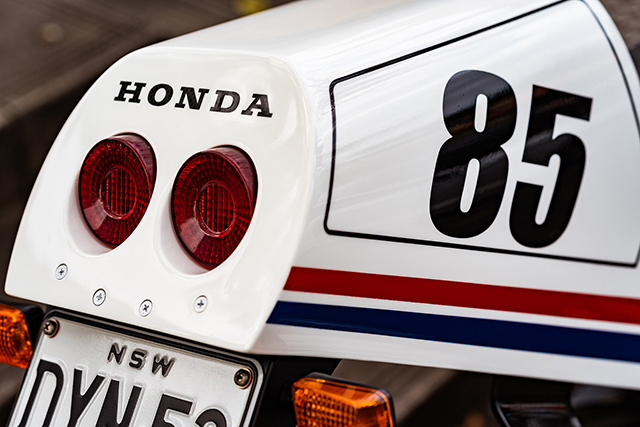 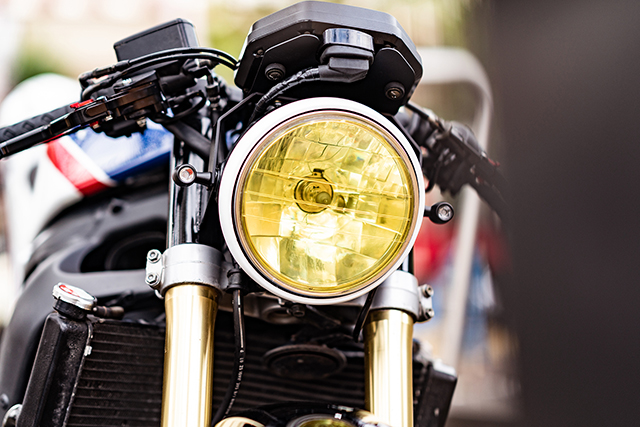 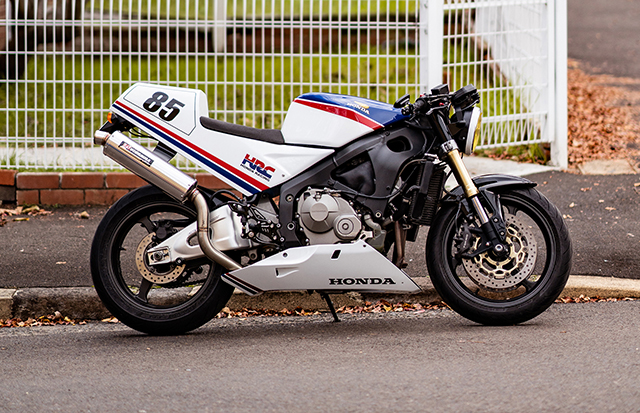