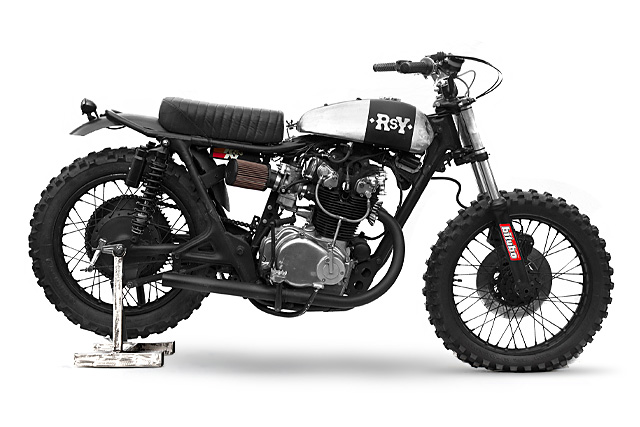 Every industry has its personalities. The leaders. The entrepreneurs. The strong, silent types. The worker bees – and of course the rockstars. When it comes to the world of custom motorcycles, the latter position is more than adequately filled by the two Italians who make up Anvil Motociclette. To say they bring a little Mick Jagger and Steve McQueen to our scene is a gross understatement. San Marco and Phonz may spend their days with greasy hands building cool motorcycles with their own sinister edge, but they’ve also starred on TV, been featured in Italian Vogue and Rolling Stone magazines and collaborated with a fashion house on a line of leather jackets. But let’s not forget that what got them noticed in the first place was their bike building abilities, and it should come as no surprise that on any given Sunday they can be found racing bikes and going fast; something which their latest weapon, the “Rusty Quattroemmezzo”, does in style. Based on a 1972 Honda CB450 the name comes from the state they found one of the major parts of the build in and quattro e mezzo means four and a half. Ok, so like everything it sounds better in Italian and our friends from the land of love and passion get the most joy out of hard work hand crafting custom creations; they wear their hearts on their sleeve and their company logo tattooed over their heart. But there was nothing at all romantic about the condition in which they found this particular ’72 Honda. It would need a complete rebuild but would also serve to pay homage to the proud racing heritage of the Honda 450 engine that had to fight politics and corruption just to make it to the track when first released in 1965 as Honda’s first “big” motorcycle. “We wanted to honour this historical model, improving its functionality: not only suitable for street circuits but also for off-road,” explains Marco. To get the build started the bike was pulled down to a bare frame with all the body work sent to the naughty corner where it would stay. Any rust was removed, bad welds re-laid and the subframe shortened with an up-kicked hoop welded in. All the bracketry that wasn’t going to be required was cut off and the entire frame ground smooth before getting a coat of hard-wearing matte black chassis paint. The reason for ditching all the standard bodywork is made clear by Marco, they weren’t going for a Honda recreation but a style from a specific time, “We wanted to honour this historical model, improving its functionality: not only suitable for street circuits but also for off-roads! We got inspiration from its competitors such as old BSA and Triumph’s often used in Californian desert, from which they got name as desert sleds.” The first of the new body work to go onto the bike was inspired by images of Steve McQueen’s race bikes and the flat front number plate wraps around the forks for a clean look in a dirty environment. The tank was found after the build had begun and is taken from an old endurance prototype racer from the ’70s and when the boys found it, she was stuffed. Or so they thought, despite the fact it was completely covered in rust and looked to be unsalvageable, a thorough sand and clean showed the metal cancer hadn’t spread below the surface and along with a new tank they had a name for the bike! Still showing battle scars from its racing days the tank was mounted with some custom tabs at the front and a raised bracket at the rear. Its small capacity gives a true dirt track look and the paint work is typically understated as all Anvil machines are with a mix of raw metal and matte black revealing the custom logo. The front is typical of flat trackers old and new, sans fender, while a custom fender is mounted out back to the stock cross brace on the frame. That fender also gets extra support from the new frame hoop, a nod to the BSA Victor Special that saw huge success in the mid ’60s when piloted by World Scrambler Champ Jeff Smith. It was from this same machine that Marco and Phonz drew inspiration for the seat, not wanting to simply follow the trends on the internet but create the generously padded look of the period. The bars follow suit with a much more pulled back angle than seen on modern trackers and fitted up with classic grips, the bike starts to look like it’d have a home in McQueen’s collection. “The quick throttle is an old Tommaselli Daytona, giving to the motorbike an old-fashioned look.” While a pair of dirt bike footpegs not only hits the visual mark but makes sure the rider’s boots don’t come flying off the peg when charging hard through wet, muddy conditions. Of course the lovers of leather made sure their favourite material even got a run on this track bike and if you look closely enough you’ll see it’s tightly wrapped on the kick-starter. The engine it boots life into is of course the classic 444cc Honda Twin that finally gave the Japanese company something they could truly take into competition against the best of British. Knowing they’d be using it regularly on the track the engine was given a thorough rebuild from top to bottom and the rotating mass balanced. But to further assist high rpm operation the inner sprocket cover was recessed to allow the fitment of an oil pump for increased lubrication and oil pressure. The stock induction is 32mm Keihin carbs which, like any factory item, are a compromise of fuel efficiency, ease of starting and smooth operation. But with outright power in mind these have been swapped out for a beautiful set of Dell’Orto’s with accelerator pumps that suck their air through sizeable K&N filters. The exhaust is typical Anvil, simple, straight and black with the separate pipes for each cylinder sporting baffles towards the end of each section that is hung from the frame and finished with a straight cut.

While the sprocket cover was off it was also polished along with the right hand engine cover, with speed holes drilled in the sprocket side and into the blacked out shifter. A new front sprocket was fitted up with the custom length black chain now spinning up a massive 60 tooth rear sprocket so that even on the smallest of tracks the bike can be ridden in the upper gears where more torque is on tap. To get that power to the ground the boys reached out to Bitubo who made a custom pair of rear shocks that have drastically improved the bikes handing. With external reservoirs, adjustable preload and adjustable rebound and dampening the bike can be fine-tuned for each circuit or road condition the bike is set to tackle. Up front the stock forks remain but have been rebuilt and the springs replaced with more of Italy’s leading suspension company’s components. A traditional racing flat tracker would of course lose the front brakes but with the desire to race the bike on a range of circuits the rebuilt standard item remains in place. The wheels of course had to be spoked items with rebuilt hubs laced to new rims that have all been given Anvil’s favourite paint job, matte black. To get a tyre that would suit them well on the dirt while still being soft enough for sealed surfaces Marco and Phonz selected Michelin’s Scorpion in a mid-soft compound, measuring 18 x 120 out back, with a rut friendly 19 x 100 up front. When it came time for testing the boys had no doubt their build would do them proud but you’ve still got to take to the track to find out, “We tried it both on a flat track and endurance circuits, we can say it has totally passed the exams with honours.” So why the need for an old school brake light you might ask, well in a small attempt at road legality because when they’re not building or racing bikes, posing for the cameras or on the TV screens Marco and Phonz love nothing more than taking to the back lanes to find a field to play in. Which means both on their machines with the front wheel in the air and in the grass with their girls who of course sport model good looks, it’s all in a day’s work for the rockstars of bike building Anvil Motociclette; tough gig!