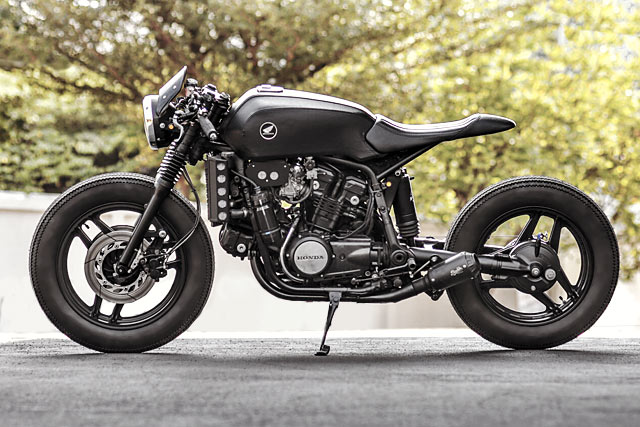 Oh the ’80s. It was a decade when the planet got so many things really wrong, including the fashion. Unfortunately, that extended to motorcycle design and history has not been kind to the machines of the period. So despite Cycle Guide predicting that the Honda VF750S Sabre would be the bike of choice for the next ten years to come it proved to be more Video Killed the Radio Star than Jacko’s Thriller. But what those years of dodgy hair and shoulder pads really needed was just the skills of a master craftsman. Today, Thailand has such a man, Eak of K-Speed Customs, who’s taken this ’80s horror show and turned it into the most badass Honda “Sabre Racer” ever created. It’s literally fit for a movie star. In fact Thai actor, Somchai “Tao” Khemklad, action hero of such films as ‘The Gangster’ and ‘Demon Warriors’ is the owner of this very machine. He came to Eak with the desire for a bike he could use in his upcoming TV show, and given the genre it had to be the right mix of street cred cool and aggression. So in making his bike selection, Eak went for what he calls a “Big Bike” platform.

“It is a motorcycle that has an engine of more than 399cc. I love the big bikes because I have ridden them since I was 15 years old. At that time, big bikes in Thailand were very unique. You’d seldom see them on the road. Normally Thai people only use 80-100cc mopeds for their entire life,” explains the king of the K-Speed empire. In the VF750S, Eak found a machine that actually has a lot to offer. A powerful V4 engine, a mono shock Showa rear and twin disc front end. It might be an early ’80s machine, but that’s what a modern Honda GP bike uses to win titles. Ok, so I’m stretching things a little. But what really kills the mood on the stock Sabre is the awful styling and the excess weight, and it’s here that Eak would spend the majority of his time transforming this custom ride. First thing to go was the ridiculous rectangular headlight. The huge gauge cluster was next to hit the workshop floor and with Eak on a roll, the scrap pile continued to build. With a bare frame to play with, a new subframe was constructed from round steel that drastically reduces the rear end’s length while also slimming down the profile. Where once an enormous amount of body work hung needlessly off the bike’s back, now the simple seat ends neatly inline with the rear axle. The seat might be relatively simple in design, but it is beautifully finished by a friend of Eak’s who is clearly a genius with leather.

So, happy with the seat result, it gave the K-Speed wizard an idea as to how he could best tie in the new seat with the original tank. Wanting to stick to his famous all-black colour combination, Eak also had his friend wrapped the entire factory Sabre tank in a matching leather.

The Honda badges and chrome filler cap stay, but now the much maligned gas tank’s styling has a softer, almost CB750 feel thanks to the hide’s texture and flawless stitching. To complete the transition between the two, small blacked-out mesh inserts allow the frame’s metalwork to take centre stage. To get the stance right, the 37mm telescopic forks with Honda’s anti-dive TRAC have been lowered before being treated to a lick of matte black paint and a pair of gaiters. The Pro Link rear end with a Showa air-dampened shock was revolutionary for its time, and now on full display it looks better than ever. That’s thanks to more of K-Speeds seemingly endless supply of black paint. A shade that’s also been applied to the smoothed and ground shaft drive swingarm. Of course, what made the VF750 such a breakthrough was that brilliant V4 engine with 748cc of sheer engineering brilliance. Burdened with the stock weight, the 90º twin cam lump never got to show its true potential. But now that it’s on a diet, it’s ready to scream.

The V4 delivers that signature twin cylinder low-end torque with four cylinders top end power, and you can hear it all thanks to a fully custom exhaust that finishes out in GP-styled mufflers. The collection of centre-mounted dual draft carbs can be complex to deal with, but tuned right they’re good for nearly 85hp @ 9500rpm. The rest of the engine is a text book example of how to stylise a motor once known for its ugly appearance. The big radiator cover is gone, replaced with smaller side covers that are circle drilled and back filled with contrasting mesh. A similar theme is extended to the air intake covers that remove the need for the two big air boxes that once projected out of either side. A sports drink bottle takes care of overflow duties, and the motor also copped a good once over of matte black before being bolted back in.

To give Tao full control of his new beast while filming on set, a host of modern components were added where they really count. The stock pedals are long gone, and in their place are a set of race-inspired rearsets with custom linkages. With the addition of clip-on bars, the controls have been upgraded too with Frando brake and clutch master cylinders taking over. While a little vintage touch is added with classic switch blocks for a simplified experience and old school British grips.

The lighting goes the opposite way, with a 21st century array of tiny LED indicators at all four corners. Although tucked under the seat, the tail light is full vintage spec, while the evergreen single headlight with smoked out shield gives a trick cafe racer touch.

Wary of the public’s recent reaction to pipe wrap and Firestones, Eak has avoided both and specially imported a set of ‘Fuckstone’ rubber for the front and rear. Look closely, we’re not joking. Just how Thailand’s TV censors will handle them is anyone’s guess, but what cannot be questioned is K-Speed Custom’s ability to turn the proverbial sow’s ear into a Honda fit for entertainment royalty… so long as it remains matte black.