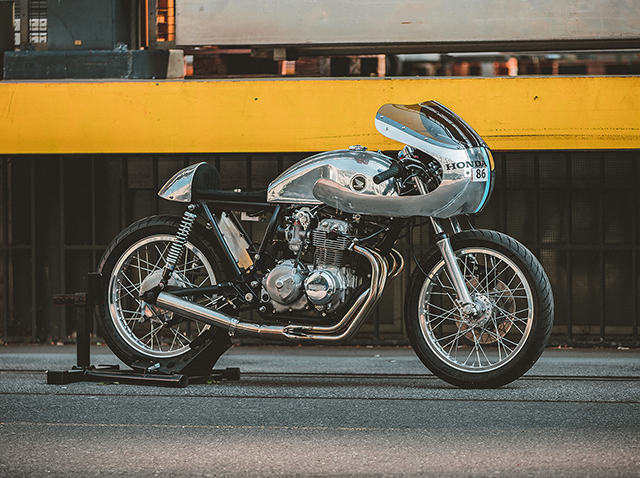 For a university student who just wants to build motorcycles, all that time stuck in front of a computer can suck the life out of you! Unless of course you’re Marc Vertesi and you cleverly convince your professors that building a race bike would absolutely make sense as your Masters of Architecture thesis project. Joined by his brother Philip, a Physiotherapy student, they run 2VMotos in Lausanne, building and repairing classic customs when their heads aren’t in the books. So, inspired by European designers of the early 20th century comes this peer-reviewed racer from the bones of a 1976 Honda CB400, aptly named ‘Schienenzeppelin’. 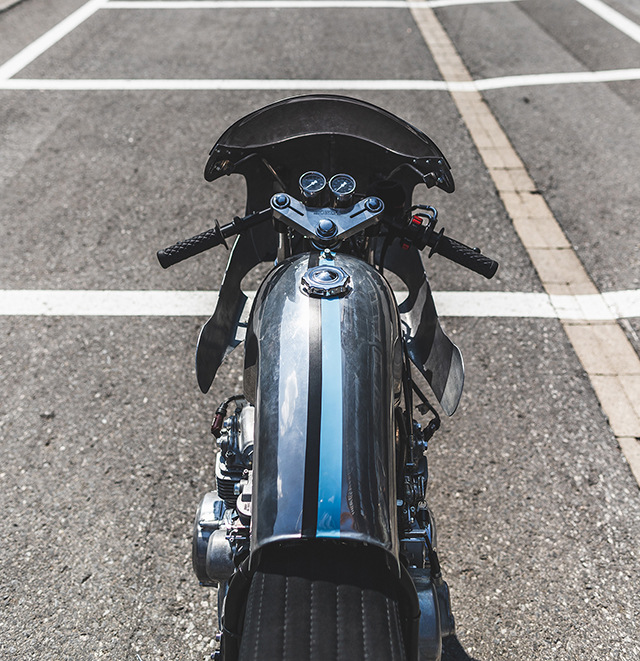 The motorcycle journey for the Brothers started early when at 14 their father bought them a clapped out old Moped and let them loose on the tools to bring it back to life. Passing on his passion for all things two wheels the boys haven’t looked back with scooters soon replaced by more serious machines. But when a “two-day build” of a Honda CB250 left their old man without a place to park his car for months, it was time to make things official and move 2VMotos to a permanent location. With a shop found they headed for the mountains to see a retired hill climb champion about some bikes. 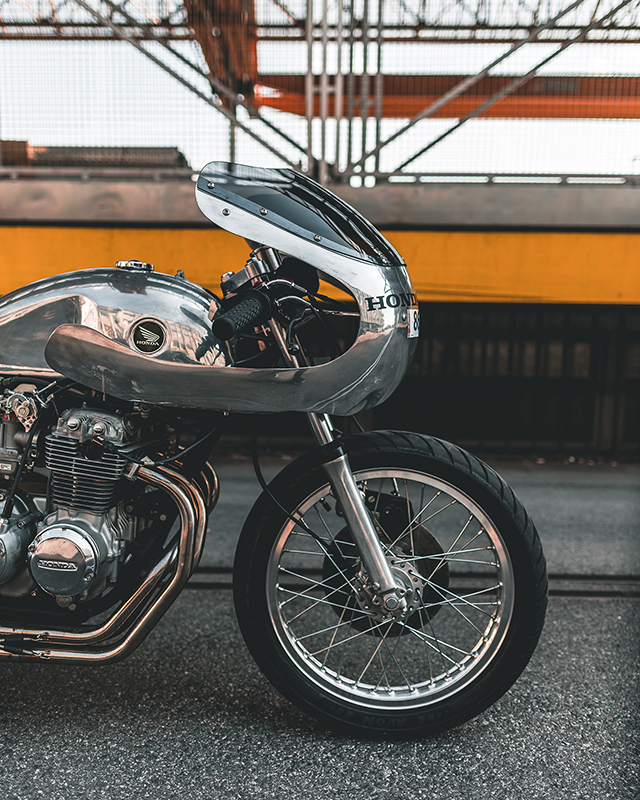 Here they struck gold, his property was littered with sheds full of motorcycles, parts, trophies and a lifetimes worth of memories. With the Honda CB400 and another bike picked out and loaded onto the trailer, they had to find the original paperwork, without it you simply cannot register a bike in Switzerland. The day turned up nothing and they headed home hoping the old man would one day send it, the CB sat for months silent, but that paperwork never arrived. So with the professors on board with the thesis proposal and the boys heavily influenced by the Bauhaus movement and incredible aluminium machines like the rail rocket Schienenzeppelin, it was down to work. 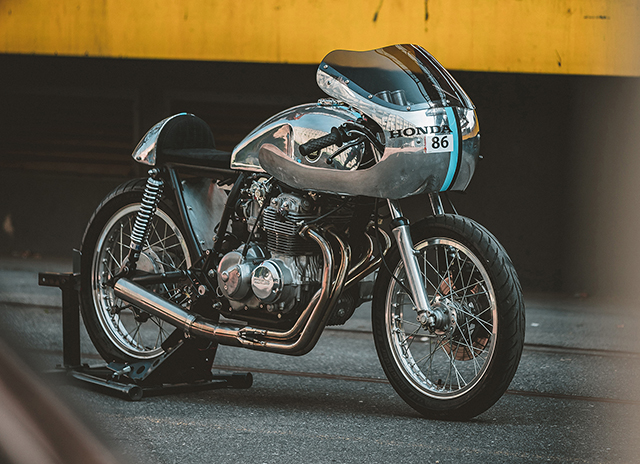 Proving, for now, the sword mightier than the pen, the boys went to work on the frame sawing off the back section, before the new subframe was fabricated and then re-inforced to provide a sturdy foundation. Knowing the streamlined alloy look they were after the seat base was built and an alloy rear cowl hand-shaped. But needing to write a 148-page thesis and finish the bike in the next two months the internet proved the best place for the other tins. “We sourced a half fairing in Thailand, hand-shaped by OmegaRacer out of aluminium and a Benelli Mojave replica tank also out of aluminium.” 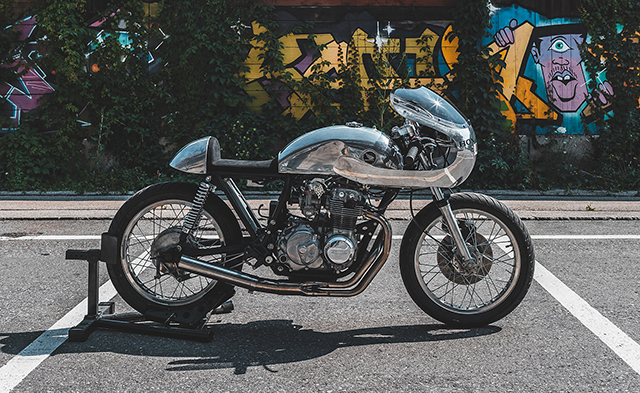 With the Honda set to be used as a hill climb racer and having to start and run on the day of the presentation, the engine build was next on the priority list. The complete overhaul includes a honed block accepting 0.5over pistons. The top end is ported and polished, with KPMI valve springs inside and a bank of Keihin CR26 carburetors on the outside. While the spark side is upgraded thanks to Dynatec coils and Pamco electronic ignition. Finally, a stunning set of Delkevic 4-1 pipes were bolted on and unleash a raucous mechanical symphony. 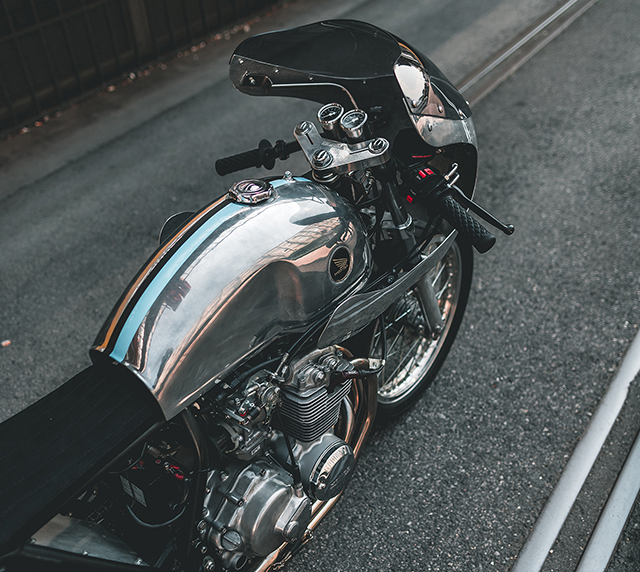 But before the new power plant was bolted in, the braking and handling had to be brought up to scratch for the rigours of racing. The forks were rebuilt with Wirth progressive springs and fitted with a lower aluminum triple tree from TTR400 and a billet top tree. For the period correct look replica Borrani rims were laced up to the hubs with stainless steel spokes, before being wrapped up in Avon Roadmaster rubber. With a special order sent to British shock specialists Hagon resulting in a custom pair of their pieces bolted up to the rear. 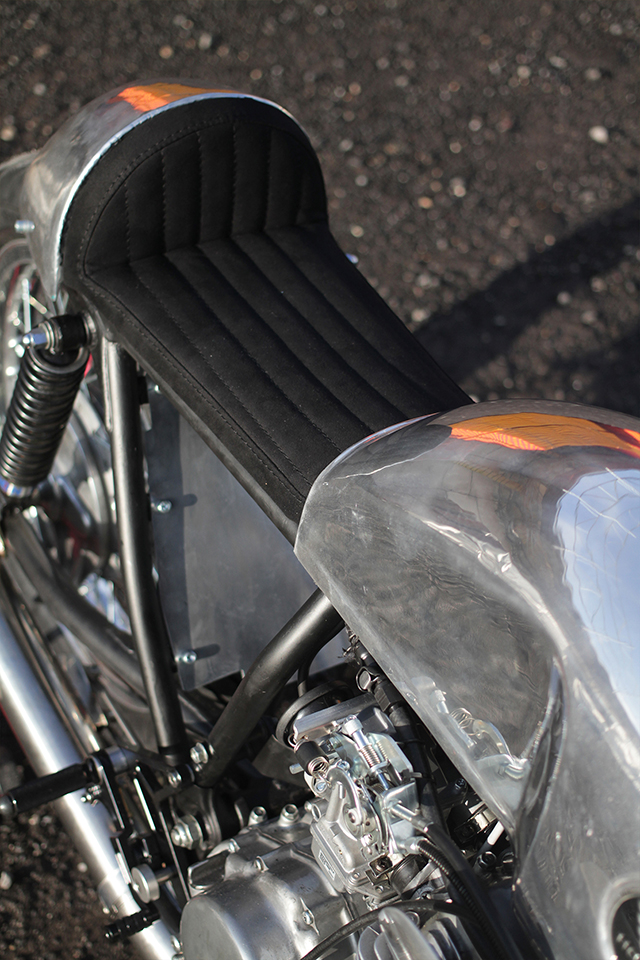 With German architect Mies van der Rohe’s words, ‘Less is More’, ringing in Marc’s ears he and his brother set about crafting a wiring loom from scratch. It had to be clean and unseen with the whole thing using just a single fuse. While a tray was built to hold and house a lithium-ion battery, regulator and starter relocation switch. The kick start was removed and replaced with a TTR400 plug, with the same company also supplying the rearsets. With the other half of the race controls, Fehling clip-ons, wearing a Nissin retro master cylinder and braided brake lines for consistent feel up the mountains. 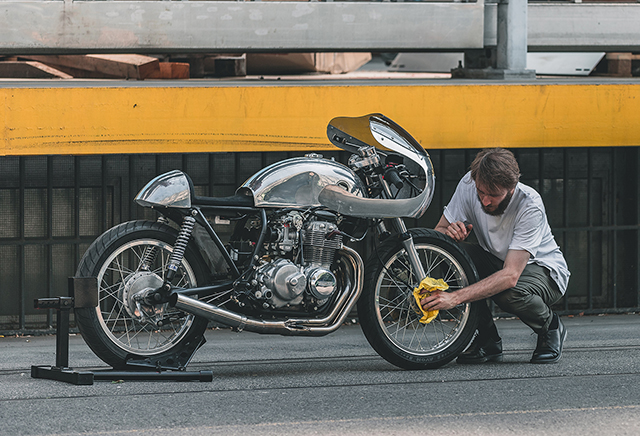 With time running down and Marc furiously writing up and photographing every detail of the build and its inspiration, some quick testing showed the need for a racing clutch and stiffer springs. Finally, the build was completed with minimal graphics and the seat upholstery done in vintage RC181 style using Alcantara by Lugon Garnisseur. With Europe in the middle of summer the Honda has been competing flawlessly in the Swiss Hill Climb Championship and when it’s not racing the renaissance CB400 sits in the 2VMotos shop next to a copy of Marc’s brilliant thesis, which you can read here