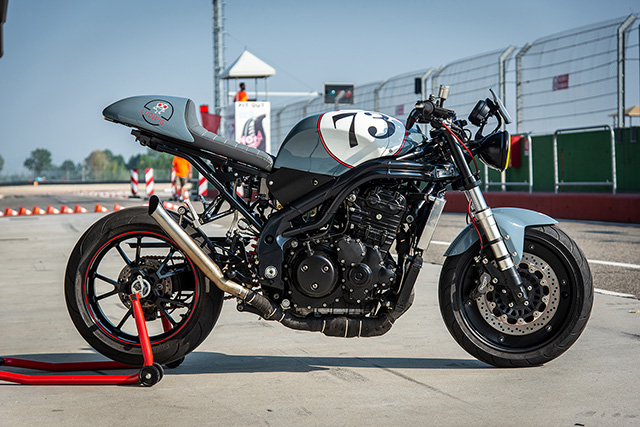 Artists and builders tend to be extremely critical of their own work. With the benefit of hindsight, it can be hard not to go back and ponder all the things you would have done differently were you given a chance to turn back the clock and take a second crack at an earlier completed work. But after Italy’s Ludwig Motorcycles had one of its 2017 builds suffer a crash, the shop was given the opportunity to turn all those would-haves and should-haves into reality. 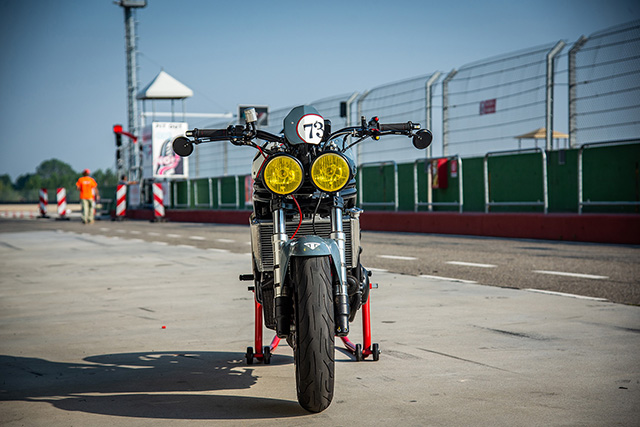 Founded and headed up by Riccardo Casarini, Ludwig is a full-service motorcycle shop in Northern Italy. On top of maintenance and a wide array of customization services, the outfit also offers classes teaching riders to wrench. Having only existed for a few years, Ludwig doesn’t have that many builds to its name, however, what it lacks in quantity it more than makes up for in quality. 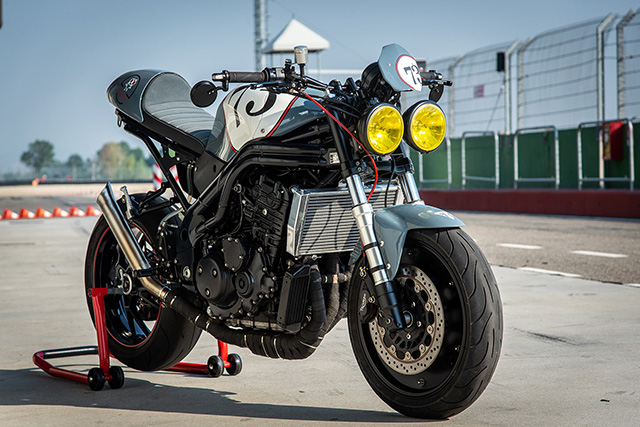 Riccardo hails from Voghera, a small town in Northern Italy in the Oltrepò Pavese region, in Pavia, where he grew up restoring race machinery in his family’s shop. He later graduated from the University of Pavia with a degree in philosophy, writing his thesis entitled the “Estetica della velocità” (or “The Aesthetics Of Speed”). Following college, he moved to Barcelona and got involved in the local custom bike scene, cutting his teeth in the city’s Poblenou district before eventually returning home and setting up his own operation in Voghera. 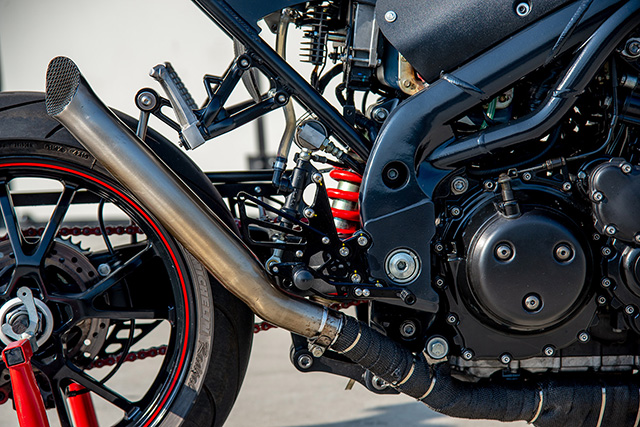 This cafe’d triple began life as a tired 2004 Triumph Speed Triple and eventually, the bike found its way onto Riccardo’s bench for customization. Ludwig installed a subframe off a 2008 Speed Triple and the tank off a 1998 example along with an off-the-shelf cafe seat, some aftermarket and custom bits, before finally covering the thing in a shade of royal blue inspired by 1967 Ferrari GT 265. 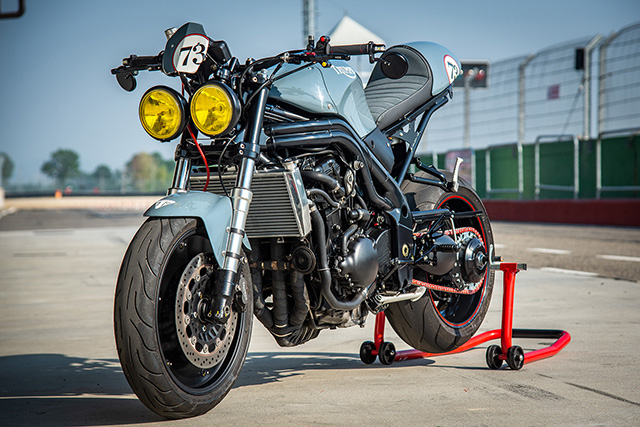 The customer went home with their new bike and all was well until a driver, who more focused on their phone than the road, plowed into said customer and the one-off Triumph. After the claims were filed and bones had time to heal, the bruised up custom was returned to Ludwig for repairs. “The owner of this bike considered this event as a possibility to take another radical step, this time with a neo-cafe racer theme with details inspired by endurance racers,” explains Riccardo. 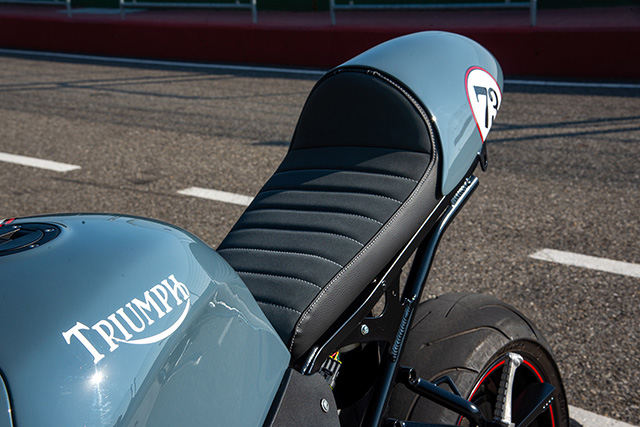 After drawing up a few new ideas, the bike was stripped down to the frame and the chassis, subframe, and swing-arm were sand-blasted and powder-coated in black. To further the “neo” aspect of the theme, Riccardo ditched the back tri-arm wheel for a modern five-arm Marchesini rim off a 2017 Speed Triple. In order to graft the late-model rim, the Ludwig gang had to fashion a custom spacer and axle, which he tells us was probably the hardest part of the build. 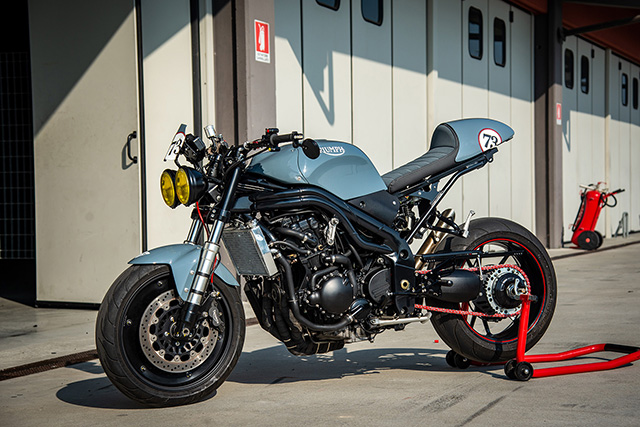 In order to put the flashy single-sided five-arm wheel on full display, the rear hugger was pulled. To avoid the road’s dirt and grime from getting kicked up under the seat, an interesting internal rear mudguard was fabricated, following the contours of the subframe before jetting downward to provide ample coverage for nearby components. 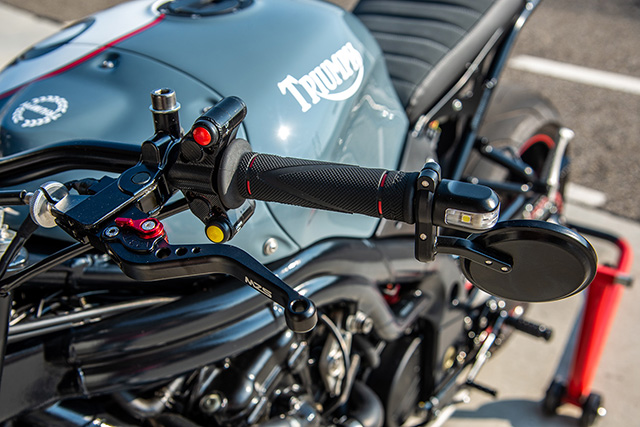 The bulk of the wiring was cleaned up and rerouted, while the battery was relocated from the subframe to a new custom bracket beneath the ’98 fuel-cell. The tank cover’s been modified and is now removable, allowing for easy access to the battery. Filling in the sections between the tank and frame are a pair of one-off side panels that can also be unfastened to get to the fuses and OBD plug. 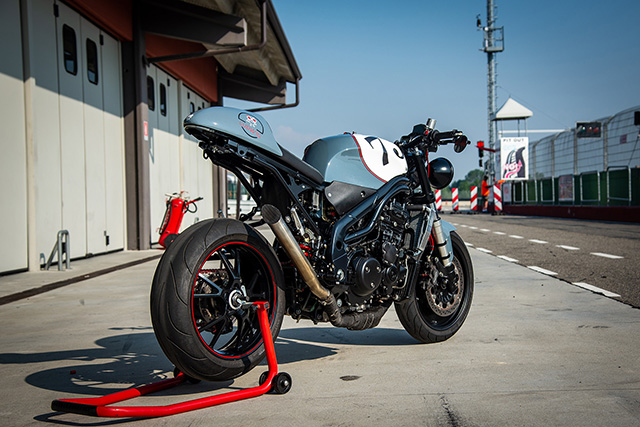 The stock bug-eye headlights now have matte black shells and endurance-style yellow lenses, and a custom aluminum number-plate sits above the lighting, adding some character, and shrouding the factory instrumentation. And aside from the instrumentation, nothing of the original cockpit remains. A set of higher black LSL bars are fitted with new grips, adjustable levers, bar-end mirrors, bar-end LED signals, a Rizoma reservoir, and a Discacciati front brake radial master cylinder with aeronautical Goodridge lines and new Brembo pads fore and aft. 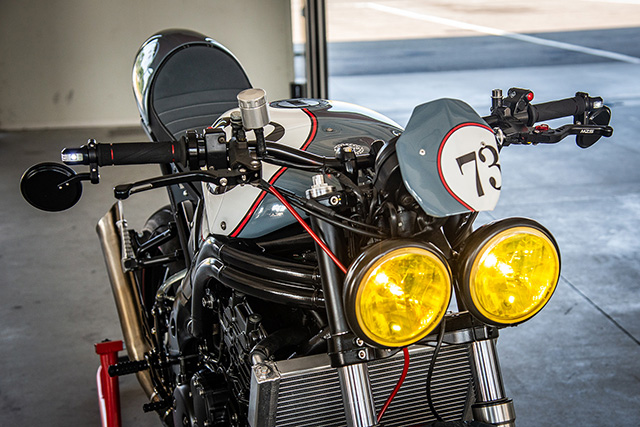 The Speed Triple also gets top-shelf GP-style colored switchgear, and Riccardo has even set up a new function where different ECU maps can be selected on the fly at the touch of a button on the handlebar. Just as trick is the new backlit starter button mounted to the handlebar between the risers. 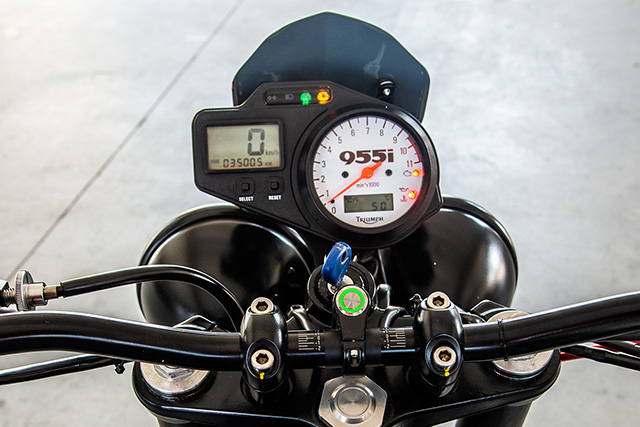 Resting atop the 2008 model’s subframe is a suede saddle fixed to a handmade steel support. An aluminum rear cowl gives the build a racier look than its first iteration, though it can quickly be taken off for two-up riding. The rear lighting is comprised of an LED strip sunken into the seat-hoop, and with integrated signals, there are no indicators protruding from the bike front or back. 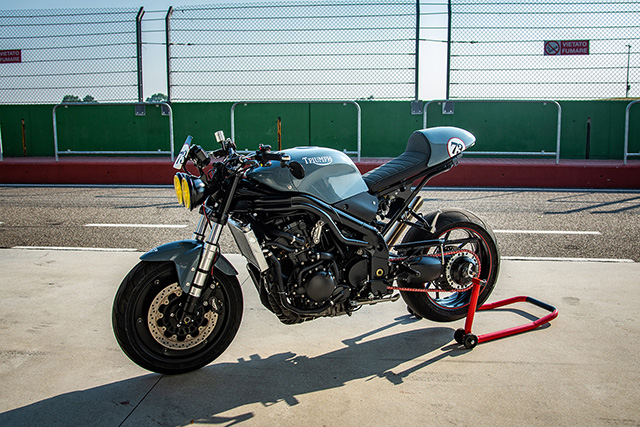 The 955cc triple breathes more freely thanks to an airbox delete and the addition of a trio of cone filters. The stock exhaust has also been replaced with a long inox steel pipe with a dB killer, brushed finish, and a honeycomb mesh cover, blending modern style and vintage race aesthetics. An aftermarket aluminum radiator was also introduced on the bike. 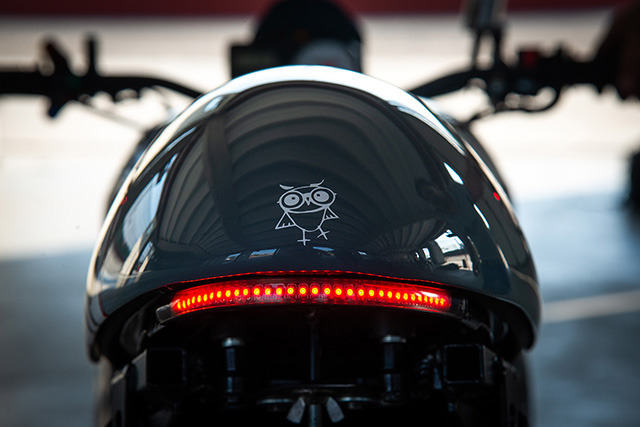 Replacing the Triumph’s scuffed up paint is an almost pastel light blue. The front number plate, tail cover, and one side of the tank feature race numbers, while the other side of the tank sports Triumph’s logo circa 1930. The shop’s owl logo also decorates various parts of the build’s bodywork, while a contemporary Triumph logo is plastered on the front fender. 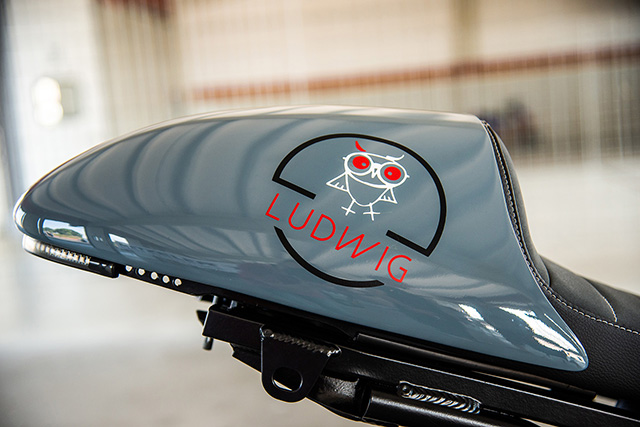 A 0.5mm aluminum front-wheel insert was constructed along with a custom spacer and hardware. It weighs less than a pound and is said to be perfectly balanced. Other finishing touches include adjustable billet aluminum rear-sets, Michelin Pilot rubber, and a red RK O-ring chain and custom drilled aluminum chain-cover. The Triumph’s stock 43mm USD forks and mono-shock were also overhauled for the project. 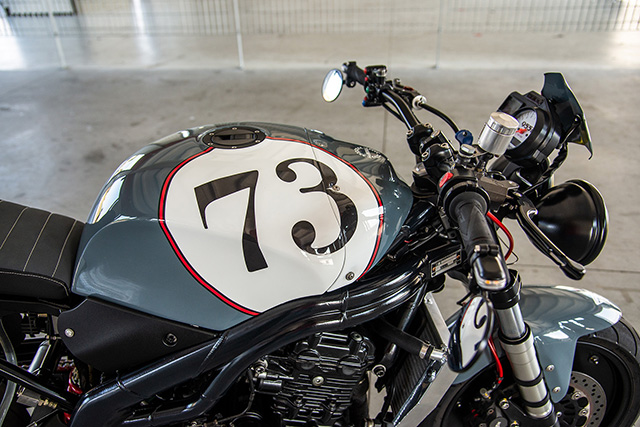 Riccardo and his team have managed to pull off a surprisingly transformative build by simply making a few crucial tweaks and changes. While it’s still a cafe’d ’04 Speed Triple, the overall look is markedly sleeker, and the subtle nods to endurance racers beautifully tie the whole package together.  Not that they did anything wrong on the first version of the build, but they definitely got it oh-so-right this second time around. 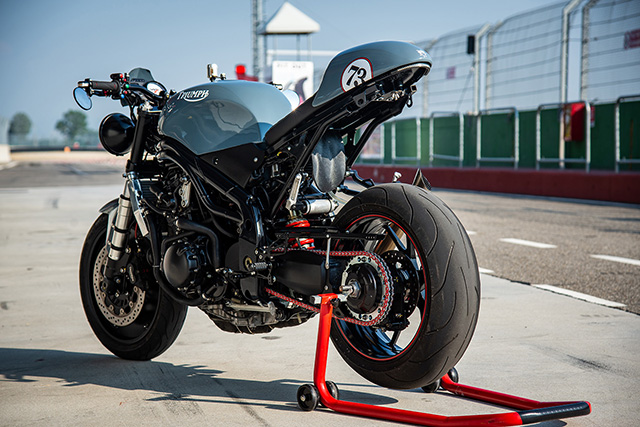