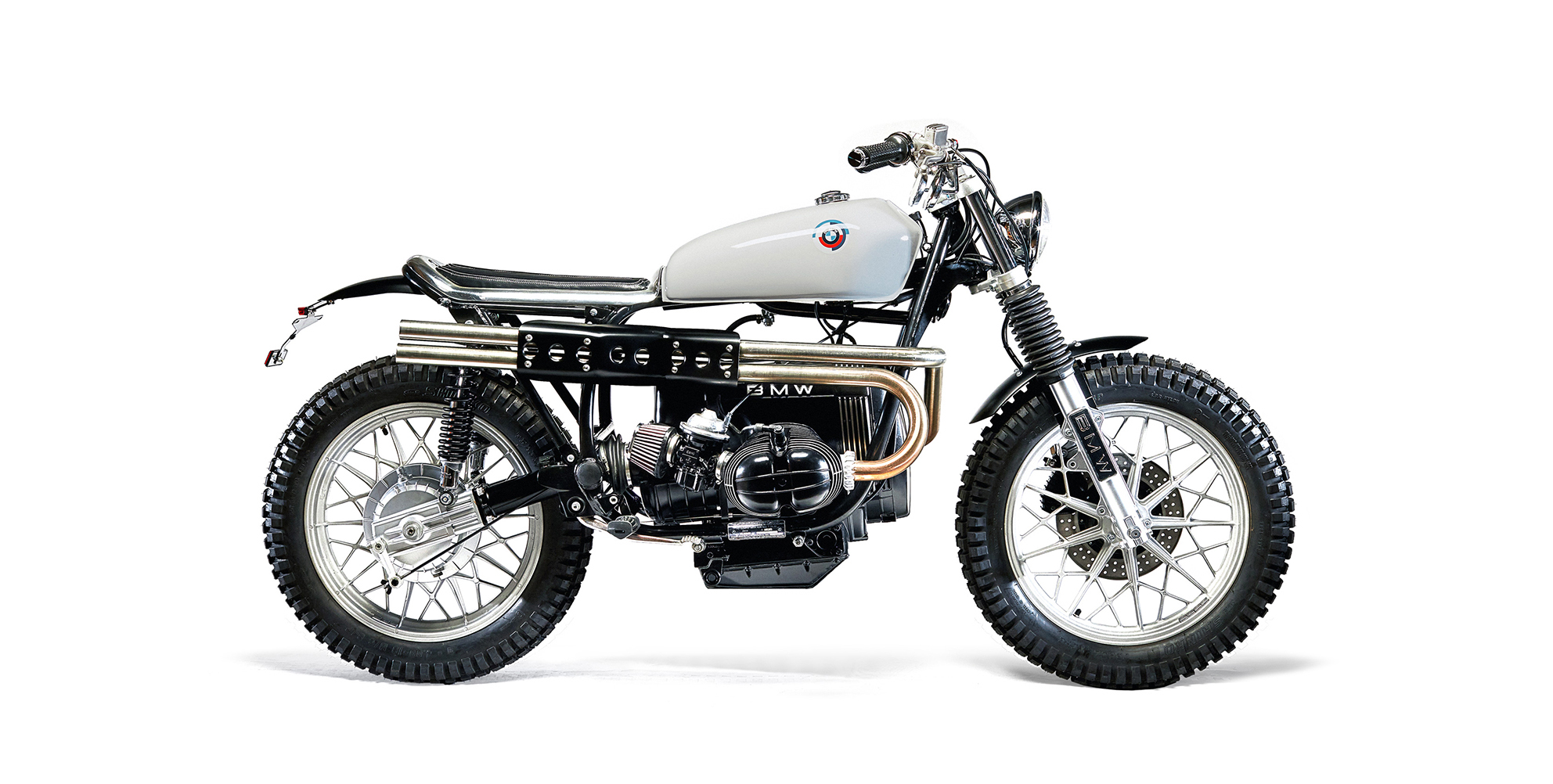 There are obviously advantages to buying an already-built custom motorcycle. But sometimes it doesn’t go to plan – especially when older bikes are concerned. Douglas had been toying with the idea of building a custom bike but, being time poor, decided to commission one or buy one. (He ended up doing both.) “I have wanted to do a bike project for a few years now,” recalls Douglas. “I started riding motorcycles at 16 in South Africa and loved the simplicity of the airhead engines. They were different from a mechanical perspective and looked great, so I believe I had the idea seeded in my thoughts from a young age that one day, if I could afford it, I would love one.” Now older with some cash ready to burn, he was on the hunt for the perfect BMW donor to get the project started.

It wasn’t long before he discovered a 1984 BMW R65 that looked great, right here on Pipeburn. When he noticed the bike was for sale, he quickly put plans in motion to buy it. Due to the bike being in another state he decided to arrange a qualified mechanic to check the bike for him, but unfortunately they didn’t uncover some of the issues. “The previous owner had spent time on a rather nice base design, so the ‘bones’ of the bike’s design were good. Sadly, not the mechanical ‘bones’.”

With the bike purchased and on its way, Douglas now had to find the right motorcycle shop to take his design ideas and make them a reality. “I did some research via the internet and word of mouth, and this narrowed the field down to a few options. It was simple after that – the first face-to-face discussion closed it for me. Although most bike shops can build a decent motorcycle, I was looking for a business to partner with on the project. In my first meeting with Ellaspede they showed their integrity. I am time poor, so I needed to know I was able to trust them to keep me informed, and they would get on with the project aligned to the brief.”

When the bike arrived at Ellaspede, the initial plan was to get it roadworthy for Queensland rego and to make a few small aesthetic changes to complete Douglas’ plan for the bike. But sometimes with old bikes, ‘the more you look, the more you find’, and the extent of the extra work required became more evident the further they delved into the bike.

After some test riding and a partial tear down it was evident that the heads, gearbox, driveshaft and diff were all in need of a rebuild. Having the engine out also meant it was the perfect opportunity to apply some paint and polish to achieve the ‘black motor, linished fins’ look. Both carbs also copped a refresh, now sucking cleanly through K&N filters.

Like many airhead BMW’s of this era, the stock subframe (already modified here) are a little under built and this one was skewed from years of use, so it was removed in favour of a custom chromoly unit that Ellaspede fabricated in house. A freshly powder coated subframe wouldn’t look right next to an ‘original finish’ mainframe, so both items were sent for a factory look black satin powder coat before the reassembly began.

Once the subframe was complete it was onto the suspension to get the bike sitting and riding right. The rear shocks were replaced with longer Ikon 7610 items to level it out, sharpen up the front rake and provide some extra clearance for off road activities. The front forks required a total rebuild and received new springs, dampening components, seals, oil and repainted lowers to bring them back to their prime.

Douglas loved what the previous owner had done with the tank so that remained as a key piece of the build. Mating up to this now is the custom designed and fully CNC machined seat base plate with padded inlays, buried tail light and recessed BMW badge.

“The previous owner painted the fuel tank and it was one of the items which attracted me to the bike so I retained this. The seat design was an idea I had for a while. The two kidney shapes as seen on the BMW car grill. The simplicity of white, black and silver, I must admit was steered by the Ellaspede team – they have an eye for beauty in simplicity.”

The stunning 2-into-2 exhaust was also another key piece of the bike that Douglas liked. It looked the part but was a little warm on the leg for daily duties, so Ellaspede replicated and extended the custom heat shield to prevent any hot encounters on the commute.

The custom fabrication continued for the new rear guard, while the front guard was just trimmed down and remounted. Tank mounts were adjusted to get it fitting securely and new indicator mounts were fabbed up front and rear. A new mounting system was made to hide the battery under the Ellaspede CNC machined rear engine cover, which also included a custom coil mount to make it all fit.

Douglas knew that the previous owner hadn’t yet finished all of the wiring so it was inspected and the majority of it replaced with a custom Ellaspede aircraft grade loom and some new electrical components. New Motogadget M-blaze disc indicators in the bar ends and Motogadget M-pin indicators at the rear are now hooked up. A pair of Koso Hawkeye taillights were chosen for the dual tail light setup, one buried into the back of the seat with a clear CNC cover while the other keeps things legal on the tail tidy.

Being an all-in-one unit, the rear drum brake was rebuilt as part of the diff rebuild. At the front a new disc was required and the caliper was rebuilt, repainted and received new pads to match. Other new bearings and seals also made their way into the bike throughout as required.

Most of the other small items on the bike were either powder coated or vapour blasted to ensure a fresh finish extended all the way across the bike. With it all screwed back together now it’s time for Douglas to ride and enjoy. As with any old bike there’s always a few issues to resolve when building a custom bike and now this R65 can motor on trouble free for years to come. When Douglas was asked what his favourite part about the bike is, he simply said “Riding it!”