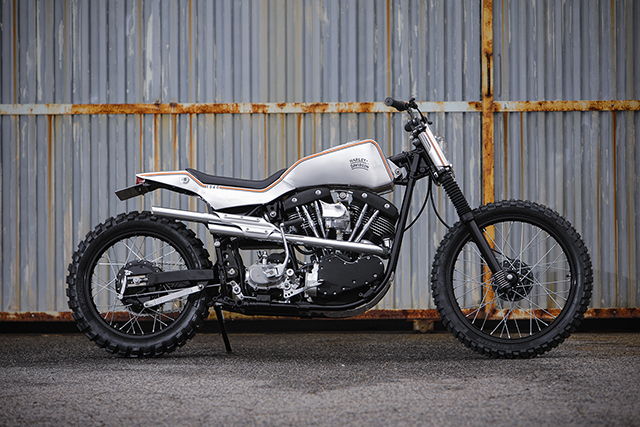 In a world filled with celebrities with no discernible talent and the scourge that is the social media influencer, there comes our favourite antidote. The incredible craftspeople and visionaries that from their humble locales ply their trade without ever seeking fame or fortune. It is in the back streets of any Japanese city that you’ll find many of these fine folk working their magic. And from the beautiful temple filled port city of Onomichi we meet another master, Yusaku Sato. Who presents to us his latest build, a stunning Shovelhead Scrambler from his house of handmade machines, Sato Marine Cycle. 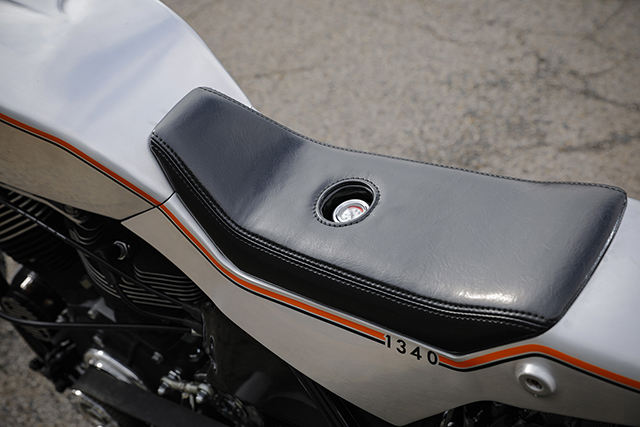 The Harley-Davidson has a long history in Japan dating back to the 1920s, when they were built under license by Rikuo, primarily for the military and the police. Thousands of Flatheads were made but the cost of the licensing, political tensions and the threat they posed to the many small manufacturers around the country meant the agreement collapsed. But the love of the big V-Twin had become enshrined and to this day Showa who bought out Rikuo still supplies HD. 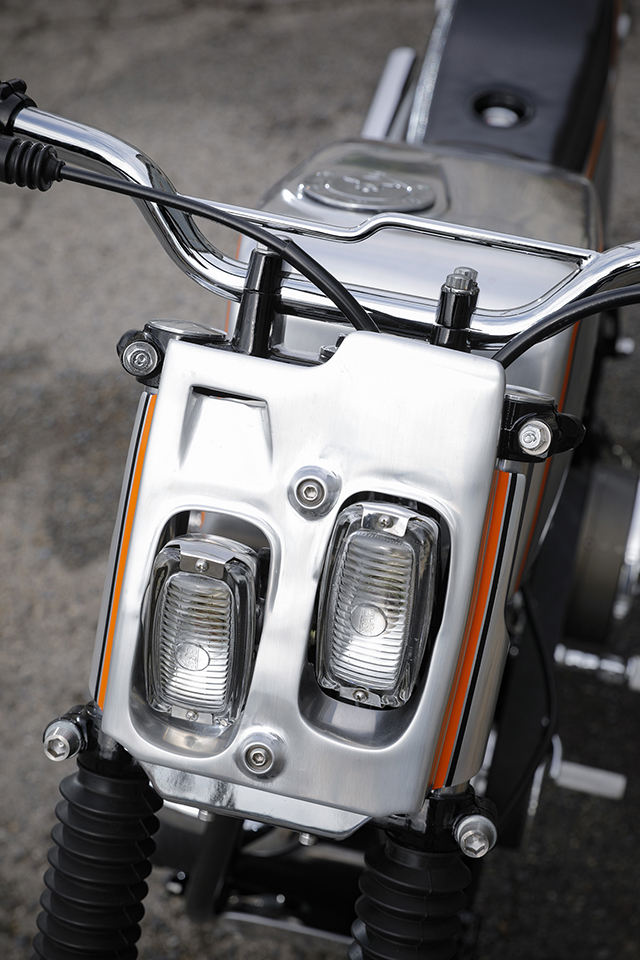 For Sato-san the Shovelhead is a particular favourite and makes up roughly 50% of the builds he puts together. Having been a Yamaha dealer for the past 30 years the other bikes you’ll see in the packed shop tend to be XS650s and other Yamaha twins. While his bread and butter is building some of the most stylish bobbers you are ever likely to see, the chance to mix things up and create a scrambler was too enticing to pass up. 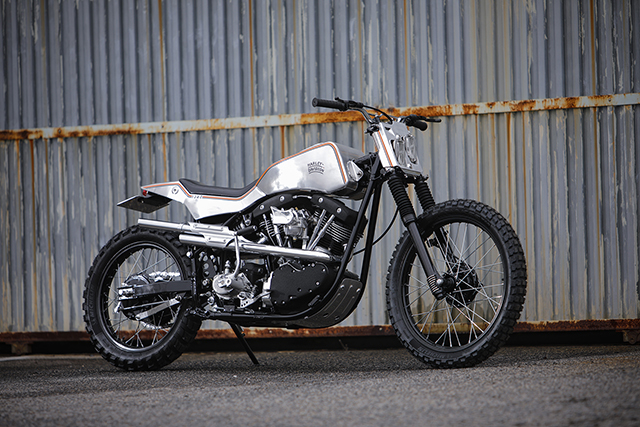 The build starts with a 1968 frame and motor with just about everything else taken from the parts store in the shop or hand fabricated. The bare frame was put up on the lift and smoothed out before the grinder was fired up and the backbone cut. Although now completely hidden from view the stretch is a subtle but telling 2 inchs, maintaining the original angle of ascent from the centre post to help improve the ride height. 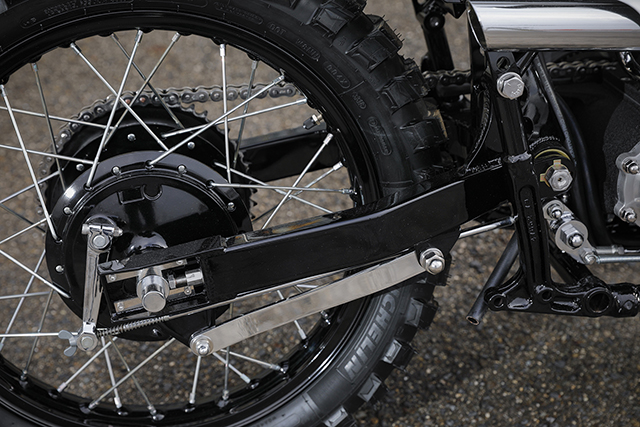 Although he hardtails many of his builds, Sato-san had bigger plans in mind for the scrambler and pulled out some Yamaha parts from storage. Fabing the mounts and brackets up he’s created a single shock conversion that is neatly hidden inside the architecture of the frame. While the custom swingarm not only helps reduce weight but also provides the extra width needed to house a tyre of the size and tread depth he had planned. 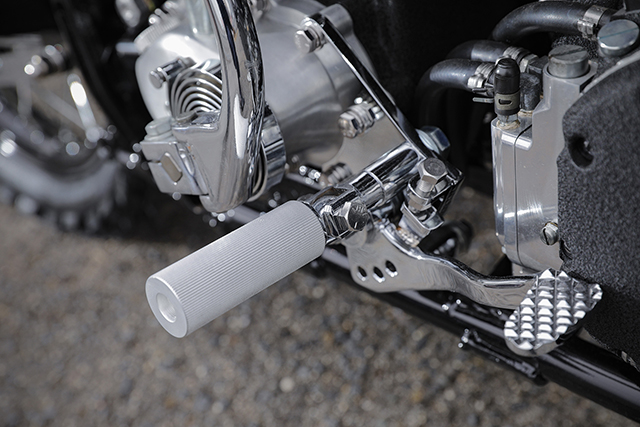 The front end also comes from the Yamaha parts bin with the forks suspended by a set of triple trees that uses a custom steering stem and bearings to fit the old school shovel frame. For a vintage feel both ends feature drum brakes, again taken from the 30-year-old collection of Yamaha parts and while not providing the stopping power of modern discs, they keep everything looking period correct. The hubs are laced up to new rims in 21in front and 18in rear before being wrapped up in the best of Michelin’s offroad rubber. 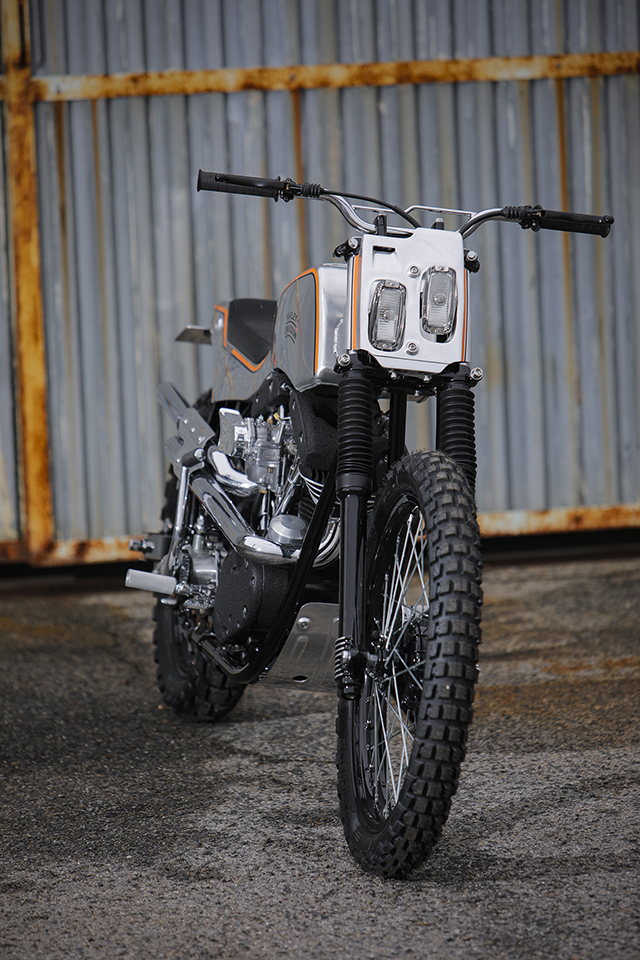 Then it was time for Sato-san to show off his immense fabricating skills in another area, by taking large sheets of aluminium and crafting the entire bodywork by hand. Designed to give the monocoque look, the body is two distinct sections, the first of which is the squared up fuel tank that features a rolled front and grafted in racer filler cap. The tail piece matches the lines to perfection, with the stripped-down look taking styling cues from flat track racing, while the black leather seat provides the class and comfort. 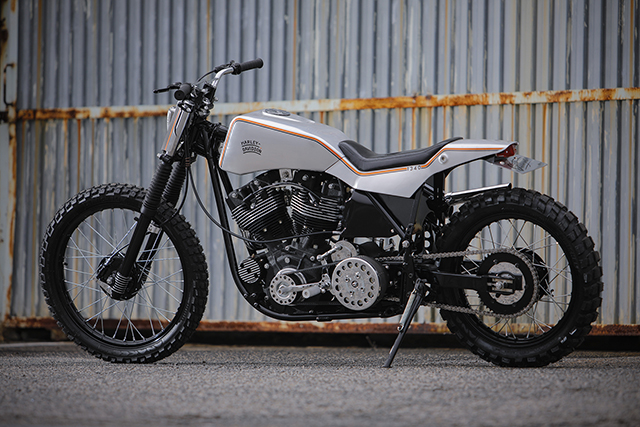 Of course, any V-Twin build has a standout feature and the three man crew at the shop have ensured the Shovel looks as good as it runs! Inside the capacity has been taken out to later model specs to bring it up to 1340cc. With the internals provided by American company S&S who also supply the heads for a bullet proof short block. The auxiliaries are just as nice, the old school Keihin carb has a hand fabricated filter shroud. While the baffled straight through custom pipes, with a hand-rolled heat shield, ensure you hear this scoot coming from a mile away. 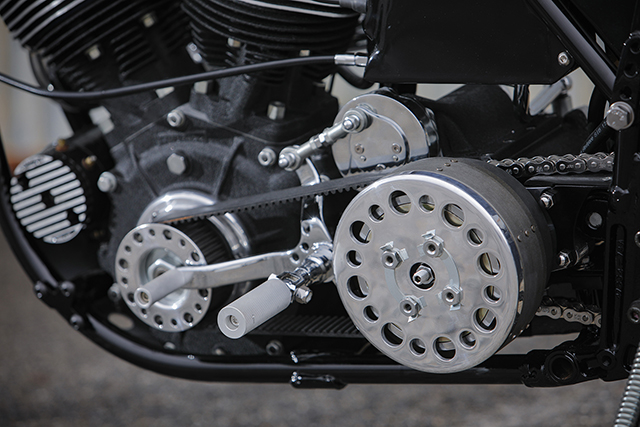 To give the engine the right look there is a mix of polished parts and crinkle black paint that extends onto the 4-speed gearbox that has been equipped with a Pro Clutch assembly. Accessories like on all of Sato-sans builds are kept to the bare minimum. With a bash plate and front number board fabricated from alloy, the second of which plays host to a pair of period style headlights that are offset mount. TK paint took care of the graphics and then all that was left was for a heavy boot to stomp on the kick to complete another Sato Marine Cycle custom that’s all class without the fanfare. 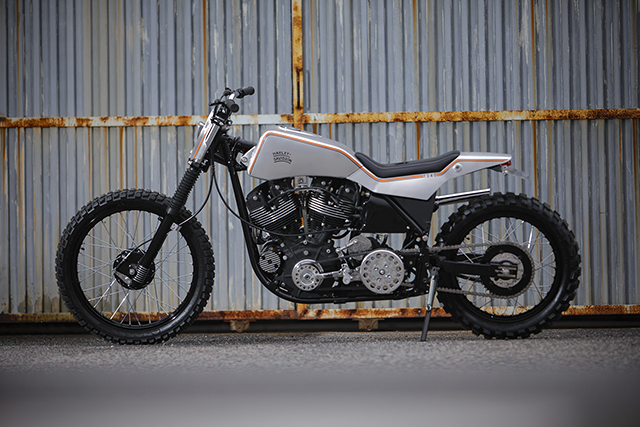