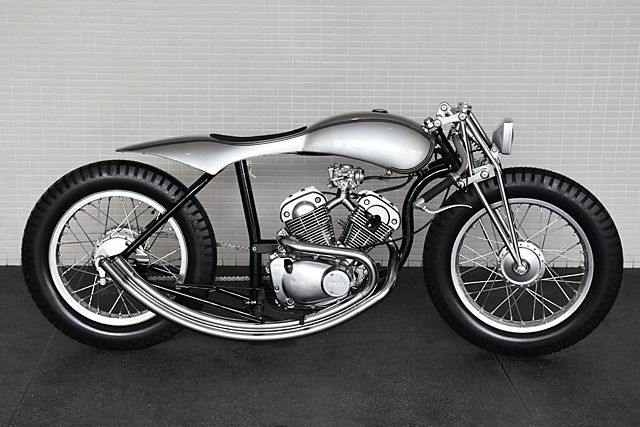 The very nature of custom bike building is that convention gets thrown out the window; convention is what everyone else does, what the manufacturers make, what normal people like and what the average rider owns. The custom world is about going where nobody has gone before and with his latest build Dennis Karlsson of Half Caste Creations in Bangkok has done exactly that – only he jumped light years ahead in the process. I can’t give you a make or model, this is a one off custom motorcycle creation that simply drew on a little of the board trackers of the 1930’s for inspiration, but is truly a 21st century piece of functional art work with one hell of a story to tell. It all starts two years ago when one of the true renaissance men of the world, Thomas Erber, was visiting Bangkok to piece together his Le Cabinet de Curiosities that would take place in the city in 2014. The idea is a modern interpretation of the 16th century phenomena of cabinets of curiosity where the European elite would display their many exotic and curious objects they had gathered from around the world. Nobility would be invited to stately homes to view the animal heads from Africa, trinkets from China, Middle Eastern artefacts and just about anything that appeared to be other worldly. In the 21st century French Journalist Erber has brought back the tradition, only tired of the convention and conformity in modern design, he’s created a platform for those in fashion, jewellery, furniture and other ventures to showcase their creative genius to the world and it was on this trip to Bangkok he found a Half Caste Creation in a magazine and wanted a motorcycle to be part of the show. So Karlsson and the Half Caste crew built a Yamaha SR400 with alligator skin and hand formed features that wowed the crowds. So pleased was Erber with the introduction of a custom motorcycle to his travelling show he commissioned Karlsson to build another bike for the Paris show and this time the Half Caste Creations crew knew that nothing short of outrageous perfection would fit the bill when presented with such an honour. The bike would not just be squirreled off in a corner but be on display in the window of the iconic Colette Paris – so no pressure then lads. For Karlsson there was also a feeling of unfinished business “I felt that there was a potential that I had yet not reached or quite frankly not yet attempted and I wanted this feeling to go away”. Only an engine was purchased, the rest would be built by hand and take the shape of the bicycle like board trackers that have you hunched over, back aching and a face full of wind as you build more and more speed around the oval. The engine was the beginning of the process, a 248cc V-Twin from a Yamaha SRV that provides the slimline, vintage styling of an air cooled twin and the reliability of a modern engine that would create the visual centre piece of the build. The motor is not just what powers the machine but also plays an integral structural role in the frame of the bike as Karlsson chose to mount the V-Twin in a way that provides a floating effect while also acting as the lower frame rails. The rest of the frame consists of a single backbone as straight as an old mountain bike, while the hard tail rear-end sets the geometry for a flat stretched look. The pièce de résistance is the exquisitely formed downtube that curves its way around the tyre from the headstock to a mount at the front of the engine providing a truly artistic touch to what is an extremely functional piece of engineering. With the engine mounts fabricated and the motor having been triple checked for fitment the frame was given a coat of black so as to further enhance the floating effect of the engine with it’s contrasting silver colour. A hard-tail rear end leaves a lot of options on the table when it comes to the front suspension as a builder could use function to compensate or form for even more dramatic looks. Luckily for us all Half Caste Creations combined the two and built their own girder front end that not only fits the board tracker styling but is arguably the best setup when working in tandem with a hard tail, the lack of dive creating a constant stability other forks are incapable of. For Karlsson this was his first time working with a girder design, let alone building one and is the first to admit the priority was “the pursuit of ultimate aesthetic beauty”. But you don’t build bikes this good unless you have more than a little talent and the first ride proved his own design not only looks amazing but handles just as well. Every piece from the linkages, to the spring and the finishing welds are modern perfection with a ’30s feel and no doubt HCC will be flooded with orders. With a rolling chassis now on the bench the attention turned to one of Karlsson specialities, hand formed metal bodywork. The initial idea was to create a Hazan style wooden seat but wanting to hide all the wiring and maintain the ultimate in clean looks the decision was made to stick with metal. The board tracker influence may be there, but these are modern flowing lines, that take on an alien like formation as the tins arch from front to back in a single solid piece.

The rear end following the lines of the tire for a faux guard feel while the tank gently rolls forward creating a beautiful symmetry with the forward cylinder of the engine and that incredible downtube. The paint work is subtle to let the fabrication take pride of place and yet classic in 1930’s Mercedes blonde grey with some subtle black pin stripping to express the the unity of the seat cowling and tank. The bars and levers are another nod to the board tracker era but mounted in a way so as not to disturb the lines of the metal work. The headlight provides a single square element to this otherwise curvaceous build and all the wiring and associated components are hidden in the seat, a cleaner design you’re never likely to see on such a modern engine. The wheels are 18 inch rims front and rear, laced to polished hubs and with their aggressive antique styled rubber provide some menace to and otherwise sweeping build of soft lines. But Karlsson wanted a little more agro to his one off creation and while the exhaust pipes may visually be a thing of beauty their bark is enough to wake a neighbourhood and frighten the toughest of men! The end result is a bike named Silver Aero, built in just three months and that is currently on a plane to Paris where the city of love will certainly fall head over heels for a revolutionary machine so good the fashion capital of the world gave it a personal invitation.