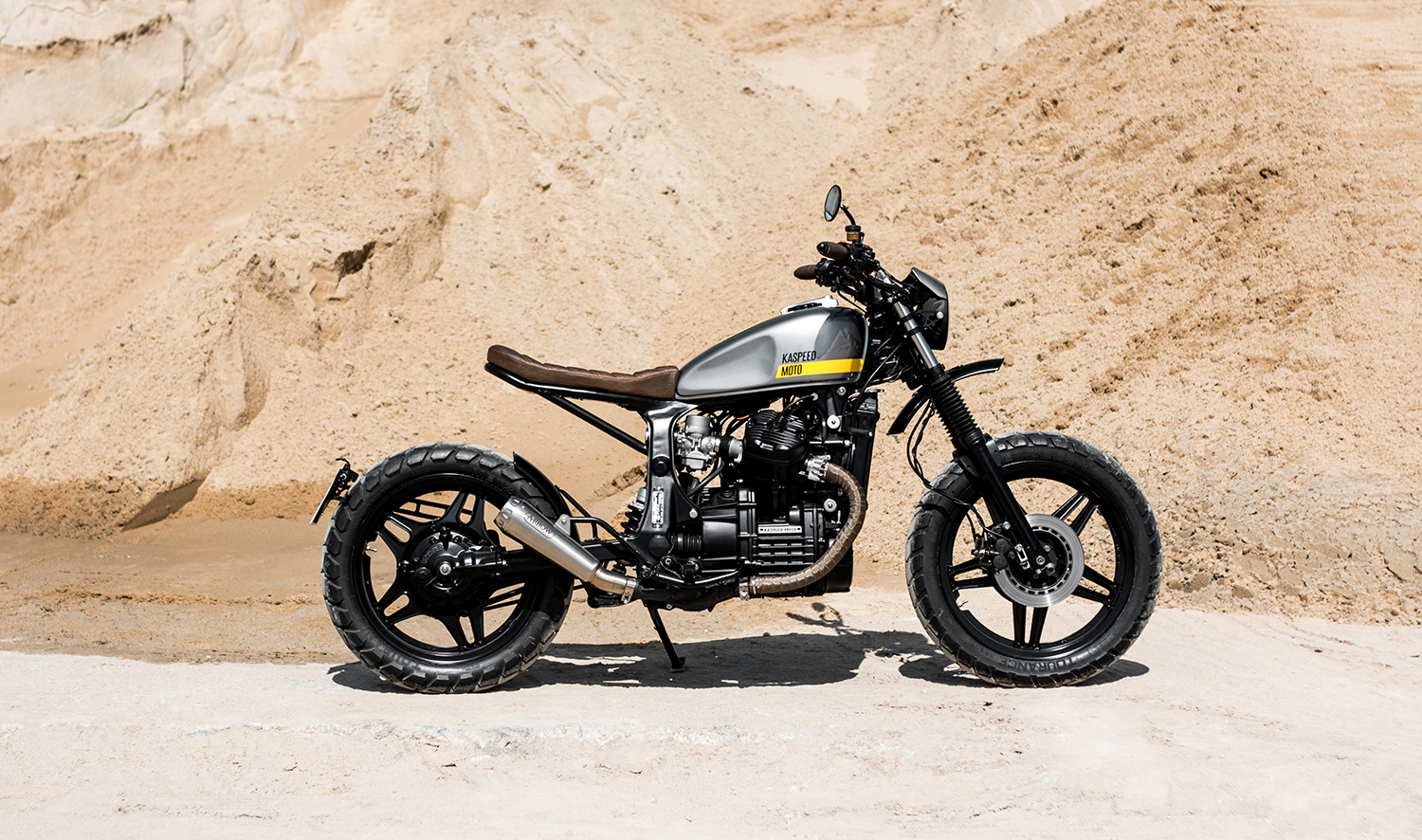 Success in any endeavor can breed complacency and from here even the mighty can fall at a rapid rate. But such is the commitment to excellence at Germany’s Kaspeed Custom Motorcycles they’re always investing in new ideas and doing the R&D to make sure their clients get only the best. So hot on the heels of their limited-run production bikes they’ve turned their attention to scramblers for the first time. Not willing to let a customer play guinea pig, this hotted-up Honda GL500 is their test bed for machines with an off-road bent and boy is the future bright for those who like to play in the dirt.

Despite being one of the early donor bikes to get the cafe racer treatment in this period of the revival, the CX/GL500 is perhaps a better dual sport bike than it is an A-Road rocket. A torquey yet reliable twin cylinder engine, strong frame and shaft drive, along with overall solid engineering, it has a few things in common with early BMW GS’s, that are the gold standard of living in two worlds. In fact, they’re two of the few bikes you’ll regularly see with more than 100k on the clock and still running well.

So for Kaspeed the bike made perfect sense and having recently done a CX, the 1982 GL Silverwing gave them a chance to play with the pro-link rear end. “The base bike was in pretty bad condition, so we really saved it from going to the junkyard,” Jimmy told us. Who is one-third of the family affair, that combined have more experience and qualifications in the motorcycle game than just about anyone! “For the design, we were inspired by a mix of urban and off-road influences. We wanted the urban character of agile SUVs like the Volvo XC60. But also the flexibility for country and dirt roads.”

So to help that agility and shed some pounds the weighty rear subframe was cut off all the way back to the centreposts. From here a new unit was fabricated, which is both shorter and up kicked to create more space above the tyre. While they were in a fabricating mood, the swingarm is treated to a custom hugger that is brilliantly attached, in a style sure to be copied, and a high mount front fender to match. While a trick number plate holder is added, made from the same round bar and wraps around the back of the rear tyre.

That rubber is the enduro/street spec Metzeler Tourance, but those who know their Honda’s will recognise that the boys have swapped the GL 16in rear rim for a CX500 18in unit that is much more befitting of the style they were after. To change the suspension from soft tourer to dual sport bad boy, the team worked with Wilbers to create the perfect custom setup. After all the data was run and measurements taken, Wilbers put together a Blackline mono shock for the rear and all new internals for the front forks. While a set of LSL bars give the sort of leverage you need when tackling the back roads.

To transform the look, things start at the front with a KOSO Thunderbolt LED headlight with custom fairing. “That fairing is 3D printed and will be available in our upcoming online shop very soon!” Jimmy Smiles. The tank has been changed to a CX500C unit, with custom knee dents before it was painted up in metallic grey and bright yellow that’s also been applied to the Shoei Ex-Zero helmet that goes with the build. The hand-dyed leather seat is pieced together by Marcus at Fahrzeug-Sattlerei-Seidel who also made the matching grips.

The engine needed a serious overhaul and cracking it open to perform the mandatory triple bypass the lads had been beaten to it. Problem is, the last person to open the motor had replaced the water pump’s mechanical seal with what appeared to be a whole tube of bathroom silicone. With the inside sorted, the engine was painted black and given some custom Kaspeed badges, while the refurbed carbs get a set of DNA filters. The exhaust is a clever mix of original and custom, wrapped, and the centre box modified to accept a single Arrow Pro Race muffler.

The wiring is all new with a tiny battery hidden in the tank tunnel and NOS CB750 switchgear up on the bars. These are joined by the very best hand controls from Magura and all the information you need is right in front of you on the Koso DB-EX 02 digital dash. Like all Kaspeed bikes, this custom is completely street legal with additional lighting from Kellerman and so that the rider matches the bike there is custom clothing from John Doe to go with the Shoei helmet and Ariete googles. Now that they’ve thrashed their sweet GL scrambler on and off-road, they’re ready to take orders and having partnered with Alpha Technik and so many big brands, the end result has the quality to match the scintillating scrambler style!