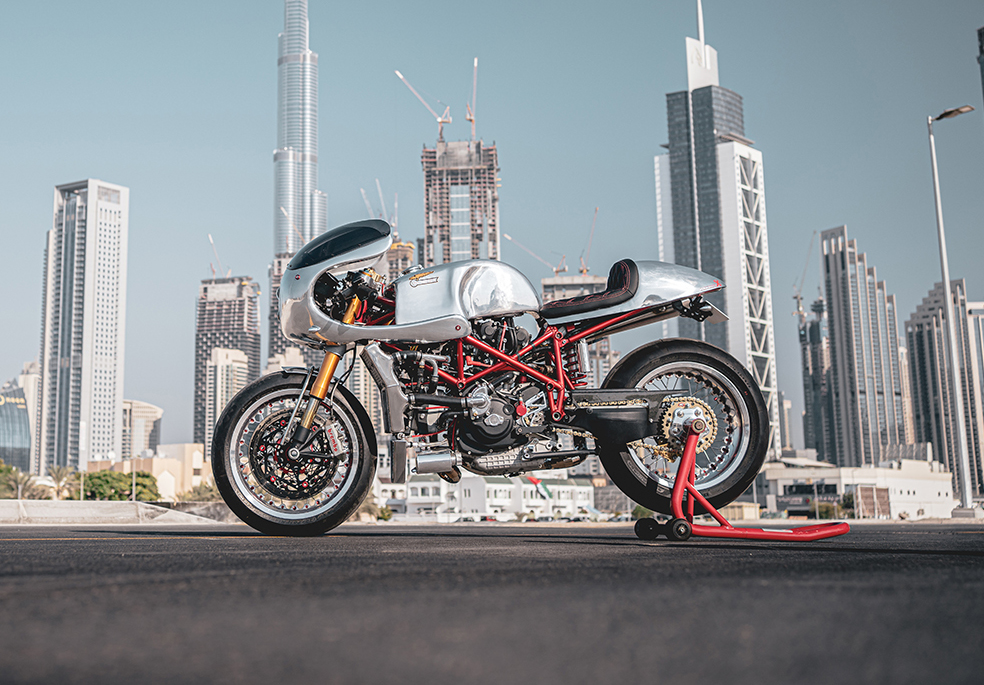 The Isle of Man TT and the Dakar rally are arguably the two toughest tests in all of motorcycling, pushing man and machine to the very limit, and sadly claiming lives along the way. But it’s in these two races, among many others, where Vendetta Racing UAE plies their trade and gives them a reputation for building bulletproof bikes to hunt for the win. Racing, however, can be a restrictive practice with rulebooks thicker than your arm. So, in their limited downtime, Alan Boyter and the team let their creative spirit run wild under the VR Customs banner. ‘Project X’ is their latest creation, a stunning Ducati cafe racer that was six years in the making, but more than worth the wait.

After Alan had finished a custom makeover of a Triumph Speed Triple in 2014, he turned his attention to the restoration of his 1997 Ducati 916SPS, “and it was agreed that it would be a great and very unlikely base for a track-focused café project, after a brief search online, it was found that 916/996 café projects are pretty rare. In true VR fashion, not one for following trends or taking the easy route, the decision was made there and then,” the team tell us. Wanting to have an old school look on the relatively modern machine, Alan was emphatic that all alloy bodywork was the way to go. But flying the flag for the UAE in racing at home and abroad doesn’t leave the considerable time needed to hone one’s skills shaping raw alloy.

A company in the UK was found who could do the work and had some off the shelf parts they could modify to do the job, but the tank would have to be a one-off! “With the 916SPS in bits, an old tank was modified with expanding foam and body filler to form a mould for a newly designed tank to be made from alloy. Once that was shipped off to the UK, it was time to source everything else…including a bike!” Alan laughs. With the 996 based on the earlier 916, a clean example of the big block version was purchased online from overseas, along with a host of cool parts and all packed into a container and sent to the team in Dubai.

But with delays on the bodywork and endless racing commitments, things stalled on the Ducati. “There have been various growth spurts here and there since 2015, but the bulk of the work really took place in the second half of 2019 and again in the last four months,” Alan explains. Starting with the frame, the rear section was removed and an all-new subframe was fabricated to best suit the cafe styled seat. The same was required at the front end, with the full suite of plastic fairings gone a new front subframe was perfectly fab’d up. With the paint inspiration coming from the ’50s Ducati Elite, the chassis was given a stunning coat of candy apple red.

Over the top goes the full array of custom alloy bodywork, it might have taken a while to arrive but all can agree the results are simply stunning! Polished to perfection, the lines flow brilliantly from the over and under headlight equipped front fairing with a smoked-out screen, all the way back to that classic cafe tail. The tank has neat touches of Manx for the team that tames the TT and the sumptuous leather seat with its frame matching stitch just ties it all together. But onto a good thing with the alloy and VR kept the theme coming using a cut-down Moto Guzzi alloy front mudguard with hand-built mount. Even the header and overflow tanks are custom made from alloy, with the hardlines done in the same way for good measure.

“There were obviously parts that were a must for a build like this, one of which being a FRAM race radiator, modified to sit farther back and to accept twin Spal fans along with the matching oil cooler.” These too get polished to a mirror shine and the chrome pulley covers are further exposed with the cam mounts machined back prior to powder-coat so they appear to float around the heads. The rebuilt engine shows off the signature Ducati open clutch, while every nut and bolt is now either polished or nickel-plated. Then there is the gorgeous stainless steel exhaust, 75hrs in the making, the countless number of impeccable welds all polished up in mirror-like magnificence.

With the teams obvious racing pedigree, suspension and braking were always going to be done right. The front forks are Ohlins taken from a Ducati 1198R and fit the frame thanks to a 998R lower and a Scotts upper triple clamp, complete with damper. The braking is no less impressive with the shipping container bringing in a set of Braketech full floating discs front and rear with Brembo radial front calipers and Brembo 19/16RCS master cylinders to provide the power. Making it all roll Alan selected what he calls “the sexiest wheels on the market by Kineo” and wrapped up in fat Pirelli rubber their form and function is just what the doctor ordered.

Working on the wiring, however, was a lot less fun, “There is so much to re-locate, and with Ducati’s late ’90s wiring, a mix of analogue and digital, it makes for a lot of wiring and very little places to put it all.” But Alan more than made it work, with keyless Motogadget ignition, sweet STM 5 button switchgear on the Renthal bars and LED Rizoma indicators to ensure everything was road legal. There are simply too many modifications to mention, the re-valved rear shock with frame matching spring and polished reservoir an example of the extreme measures taken to ensure perfection. The result of VR Customs hard graft and enormous skill is the ultimate Ducati cafe racer, truly at home on the road or track and looking a million dollars just standing still.