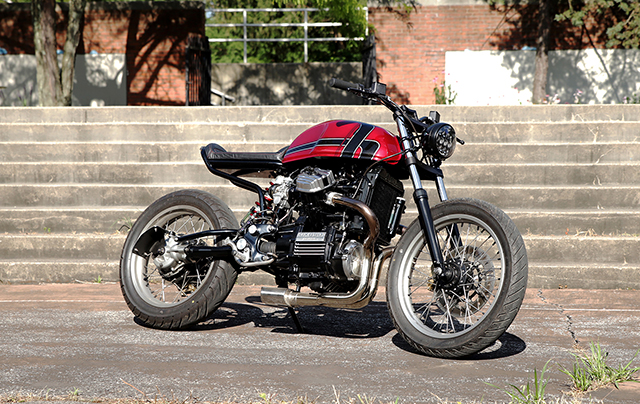 As the big corporates gain a larger foothold in the custom scene it can be easy for the vital grassroots to be left behind. But each year Bear of Old Bike Barn throws the Greasy Dozen Run and selects 13 backyard and small shop builders to create machines for the event. While for some it kick starts a stalled project, for Phil of 6th City Cycles it was the final piece of the puzzle in bringing a dream build to life. From their small garage in Cleveland, Phil and his team packed a Honda CX650 motor into a CX500 frame and finished it with all the fruit, christening the steed Recoil. 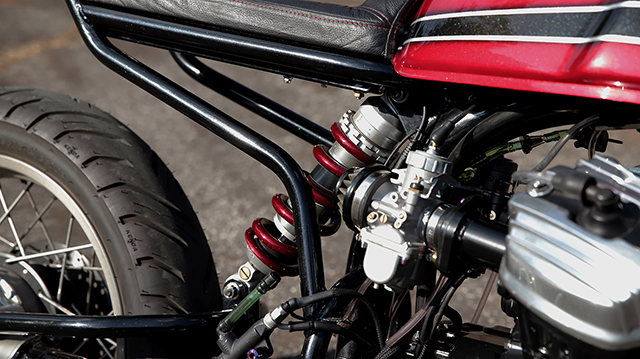 The 6th City Cycles shop came to life in 2017 and operates out of a small 20×20 garage in the Ohio city. “I started with my across the street neighbor Eric Smyszek and now my next door neighbour Melanie Andeits also works with us. We are a great team and I couldn’t do what I do out them,” Phil tells us. He’d previously built a CX500 but the experience nearly put him off the bikes for life, when he battled with an engine that had been butchered by the previous owner who’d welded the weep hole shut from inside. 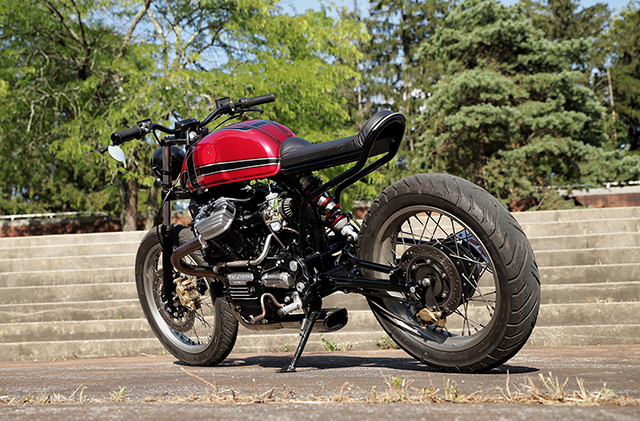 But having become a Murray’s Carbs dealer, Phil was on the phone to the man himself when an idea came up. “To put a CX650 engine in a CX500 frame and from then on I ran with it. It was fun a smooth build and holy crap is it fun to ride,” Phil smiles. With an old CX500 frame laying around the shop and many of the other basic parts acquired from Murray for the build, the Cleveland outfit could get to work and with the backing of the Greasy Dozen sponsors it meant that corners wouldn’t have to be cut in bringing Recoil to life. 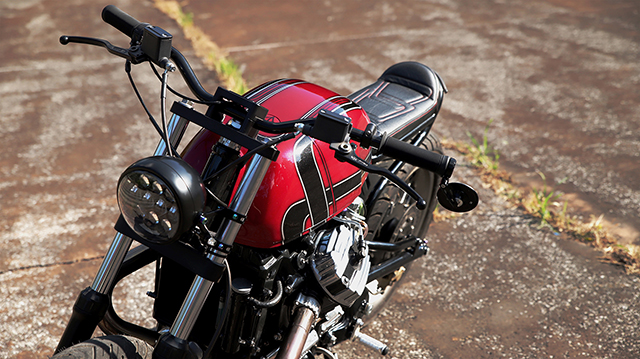 First up the old frame needed to be tackled and the decision was made to ditch the ungainly subframe and twin shock rear that goes with it. With some help from Clint Pecoraro and HMF Racing the entire back end has been cut off with an all-new tube style subframe welded in place. This creates a far smoother look and with the up-kicked tail helps to show off the full rear wheel. Next, the shaft carrying swingarm had to be equipped to deal with the mono-shock setup and rather than simply weld on a mount, an entire new upper section is brilliantly fabricated. 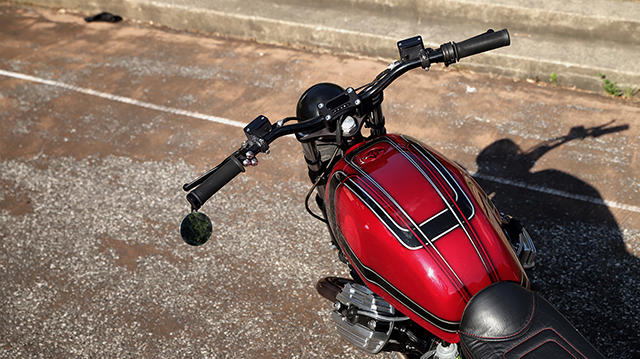 With a big part of the 6th City Cycles business now including a powder coating operation, the parts didn’t have to travel to get their hard-wearing smooth black finish. Putting the bike into a roller things start at the front with an XS650 set of forks fitted up to the frame with a pair of Cognito Moto triple trees. The braking is significantly improved with the use of a four-piston Ducati Monster setup. While at the rear the disc conversion features an underslung Brembo caliper and the shock is courtesy of an Aprilia Shiver. 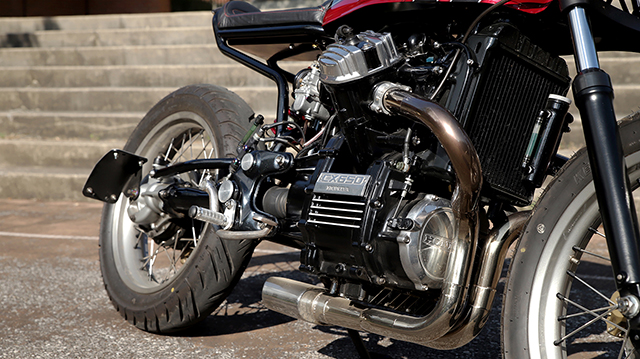 Anybody who knows the CX500 well will realise the tank is huge and wanting to keep the lines but change the proportions Phil had a plan, but it wasn’t easy. “My favourite part of the build is also the hardest; the gas tank, I absolutely love the factory tank so I sectioned it taking 2 inches out.” The new dimensions are far more befitting of the new builds stripped-down look and perennial painting powerhouse Kacey from Krossover Customs worked his magic to match the fabrication skill. The seat is from a sketch Kacey did on a napkin, replicated in cardboard and then sent to Robs Custom Trim to be turned into the real thing. 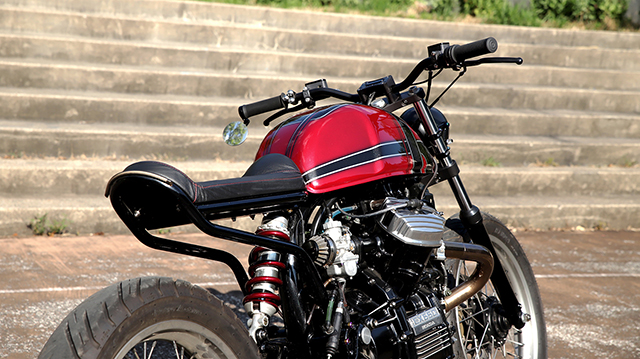 Up on the flat bars, in addition to the Motogadget switchgear, you’ll notice the addition of an extra reservoir. This forms the basis of the clever hydraulic clutch conversion performed in house using parts from a Ducati Multistrada. While finishing off everything nicely and giving the project a timeless appearance is the conversion to a spoked wheel set up from the good folks at Cognito Moto. 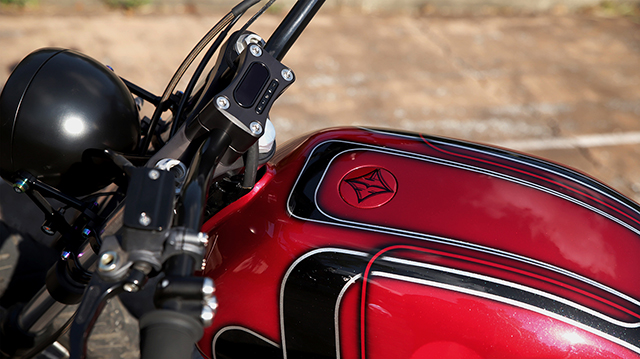 Thanks to the generous work of The Greasy Dozen, shops like 6th City can show off their full potential and Phil couldn’t be more grateful, “So many great builders get their first exposure there and I’m honoured to be one!” 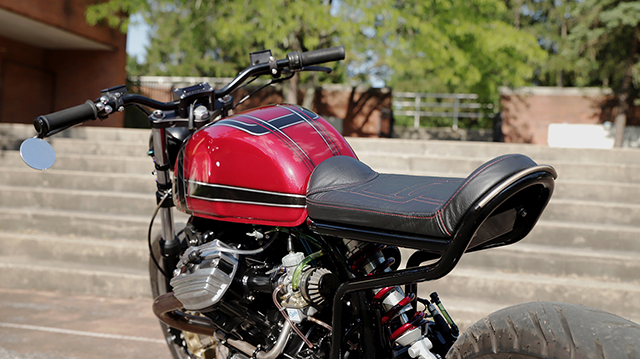 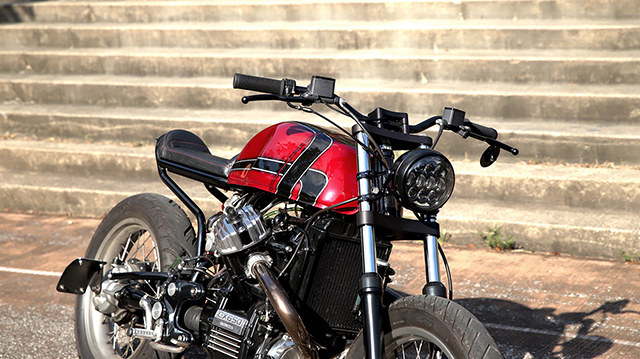 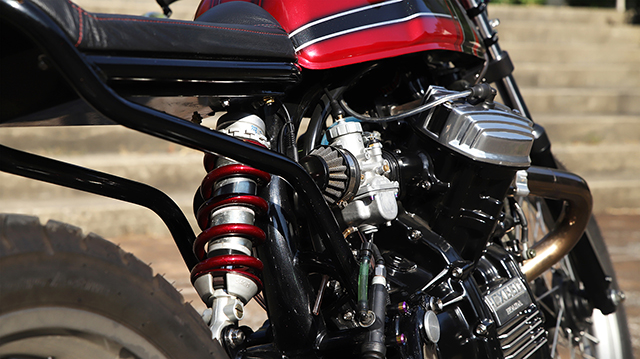 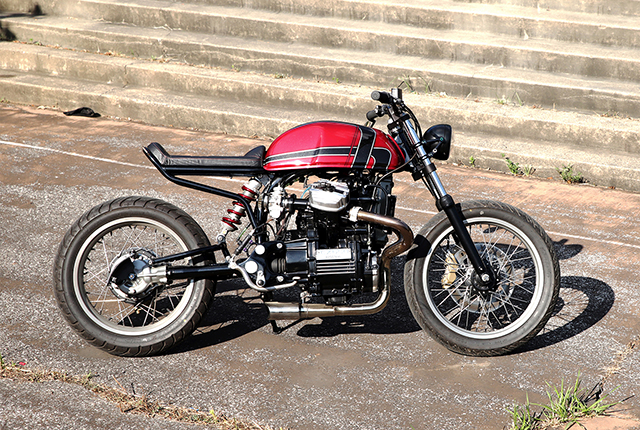