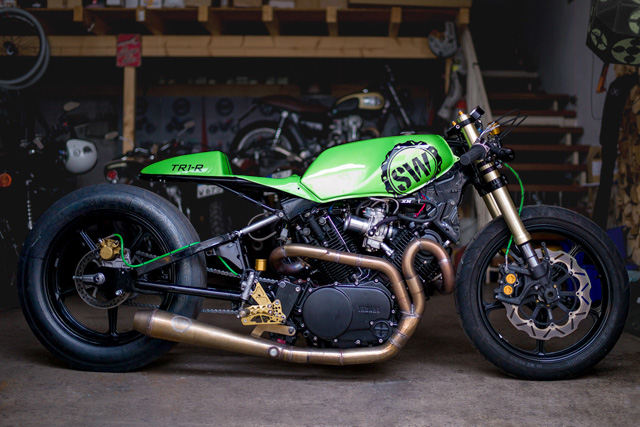 Motorsport has always played a critical role in both the custom car and bike scene; at some point the need for speed gets so extreme the track is the only place to express it. The NHRA might now sanction the F1 equivalent of drag racing but as the name suggests it all started with a bunch of guys and their hot rods. In the custom bike scene everything from the Classic TT at the Isle of Man to the resurgence of Flat Track racing and the modern-day Burt Munro’s at the salt lakes, racing and custom bikes are once again going hand in hand. The latest phenomenon and particularly popular in Europe is sprint racing, run over an 1/8th mile drag strip events like the Glemseck 101 near Stuttgart are creating a hell of a buzz. For Tom Thöring of Schlachtwerk the draw was just too strong to resist and his nitrous slurping 1981 Yamaha TR1 is ripping up the strip and collecting the top prize. Like many motorcycles that have gone onto be classics the TR1 wasn’t exactly a roaring success when it came to sales figures, it had been pitched to take on the twins of Ducati and Harley but the public wasn’t having it and a year after its launch a well-respected industry expert summed up the mood. “On the road the TR1 has proved to have neither the speed and agility of the Ducati nor the sheer power of the Harley Davidson,” so you’re saying it’s shit then? Not exactly. What customisers have gone on to prove is that the big Yamaha is more than capable of excelling in many areas, but first you have to strip off plenty of the 220kgs.

Tom’s donor bike had been kitted out with touring accessories and was an obese 255kg when it showed up at his door, “after the shipping company brought the bike to my garage, all I saw was a big monster with big fairings, as tall as I am, with radio and all of those aerial things… so I started to take off some parts, and at the end of this session 100kg of trash was laying on the floor.” Weight stripping is something Tom does best, an expert builder of some of the world’s best Kawasaki W650’s he makes them fast by keeping them lean. The TR1was in for the same treatment and has essentially gone through three transformations, from modified street bike, to part-time racer and now the 2016 full-blown drag bike that Tom calls “Skinny Beast”. With the bare frame up on the bench the serious work began, the entire subframe was cut off and even the pressed steel frame that uses the engine as a stressed member was further cut back.

Absolutely anything that wasn’t 100% necessary for racing was cut off, ground down and thrown away including every bracket insight. Then Tom fabricated a new and significantly smaller rear subframe from round bar that maintains the slim profile of the bike. But the big TR tank gave far more girth and weight than was required and so a much smaller RD80 tank was tracked down and new mounts made so it slots over the frame. “I mostly like the very slim line, the widest part is the front fork, the whole bike looks very small and skinny” So with that profile to maintain and the new sleek tank in place a tail section had to be fabricated to match that would sit over the new subframe. With the RD tank considerably shorter in length it also meant crafting a tail-piece that would suspend the rider closer to the centre of the bike. For this purpose there was really only one material to use and the fact it weighs less than nothing doesn’t hurt either. The entire tail section was crafted by Tom from carbon fibre, neatly matching the contours of the tank while providing a slick-looking racing hump at the rear.

The last piece of the bodywork puzzle is the front number board that neatly wraps around the single tacho that is all the instrumentation required. The rest of the controls are just as simple, with a push-pull quick action throttle, new brake and clutch levers and absolutely nothing else on the clip-ons. Finally the whole lot could be sprayed in the lime splice green with an array of custom Schlachtwerk graphics in black. Now that it had the look it was time to create an engine that would destroy the competition and Tom turned to German TR1 expert Sepp Koch. The party starts with a factory short block that is fitted with a custom BT1100 crankshaft, pistons and cylinders. Knowing that the laughing gas would be part of the equation a set of big dollar Carillo conrods get the job of keeping everything together. Two valve heads are from the lower capacity XV750 and with custom camshafts they provide superior flow at high rpm. With all that extra gas flow potential, Tom then fabricated the stunning 2 into 1 stainless steel race exhaust that features an etched Schlachtwerk logo on the lightweight muffler.

To fuel the fire the standard carbs would just never do and have been replaced with the popular Dell’Orto PHM 40mm items breathing through custom 70mm velocity stacks. But it’s what’s plumbed in behind them that really make things interesting, a Nitrous Express system that can deliver an extra 10-70hp depending on the chosen jet size. This is fed by a small 1lb bottle on the bikes left resulting in 150bhp at the rear wheel with a final weight of just 160kg. For the 2016 version the suspension setup is now all about drag racing and unless you want to lose your fillings this is not a bike to be ridden anywhere but on the smoothest of roads. To increase traction and keep the nose on the ground the swingarm has been extended by 80mm with steel plate helping to position the rear axle as far back as possible. That swingarm might have once swung a monoshock up into the frame but it is now rigidly mounted with steel round bar replacing the entire unit with rose joints and each end allowing for fine tuning of the bikes height. Up front a set of 2004 Yamaha R1 forks have been adapted to fit the older TR1 frame with new bearings in the headstock providing the right inner and external diameter for the change. The forks have been professionally lowered and are hard sprung to not only get the bike down in the weeds and out of the wind but to control the amount of rearward pitch the bike experiences at launch. An extra benefit of the modern forks is the brake setup that accompanies them, although one side has been ditched, the wave rotor and four piston caliper are a considerable improvement over stock. At the rear there is also the addition of extra stopping power that is vital given the terminal speeds the bike is capable of and the often limited run off areas at some race meetings. A single drilled disc is clamped by a Nissin gold caliper that is secured on a custom mount and fed its fluid by a body matching green braided line. With the TR1 originally coming with a drum brake rear, a master cylinder was required and adapted to fit the frame with a gold fluid reservoir. Giving it a foot full of pressure is a custom set of gold rearsets with infinite adjustability and a matching unit takes care of cog swapping on the left hand side. But look closely to the linkage and you will notice a small black unit with a cable running out of it; showing just how serious Tom is at taking fractions of seconds off his 1/8th mile times he’s adapted a quick-shifter to work with the old school electronics. But it doesn’t stop there as he also sourced a set of big dollar lightweight wheels from PVM that reduce unsprung mass and help get the rear wheel up to speed to prevent bogging down off the line. That’s even more important when you look at the rubber fitted, the front is standard road tyre but the rear is a 4.5inch wide MH Racemaster drag slick. It obviously works as Tom took out the 101 Cafe Racer Sprint at Glemseck in 2014 and returned in 2015 to beat out 32 other riders for the big trophy in the 101 Sprint International. Sadly the 2016 event saw a minor mechanical failure but with it already rectified the Skinny Beast that wears “The Faster Grandma” logo on its clutch cover will be back very soon and according to Tom “this bike is hard to beat!”