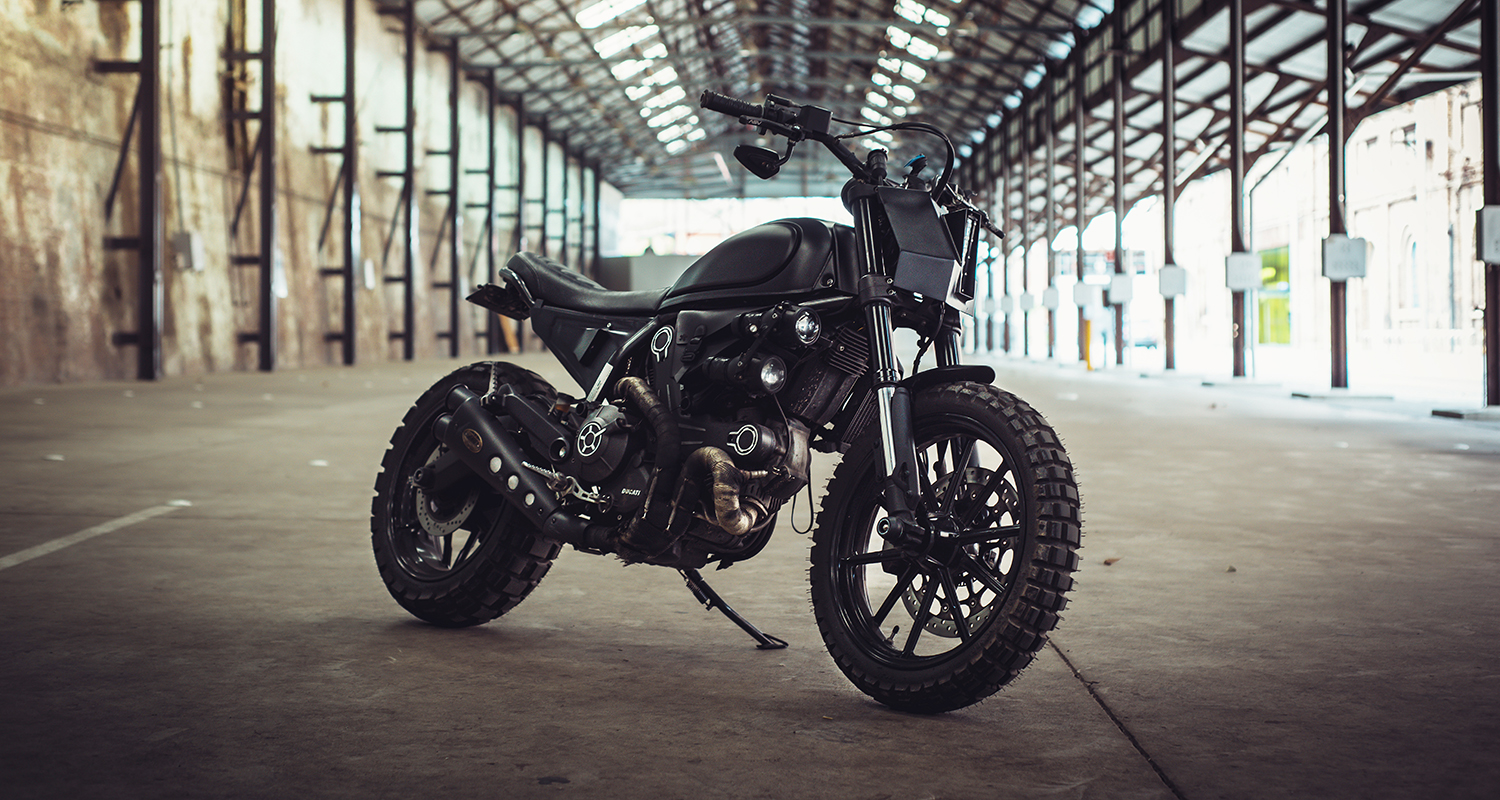 Severe drought, raging bushfires and then a global pandemic hit Australians like a sledgehammer in the space of just six months. You could be forgiven for thinking the final deathly apocalypse was coming to the dusty island continent, and to survive you have to prepare! Built for the frontlines of the impending darkness, Jye Smith from Sydney creative studio Doublestar has travelled beyond the Thunderdome and past the Fury Road. It’s Mad Max meets Aliens on this zombie shredding 2016 Ducati Scrambler known as Slayer.

While many dystopian inspired custom bike builds and hot rods look the part, they rarely function in a way that would see you survive more than a few seconds if lawlessness really came to town, for Jye this bike had to be better. “We set out to build a post-apocalyptic bike that wasn’t just another rat-scrambler but rather a new era Ducati production bike suitable for hunting zombies. The Ducati Scrambler was a perfect base to evolve – a single frame to be stripped back to be armoured and armed. Enter the Ducati Slayer,” Jye smiles.

Living in Sydney gives Jye access to some of the most talented people in the Australian custom bike scene, but first, he had to get his idea down on paper so that each piece to be added to the bike would come together in a cohesive manner. Minimal, sleek and all blacked out was the look desired and James Sinclair of Spreadcheese Fabrications crafted the armoured faceplate to allow for an off-centred LED headlamp. Which is matched up with a custom fabricated rear guard and side covers, spring guard, and tailpiece for close-range protection.

To get things stripped down, the cumbersome and slightly goofy factory Ducati Scrambler seat has been tossed aside and a slim profile leather unit bolted down in its place. But there is more of the black hide with custom leather grips and saddlebags by Denny and Josh at Port & Hide Leather with each subtly embossed for discrete checkpoints with the DOUBLESTAR insignia. And according to Jye this “ensures only the medical and mechanical essentials are taken from basecamp during patrols.”

Oh, you think he’s playing? Then look closer and you’ll see the stealthy Mtech tactical axe in non-reflective black steel swinging from the side, with its own leather cover for protection. But with all this darkness has to come some light, and the LED headlight joined by a set of twin globe hunting lights “illuminate night into day and offer the rider a long-distance view of the road ahead.” The rear features a discreet red LED for those following behind and the whole system starts with a lightweight Antigravity lithium battery all wired up by DC Electric Co.

Of course, if you’re going to be taking on the wastelands you need to be able to get away in a hurry and the lightweight and sweet singing 803cc L-Twin does a good job of it. But you can always have more and the Zard Low Mounted Silencer at the end of the wrapped headers gives an extra kick as well as playing the perfect soundtrack for the action. The exhaust change requires a re-tune, something too many neglect, but RB Racing fitted a Dynojet Power Commander to get it perfectly dialled in.

Starting with the Full Throttle variant of the Scrambler means the factory fitted rubber in most countries is dual sport Pirelli MT60s, but these were nowhere near aggressive enough for Jye who went with the deeper cut Continental TKC80s. “Which were chosen as the perfect balance between street and the bush where rain and morning due leaves things muddy and unpredictable.” While the factory suspension remains in place with the Kayaba 41 mm front forks and preload-adjustable rear shock providing a compliant ride in all conditions.

The factory controls remain relatively standard, with the exception of a set of shorty adjustable levers from ASV and joining them on the bars are underslung inboard mirrors, so the dorky big ear originals can be discarded. Axle sliders provide some extra protection and then all the new parts, plus the stock tank were, handed over to Colourfuel to work their magic with the paint gun and lay down the only colour that was ever going to work, matte black. Jye had a blast creating the bike and even more fun ripping around, so even if the end times don’t eventuate this year, he’s still prepared should the armageddon arrive!