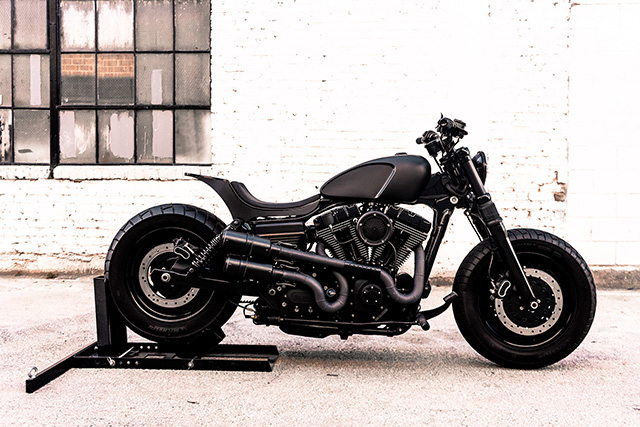 The Colt Wrangler from New Braunfels, Texas, has become well known for building clean and classy looking smaller café racers and electric bikes. So when a customer contacted him a few years ago about customising his Harley-Davidson Dyna Fat Bob, Colt got a little bit worried. “I thought to myself, ‘Does this guy really want to bring this bike to me? Maybe he’s at the wrong shop.’ The customer, Marc Snoddy, didn’t have the wrong shop and was adamant he wanted the former bull rider to build him a bike, saying he would ride the bike over and bring some photos for reference. “I feared that he was going to show me pictures of a really awful bobber with ape hangers that he wanted to replicate.” Luckily, Colt was pleasantly surprised when Marc showed him a picture of the “Gorilla” built by Rough Crafts. That got Colt excited, as he’d always been a fan of Rough Crafts and was looking forward to building a murdered out Harley on a much needed diet. We like to call it the Slim Bob diet. 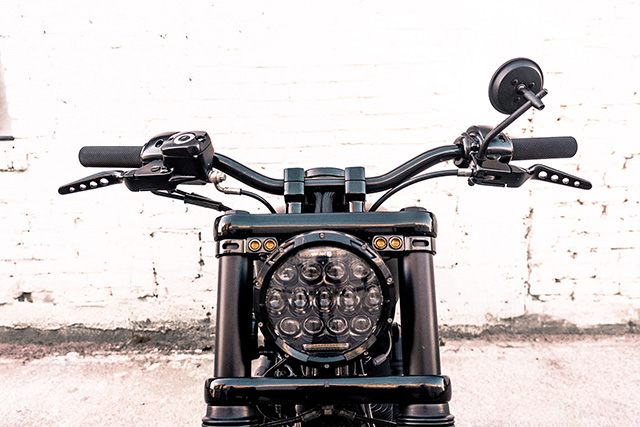 Over time, Colt powder-coated all of the chrome, shaved and drilled the levers, replaced the fat bars with internally wired 1″ tracker bars, installed a Kuryakyn intake and built custom exhaust with a distinct bark. He also used a 7” LED Jeep headlight paired with discreet Joker Machine front turn signals. “We chipped away at it in bite-sized pieces and it started looking really good. It was turning heads and standing out from other Harleys, but Marc wasn’t done yet.” 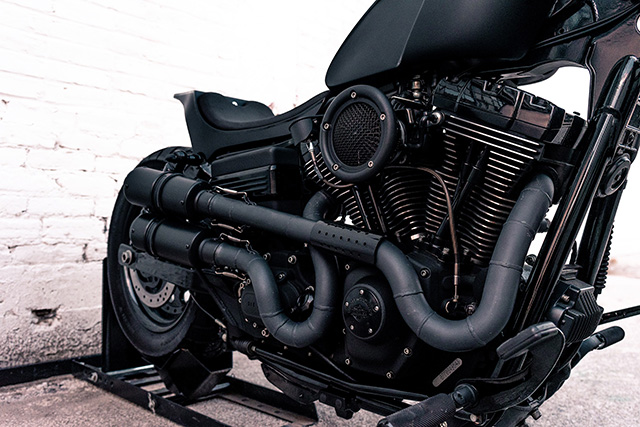 The stock Dyna Fat Bobs have a huge five gallon (18.9 litre) tank, which Marc wanted to swap for a smaller Sportster style tank. “This wasn’t going to be easy while keeping all of the factory functions. Besides holding a large fuel pump, it also houses the ignition switch, indicator lights, gas gauge, and speedometer on top of the tank.” That’s a lot of stuff to relocate or replace. 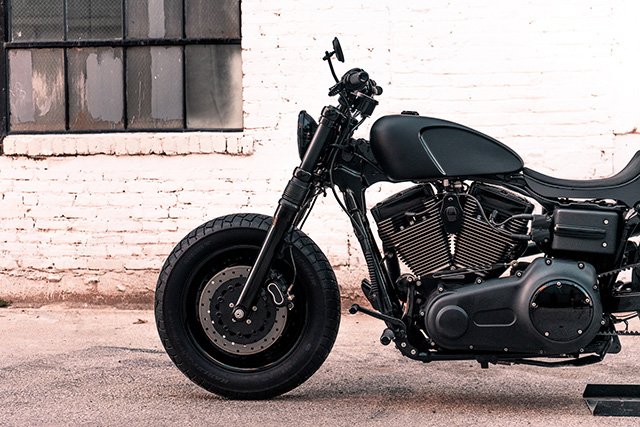 After doing some research, Colt figured out that the Sportster fuel pump would work, so he ordered an EFI “Legacy” style Sportster fuel tank. He then made a new tunnel for the tank that was wider and much deeper, then relocated the rear tank mount for a cleaner profile. Once that was done he still needed to figure out what to do about the speedo, indicators, and ignition. “I found a really nice ignition switch relocation made by Big Bear Choppers that goes in place of the factory horn. Done.” 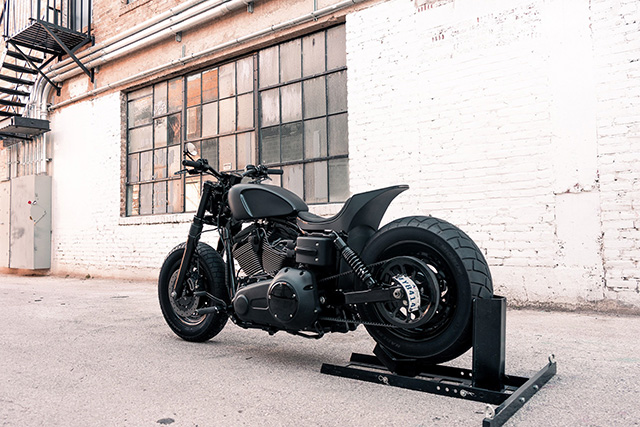 After changing the tank, Colt needed to find a more discreet speedometer, looking for a smaller speedometer with the indicator light integrated to fit between the handlebar risers and the gas tank. “I came across the Koso TNT-01. It was just what I needed. Once that was complete, thanks to help from my friend James Halm, I added an oil pressure gauge kit made by Jerzee Customs.” 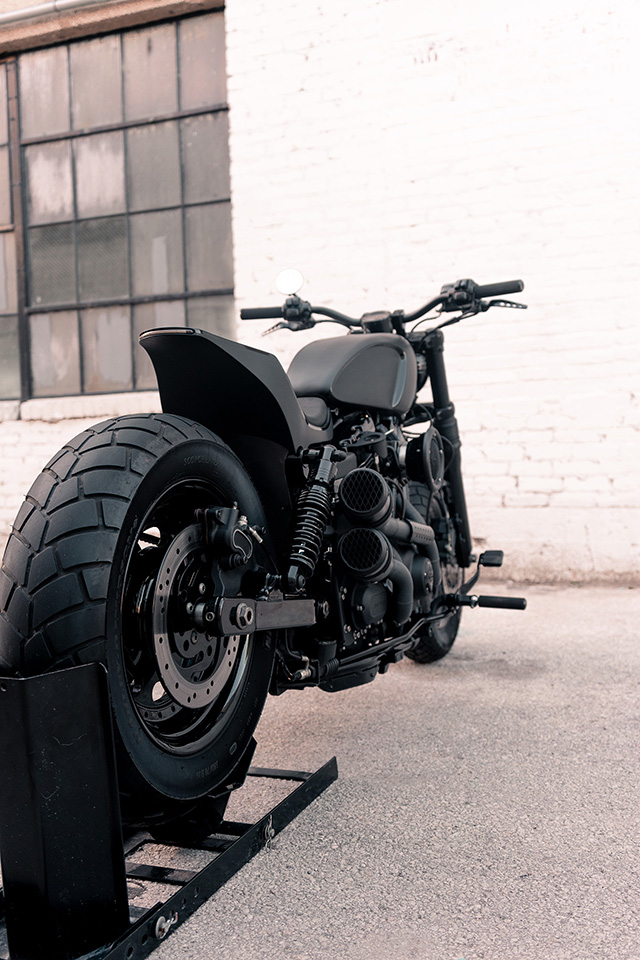 Now the pièce de résistance to this project is the tail section. “I really wanted to go with a street tracker tail section since it is really uncommon on a Dyna. Marc was understandably hesitant at first but after some thought he gave me the thumbs up.” 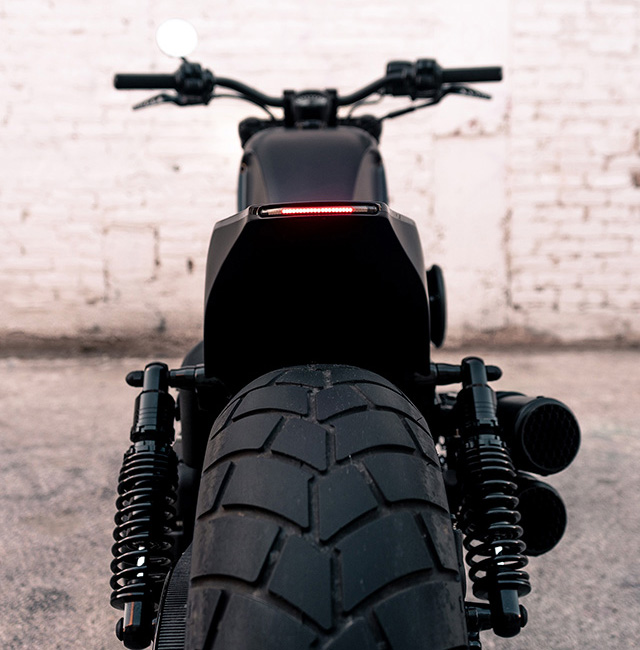 So Colt got to work building a small subframe to raise the tail section higher to line up with the tank. After building the tail out of aluminium sheet, he embedded the LED tail light strip from Radiantz LED into the tail. Then, to finish it all off, he sent the tail section and tank off to Chisca Customs in New Braunfels Texas for the black paint.

Customising Harley-Davidson Fat Bobs aren’t usually Colt Wrangler’s forte, but sometimes bike building is like riding a bull: the bigger they are, the more rewarding the experience turns out to be. 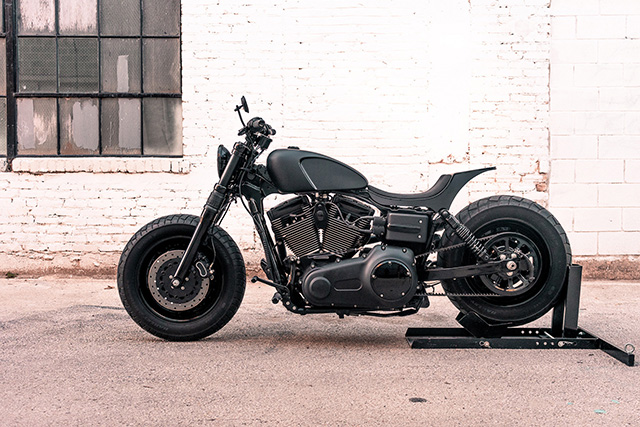