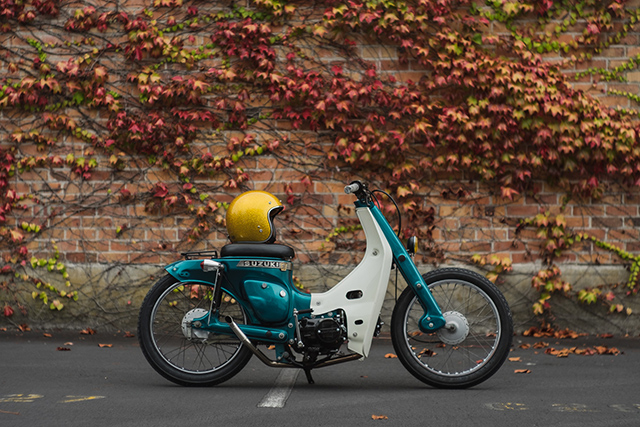 Riding motorcycles makes me grin from ear to ear. I’m sitting here recovering from a motorcycle accident I had a few days ago. After a few broken bones and a few days in hospital, a lot of people have asked if I will ride a motorcycle again. “Of course,” I reply, without even thinking about it. Because riding motorbikes make me happy. And the size of the bike doesn’t matter either. Today’s bike is a little bit different to what we usually feature, but I know one thing: this little Suzuki FR50 puts a big smile on the face of engineer and bike builder Mike Dodd every time he rides it. 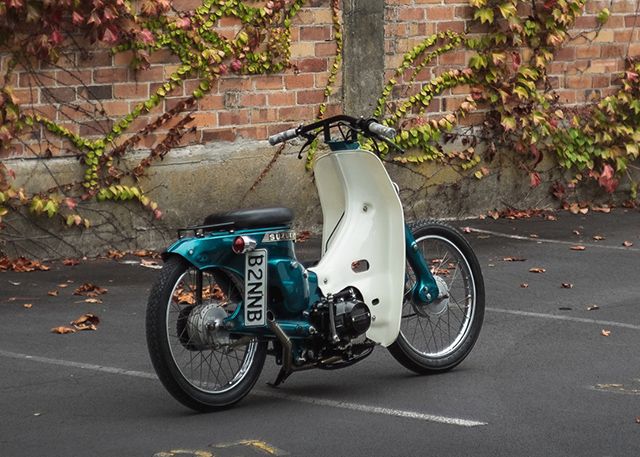 It’s not the first time we’ve featured work from Mike, who comes from Auckland, NZ – his DR650 cafe racer was a crowd favourite last year. This time around, he picked up a sorry-looking late 70’s Suzuki FR50 for next to nothing. “The idea was to fix it up and use it as a bit of a utility scooter – pick up the beers or fish and chips on a Friday night sort of thing. After fixing it and riding it around for a week or two I decided that it needed a bit more power, so out came the grinder.” 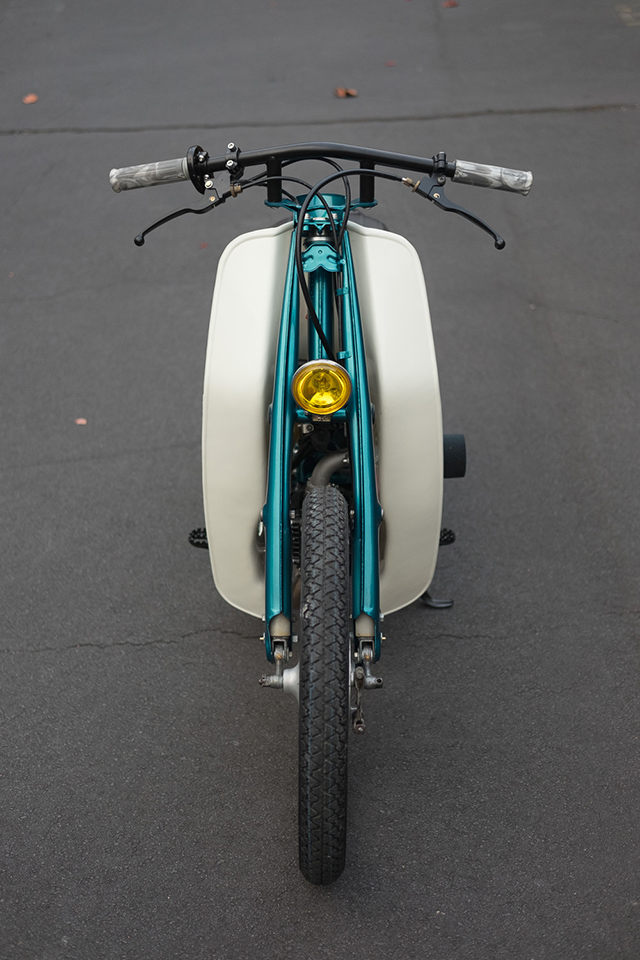 He started by cutting away the whole underside of the pressed steel frame and made some mounts to fit a new 125cc pit-bike (or mini-motocross) engine into it. “I decided to change up the styling a little bit while I was at it to go for a bit of a chopper vibe – the irony!” Mike set himself a very minimal budget, so wanted to make as many of the parts himself. “I bent and welded up the lane splitter bars from some leftover tube I had laying around, fabricated up the new rear rack to be just big enough for a 6 pack of beer and fabricated some hard-tail struts to drop the rear guard close to the wheel.” 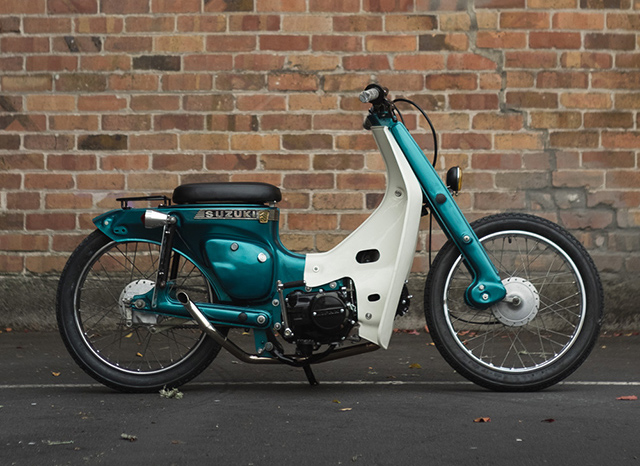 Mike also fashioned himself a seat pan and pad with hinges for easy access to the fuel tank, which he got covered by a local upholsterer. He then trimmed and bobbed the rear guard to lose some of the visual bulk from the rear end and welded up a stainless exhaust from some stainless tube and bends. “I even spent more hours than I would like to admit manually machining the tail light from a piece of scrap aluminium I found and polishing it up.” 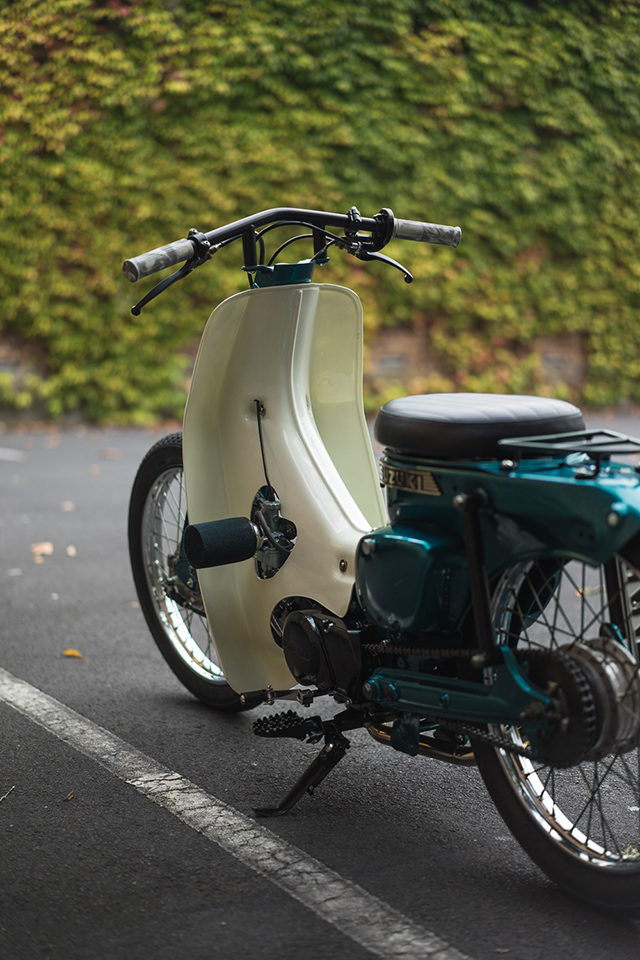 Then he stripped the whole bike down for paint and powder-coating, giving the frame and forks a beautiful metallic green finish, and everything else was powder-coated black. “I modified the leg shields to fit the new engine setup, eliminated anything unnecessary to get it as light as possible, reassembled all the newly painted parts, gave it some new chunkier tyres and used a small fog lamp that I found cheap for a headlight. I rewired the bike from scratch, relocated the ignition to the side cover and adapted a selection of levers and controls to fit and work as intended.” 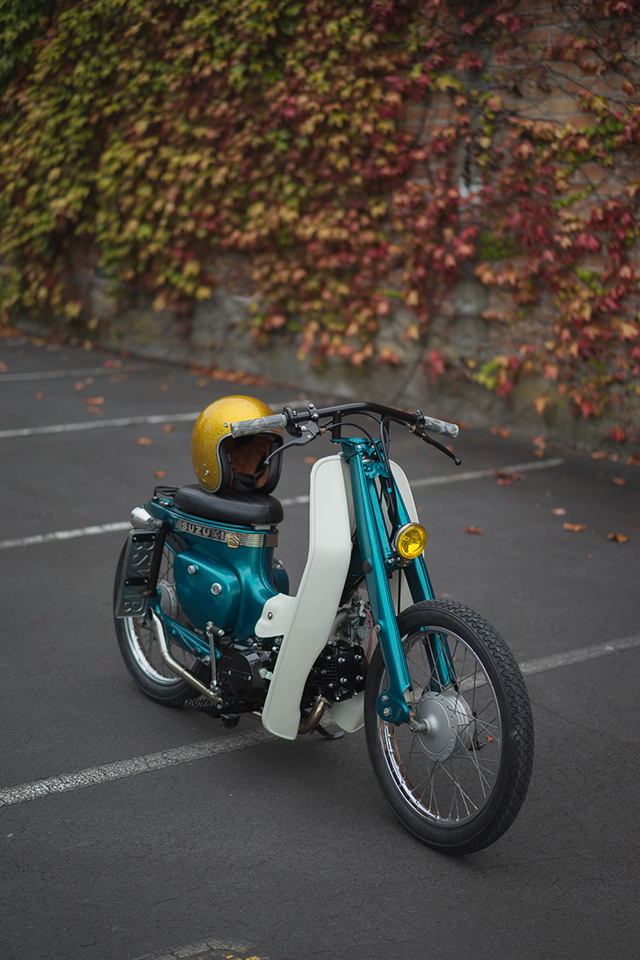 Mike didn’t spend much money on this little project, but it has surprised him with how much fun it’s been riding it around the streets of Auckland. “You can’t hop on it and not start grinning. It’s not breaking any land speed records – although I am surprised at how well it goes.” Mike was also surprised by how much attention this little bike gets. “Multiple times I’ve been riding it down the road behind a car, only to see the window of the car wind down and a big muscly arm thrust out the window throwing up a big shaka my way as I ride past!”

Seems like this bike is putting a smile on more than just Mike’s face. 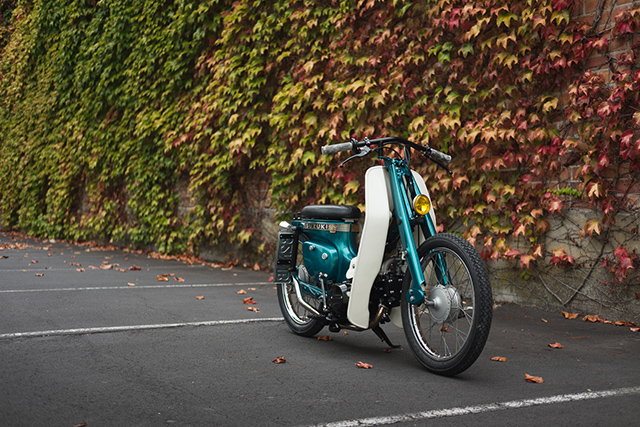