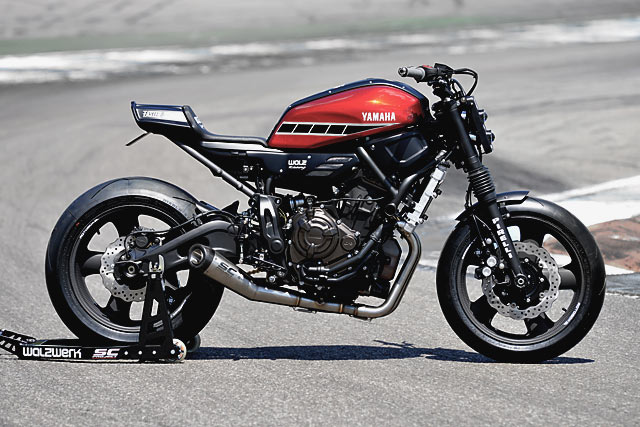 A few years ago, it would have been easy to dismiss Yamaha’s ‘Faster Sons’ and Yard Built campaigns as mere marketing exercises. But the bikes that have been created as a direct result of the program are as plentiful as they are cool. And just when you think that it might have run its course, there always seems to be yet more moto goodness to come. Germany’s WalzWerk Racing is the latest shop to team up with the Japanese giant, and their ‘Apex Ruler’ XSR700 Tracker seems to suggest that the Yard Built campaign still has plenty of go. “Our shop is located in Mannheim, South Germany,” says King Walz. “It’s close to the famous Hockenheim track. The shop was founded by myself in 1991, but I’ve been building bikes professionally for almost 30 years now. I’ve built them for the likes of Brad Pitt, Kimi Raikkonen and Sebastian Vettel, just to name a few. And in 2007, I established WalzWerk Racing, which is dedicated to real, rideable custom bikes”. Walz’s inspiration for this build was from classic tracker designs, combined with a little WalzWerk Racing attitude. “Since I’m still actively racing in the European Triumph Cup with a Street Triple and in the International Endurance Racing Series with my Ducati Panigale 1199R, I like to think I know how to get a bike to handle”. The bike was supplied by Yamaha Germany as part of their Yard Built 2017 campaign, and Marcus was chosen to build the German bike with the finished products from all over Europe being revealed at this year’s Wheels & Waves. “This is my 4th Yard Built for Yamaha, that’s why the bike shows the #4 on the front. By the way, I did the very first Yamaha Yard Built back in 2011 together with Roland Sands and Ludovic Lazareth from France”. Marcus’ main goal was to build a very light, superbly handling machine, so saving weight was a huge deal for him. “I decide to go with a set of super light RotoBox wheels from Slovenia, so I took the bike to the factory and had them build and fit the wheels there”. The wheels were then wrapped with a set of road legal Pirelli Supercorsa semi-slick tires.

A few days later and Marcus started to design the bodywork: a new rear tail section, new side panels, a new front fender and a track-inspired headlight board. “We manufactured a total of three different prototype gas tanks, and none of them really worked all that well. Finally, I realised that the best results were from the stock tank”. He continued with the weight savings by fitting a 520 Moto GP chain and a super light aluminum RotoBox rear sprocket. The stock wiring harness was cut down leaving only the wires which were necessary. Then it was time for another journey; the bike made its way to Milano’s SC-Projects, where a super light Moto GP-grade 2-into-1 exhaust was made and fitted. Pedrosa, eat your heart out.

“Back home, I started working on the suspension. Since I wanted to keep the look of the bike classic, I wasn’t keen on upside down forks. Instead, I kept the stock front end, lowered it about 5cm and had Wilbers Suspension make a set of progressive springs for it. On the top, we used a set of our own preload adjusters to complete the new setup”. On the rear, a high-end Moto2 monoshock was built from Wilbers Suspension. LSL supplied a set of racing rear sets, handlebars, handlebar mounts, brakelines, brake and clutch levers. MotoGadget provided one of their mini speedometers while some WalzWerk products, like their racing filler cap and handlebar weights, were added to the bike.

When it comes to the paint, Marcus says he only trusts friend Chiko from the city of Pforzheim. He is responsible for the metal flake paint job on the gas tank; the base colour is the genuine metallic red of the original Yamaha RD250 2-stroke rockets. All the graphics are painted, with not a single sticker in sight. [superquote]“With all the fluids bar an almost empty tank, the bike weight a tiny 148 kilos”.[/superquote]

The final modifications were a K&N racing filter and a racing airbox cover from DNA. “Last but not least, I mounted a Power Commander V and put the bike on a dyno to create a matching map. The result was 82 horsepower at the rear wheel. After that we put the bike on the scales to measure its weight; with all the fluids bar an almost empty tank, the bike weight a tiny 148 kilos”. “The hardest part and the most time went in to building the three gas tanks. They really gave me some sleepless nights, and even though we ended up using the stock tank, I’m really pleased with the final result and I would probably do it exactly the same way again”. The thing I like the most is the stance of the bike with its short wheelbase. Even when it’s standing still, you can still imagine how much fun it is to ride. And I’ll tell you, it is fun to ride. I did about 350 kilometres (220 miles) in it in two days around Biarritz and I normally ride no more than 100km a year on the street, as I do most of my riding on the track. It’s that good”.