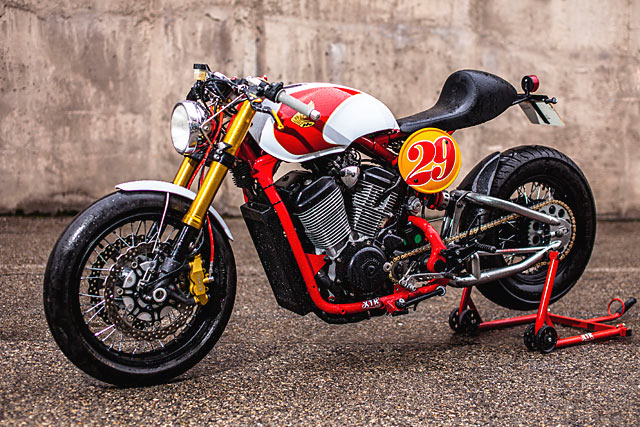 How do you tell a master bike builder? In my not-so-humble opinion, it’s their ability to transform a bike to the point where, magician-like, you are left scratching your head as how the hell they did it. Sow’s ear into silk purse? Try sow’s ear into deep space probe. Knowing this trick all too well, Spain’s XTR Pepo has clearly decided to see if they couldn’t outdo themselves. And I’ll be damned if they didn’t just go and actually do it, too. The bike you see here was once an embarrassingly uncool ‘97 Honda Shadow. Then abracadabra, it’s now one of the best-looking racers we’ve seen all year. Look out Siegfried & Roy, Pepo Rosell is in town. “I was born in France,” says Jose ‘Pepo’ Rosell from his busy Madrid workshop. “But soon I moved to Spain, where my family is originally from. I’m a qualified biologist specialising in fish farming, but a long time ago I changed this passion for another. Motorbikes. In the early days, I worked for several Spanish Ducati importers. Then I created Radical Ducati, where I designed and built my own race bike, the RAD 02, that was sold all over the world. Then in 2015, I created XTR Pepo.” For this bike, Pepo didn’t have any particular inspiration from famous race bikes or celebrated moments from the history of motorcycling. He simply wanted to transform a stock bike like the Honda Shadow into something polar opposite from where he started. Like a racer. “Really, it was a challenge I set myself more than anything,” he notes.

The bike’s seed was a collaboration between XTR and Motostion. They are one of the biggest motorbike spare parts companies in Spain. To start, they gave Pepo a completely disassembled Honda Shadow 400 from 1997. They he asked them for all the parts he thought he’d need to construct the bike. In essence, this is a totally recycled bike. And if this is what sustainable bike building looks like, we’re totally on board. The parts requested included some ZX6R front forks, Suzuki GSXR 750 clip-ons, and a tank from a Yamaha YBR 125 with a Suzuki GSXR 750 gas cap on top. Then came the serious, sleeves-up part.

“The first part of the build was to design the new bike. I pretty much did it all in my head. There was no drawing or renders. I’ve done this enough times to be able to picture something in my mind and know how to get to the final bike in real life. The first step was to create the tank. I created it mostly from scratch, but I included some Yamaha and Suzuki parts as I thought it would be better that way.” Moving onto the rear of the bike, Pepe fabricated the seat to get the look and lines he wanted before moving on to look at a suitable subframe to support it. Next came exhaust considerations; Pepe liked the idea of something that was both high-mounted and that didn’t merge the v-twin’s two pipes into one. He also began to ponder a new swingarm for the bike, but he couldn’t get over just how cool and classic the stock unit looked. So after a few small tweaks to the Honda factory design, it was all sorted. “When the fabrication process had been finished, I completely disassembled the bike for sandblasting and painting. Even the engine was pulled apart so I could replace the usual consumables: bearings, O-rings and the like. Then, when all the bike’s parts had been redone and painted, I started the final assembly process.” Once the bike was done and running, Pepo took it for a shakedown. Impressed with his own hard work, he decided then and there to get it officially certified as roadworthy in Spain with a technical inspection. Clearly, he thought it was too good to leave as a Sunday afternoon, ride around the block type deal. “Now it’s fully legal and ready for the open road.” “The hardest part of the construction was the rear of the bike. The original Honda frame here is very big and heavy, mainly because it was hiding all the electrics and the battery. Clearly it needed a cut, but to make a new one with a racing profile was not at all easy.” Pepo is thrilled with beating the challenge he set himself. “I really think I did it. The end result is a bike that looks so clean and so ‘light’ to the eye. And so racer, too. When you realise just what bike it came from, I think it’s OK to say that I am very satisfied with the work.” It’s a magic build, yes? What a transformation. And to think that he build something as complex as this all by himself. Almost makes you want to give up tinkering in the garage thanks to a the realisation that you’ll never be as good as Pepo. Almost, but not quite.