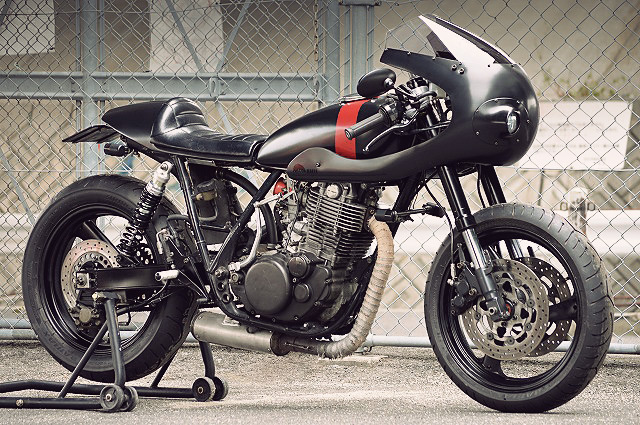 The back alleys of cities all over Japan have delivered some of the coolest custom cars and bikes from small workshops that punch well above their weight. From the Hyper Lemon tuner cars of JUN to the retro-tech bikes produced by AC Sanctuary – you don’t need millions and a huge facility to produce incredible machines in the land of the rising sun. And nobody exemplifies that spirit more than custom bike building genius Fujita Koichi and his one man operation AN-BU Custom Motors. Koichi takes that tradition even further, from his small workshop in Nagoya he works on both cars and motorcycles many from the 1980’s. He is a mechanic by trade but what sets him apart from so many is his style; AN-BU custom builds aren’t really café racers or bobbers, they don’t fit any particular category. But like so many artists, Koichi of the mechanical kind, has his own style and when you see an AN-BU bike there is no doubt just who the man behind the build is. And so it is with this 80’s racer inspired Yamaha SR400 known as Grace Racer; it’s industrial, it’s inspired by the golden era of punk, it’s designed to destroy the back streets with a purpose and it is 100% Koichi. The Yamaha SR400 is a cult bike in Japan and one of the main reasons the small bike custom scene is so strong around the world today. A reliable single cylinder that pumps out enough power to have fun, lightweight, old school design but with handling that makes it a hell of a lot of fun. Being the mechanic he is the engine in Grace Racer is a little beauty that’s built to blast, the fuelling has been drastically improved with a flat slide Mikuni FCR carb with a velocity stack.

With the extra air and fuel running through the 400cc engine the exhaust needed to match, so an increased diameter single pipe system built by Koichi flows under the engine, with a dirt bike muffler stopping just short of the rear tyre. Like almost every SR build Koichi has fitted a pod style oil breather, but rather than mount it to the block, full diameter pipe is retained to affix it under the seat. Both the raised height of the breather and the extra volume in the pipe means successful crankcase breathing without the oily mess, this build is all-purpose. The body work on Grace Racer scream AN-BU from the Rocket style range, this is the style that Koichi has become so admired for and he crafts it all himself. The seat is a slender solo seat (TYPE5) styled from fibreglass in-house with a steep hump to keep the rider locked into position. Extended time in the saddle of this beast is no problem at all as the padding is generous rather than plank like and has been covered in 1980’s jacket style leather.

The front fairing is signature Koichi; Rocket BALLE TYPE3 it has an overall shape of the 1970’s Ducati SS but with far more aggressive lines. Even the windshield makes a statement, flowing curves are ended at right angles, its part salt flat racer and part F15 and it looks just right. The headlight is side mounted, but rather than simply go for an easy flush fit, an additional piece of fibreglass is shaped and bolted into the fender to create a projector light look. To finish out the body work it was coated in a matte finish dark grey with a red horizontal stripe across the tank and neat AN-BU graphics down the sides of the fairing. Having a mean looking Industrial machine, with a nasty growl and the punch to back it up is no good if the bike doesn’t handle and stop. Well this might be one of the best SR400’s ever built-in those two areas as Koichi leaves nothing to chance. The wobbly stock stanchions are gone from the front end and in their place fellow Yamaha inverted forks have been fitted. Out back the bike retains the twin shock rear end, but now with fully adjustable shocks and height adjustable progressive springs. This is an SR that can be tuned for the weight of the rider, the style of riding and the tyres fitted. And while old school rubber looks cool the sticky new Bridgestone’s give far superior performance in every way. Pulling that performance to a halt is a twin disc front end and a single Brembo disc rear, old school low weight and modern stopping power gives the best of both words. Those brakes came courtesy of the Yamaha 3 spoke wheels they were bolted too and once again Koichi gets the mix of old and new absolutely right. Custom rearsets are fitted behind the line of the swingarm pivot point for the ultimate racer riding position. They are matched to low slung clip-ons that grab the forks considerably lower than a standard set of bars and allows the rider to really tuck in out of that cool night air. By now you realise just how purposeful this build is and why have a bike built to be ridden hard if you can’t run it on the street. So along with the single headlight, mirrors, bullet indicators front and rear and a small tail light all result in one thing, street legality. That number plate that hangs off the back, that is the sign the highlights what this whole build and culture of Japanese customisation is all about. When the sun goes down and the street lights come out, you find yourself standing on an overpass drowned by flood lights an industrial area below you and from the dimly lit industrial back alleys of Nagoya blasts a road racer with the attitude of the Sex Pistols and the growl of a fighter jet. You hear it coming, the exhaust popping and banging as it’s swung violently through the tight turns and rough little lanes ways. Then it appears in the distance, opening its lungs and firing towards you on that straight stretch of road. With each click of the gears it thunders closer to your face, the single headlamp like the Maglite of a cop staring you down. And then it screams by and every sense is captured in time, the smell of a carby-fed thumper, the scream of the single pipe and for a split second a bad ass industrial urban racer is just inches from your nose… aboard, Koichi! As the noise trails off and the cool air becomes silent again, you peer over the rail of the overpass. You caught the taste, tomorrow you shall return to that industrial area and find the man and the machine that change the way you view motorcycles, just look for the sign, AN-BU Custom Motors.