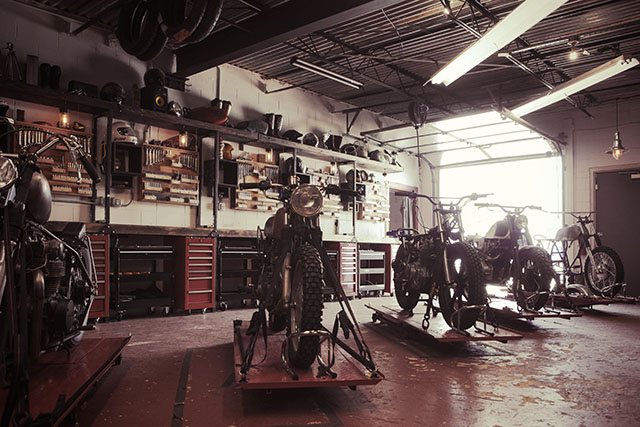 Roughly seven years ago my two sons turned sixteen, and not only had they far outgrown their XR-50’s, but they had reached the legal age where they could begin riding the backroads of Maine with me. I’m partial to newer Triumphs (I ride a Scrambler), but I wanted this step in their lives to be a learning experience. I hoped to teach them how to find a decent used bike, what to look for in terms of wear and tear, and ultimately how to take a Craigslist cast-off and turn it into a labor of love. Both boys seemed on-board with the idea, and we settled on early 70’s Honda twins due to cost, simplicity and availability. It wasn’t too long before we had a ’73 and a ’74 CL 360. Moreover, while the boys got busy tearing them down, I got busy looking for parts. Of course, I hadn’t told them that I hoped to turn them into cafe racers. Surprisingly, though, finding parts was not as easy as I had thought it would be. Nevertheless, I’m a stubborn old guy and I kept looking. Sure enough, I came across a beta site for a company that had not yet opened; Dime City Cycles. They appeared to focus on old Honda 450’s, but I figured I’d give them a try… Well, it has been seven years now, and I am proud to say that not only am I Dime City customer #1, but Jason and I have become good friends and shared more than a few rides, beers and stories together. Honestly, I’m not the most trusting guy, but it didn’t take long for me to realize that Jason was far more than a purveyor of parts. Of course, it is well known that Dime City put together a list of suppliers beyond imagination. If you need it, they probably have it-from rear- sets, clubman’s, carbs and shocks, to fiberglass seats, helmets, leather jackets and goggles.

As I said, though, Jason is more than a store front. (He’s actually been completely removed from Dime City Cycles for almost two years now.) So what does a guy who has ridden with Norman Reedus and Peter Fonda do? The same guy who has spent time discussing bikes with Jay Leno, helped create Cafe Racer TV on the Discovery Channel, made the first official custom second generation Triumph Thruxton R, and filmed himself doing doughnuts in the snow on a Ural… what does a guy like that do after Dime City? Isn’t it obvious? He has fallen in love with a life on two wheels, and now he wants to help others who have been stricken with the same fate. So, after a great deal of planning, and more than a few late nights burning leftover two stroke oil, Jason opened the doors to not only the next chapter in his life, but what could very well be the next chapter in yours: Standard Motorcycle Co. Standard Florida Co. is essentially your dream garage. Yes, yours, if you can appreciate a place with multiple lifts, every tool imaginable (in multiples), an on-sight motorcycle guru, revered guests who come in regularly to discuss every aspect of bike building, a lounge, and a brotherhood of like-minded riders/builders who simply enjoy being around each other. What Jason has created is a place unlike any other, where a nominal fee opens the doors to a rider’s oasis. A place where you are literally given the tools and the support to make your dream come true. The kind of place I wish had existed for my kids as we spent half of our time chasing down parts and tools when we weren’t pouring over old Clymer manuals. The kind of place where a guy with an infectious smile walks up and says, ‘let me give you a hand with a that’, and more importantly he actually knows what he is doing and is happy to share his knowledge with you. Then again, you may reside more than a few miles away from Standard’s brick and mortar shop. No worries, Jason has you covered. In addition to being one of the coolest garages you have ever laid eyes on, Standard Motorcycle is also working to build the industries first DIY inspired digital streaming technical library. (Hence their current Kickstarter campaign running to raise funds for camera equipment and personnel.) No, we’re not talking about run-of-the-mill Youtube clips shot by some guy’s girlfriend on her iphone. Each video is shot, edited and produced by Standards in-house production team. Moreover, the guys who are doing the all important ‘how-to’ part are well known professionals in the motorcycle industry aside from Jason. Whether you are interested in wheel building, suspension tuning, carburetor jetting or even a ground up restoration, Standard will have a video for you. And just in case you still are not sold, Jason is always looking for material for his next video. So if you just happen to have a need to sync the carbs on a CBX, or feel compelled to perform an exorcism on your BSA’s Lucas electronics, just let him know.

Of course, if you find yourself in the area (perhaps the kids are sleeping in after spending the previous day at Disney…), stop by Standard Motorcycle Co. and tell Jason that Judd sent you… then ask him about his ride on the BMW Scrambler.