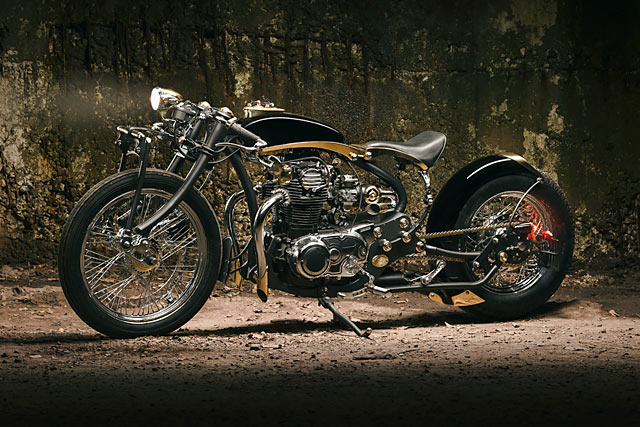 There’s something very cool about hearing from a shop that you’d almost forgotten about. Better yet, when they come knocking with a custom bike that takes your breath away, you know something big is afoot. So, like an artist emerging from their studio with their once-in-a-lifetime masterpiece, Bulgaria’s Galaxy Custom have just dropped this little piece of amazement after 5 long years of silence. Behold their beautiful ‘Duke’ Yamaha XS650 bobber. “The project took 5 years from start to finish,” says Ivailo Trendafilov, the shop’s conceptual thinker and lead designer. “We are a small group of gasoline lovers that started a workshop in 2011 in Vratsa, a small town in Bulgaria. The creator and lead engineer of the workshop is Angel Valkov. Angel Kotov is our metal guy and a great welder and Evgeni Veselinov does our electronics and engine repairs”. The bike’s base was an imported American Yamaha XS650 from 1982. “Right from the beginning, we had been planning something like this bobber for a Yamaha XS. The reason is simple; the bike has an exceptionally beautiful engine that owes much to the timeless British classics”. And while they clearly love the donor bike, they were committed to the idea of doing something truly different and unique – something that really set them apart from the more usual ‘plug and play’ approach to customisation. “That is why we only used the Yamaha’s engine, gearbox and wheels. But for the whole time we worked on it, we focused on the fact that whatever the end result, it had to be fully functional”.

[superquote]“They were committed to the idea of doing something truly different and unique – something that really set them apart”.[/superquote] The Yamaha started out as a 3D model that allowed the Galaxy team to fully grasp both the overall concept and the minutia before they started getting their hands dirty. “All the parts were made entirely in the workshop, using brass, aluminium, stainless steel and sheet metal, of course”. Despite the team’s decidedly retro vision of the final motorcycle, it was fitted out with the best modern gadgets including electronic ignition, a Li-Ion Battery, a Motogadget speedo and electronic control unit that allowed them to really reduce the bar’s controls and clutter. “The front fork was developed entirely by us for this project. It’s our version of a trailing link system. We also added a large perimeter disc brake at the front.” The brake and clutch levers are reversed with their workings hidden in the ‘bars and the new rear suspension set-up is now powered by a set of shock absorbers from Harley Davidson Soft Tail. And while you’d assume that the challenge for this Yamaha would have been the epic amount of fabrication work involved, the Galaxy boys beg to differ. “It was the bobber’s details. Designing and creating every single part of every component and having it all work perfectly was almost impossible. But with 5 years to spare, we had the time to make it happed. It seems like a lot, but it was completely worth it”.