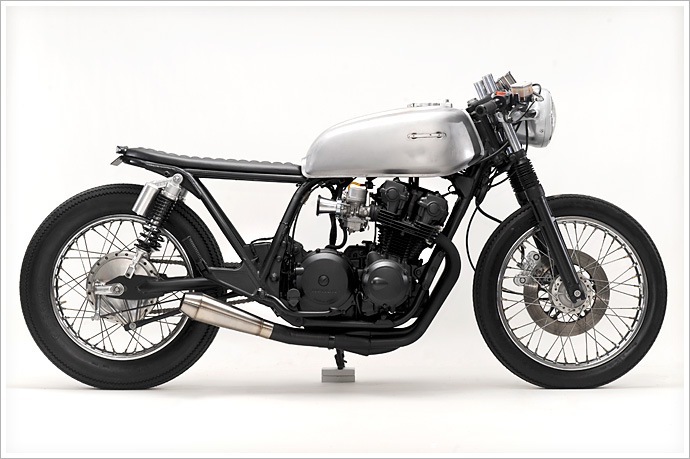 Every now and then on Pipeburn we’ll get a certain kind of bike. One that’s just, well, just right. Not too flashy yet not too vanilla. Not too cool yet not too square. Not too stock yet not too personalised. They are slippery little suckers that kind of defy description yet somehow speaks volumes about the state of play. Bikes that you innately feel will be the ones we’ll all look back in twenty year’s time and say, ‘now that is what the custom bike scene in the early part of the 21st century was all about. This is the latest bike from Steel Bent Customs. This is one hell of a CB750. This is that bike. Here’s Chief bender himself, SBC’s Michael Mundy. “It’s 1981 Honda CB750. Something we’re calling the ‘Janica’ build. This time around it was a fully commissioned build. The core of the client’s brief was that he wanted the nostalgic look of the spoke wheels & the raw steel tank to be the main elements that defined the bike’s look.” But that wasn’t all the client had in mind. Obviously a man of classic tastes, he tick the box on a couple of classic touches as well. “He also requested that we use the Firestone Champion tires & velocity stacks to shove all the air through the block and on into the 4:1 exhaust where a Cone Engineering silencer can spit it out.” Sounds like a pretty scenic journey to us. “We finished her off with mini gauges, powder coated the headlight bucket & ears a steel silver to match our own custom fabricated clip-on bars. Add a two rider signature seat, and a set if gas filled shocks and it was pretty much done.” In a nifty nod to the modern, Mike added a tasty little Twenty First Century magic by making all the bike’s lights LED units. Mike finishes on a rebellious note. “All the mods really make this one ride that’s ready to terrorize the streets of Chicago.” Looks like the perfect tool for that job, if you ask us.

[Photography by Erick Runyon at Choppershotz]