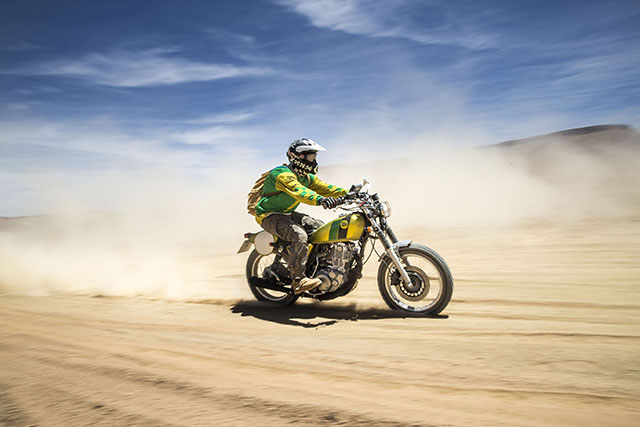 Looks like we aren’t the only ones who enjoy riding inappropriate bikes in the desert. For the past six years, the guys at Fuel Bespoke in Barcelona have been holding Scram Africa; a ride, over 2000km, that tests the skills of riders through the south of Morocco on roads, trails and dunes. A trip specifically for nostalgic riders inspired by the original 70’s scramblers – sorry, you’ll have to leave that KTM at home. This project started when the guys at Fuel were approached by their good friend Marco who had joined them on many Scram Africa rides in the past, but wanted something new for the latest adventure.

“The idea was basically to make an interesting bike with a low budget” says Karles from Fuel. “Improving the aesthetics and, at the same time, improving other aspects of the bike for off road riding.” They decided to base the build on the trusty 2016 Yamaha SR400. The SR400 is no newcomer to custom builds, but the usual suspects are café racers or street trackers often spotted in urban environments. Not usually built for a desert ride like this, across some very challenging terrain. In order for it to be Scram Africa race ready, it needed quite a few modifications. The first thing Fuel needed to sort out was the handling. The bike needed to carry Marco forays over some rough and rugged desert tracks for 10 days, so the rear shocks were swapped out for those by YSS. Plus, the spring forks were changed for more progressive ones – these mods greatly improved the handling of the bike straight away. Then they worked on the looks and the riding position of the bike. Some obvious changes, like new off-road footpegs and a more tracker style handlebar were added,  giving it a more upright and comfortable riding position than the original. The exhaust manifold was also modified in order to allow the silencer to get a better angle than the stock one. The rear of the bike is where it gets interesting. The guys at Fuel added a bit of Spanish influence to this Japanese classic by adding a modified fibreglass seat cowl from a vintage Ossa Stiletto. “The Ossa Stiletto was also known as the ‘Moto-Cross’ or ‘Scrambler’ and was introduced to the English market as ‘Avenger’,” says Karles. “That seat cowl plus a single scrambler style seat gives a new line and a totally different image to the original model.” To finish the bike off, Marco really wanted the colour of the bike to be “joyful & fun” – which also reflected the spirit of the Scram Africa event. So what may have seemed like an inappropriate bike to take on the Moroccan desert turned out to be the most fun and reliable bike to finish this gruelling ride – is there anything the SR can’t do? I don’t think so.