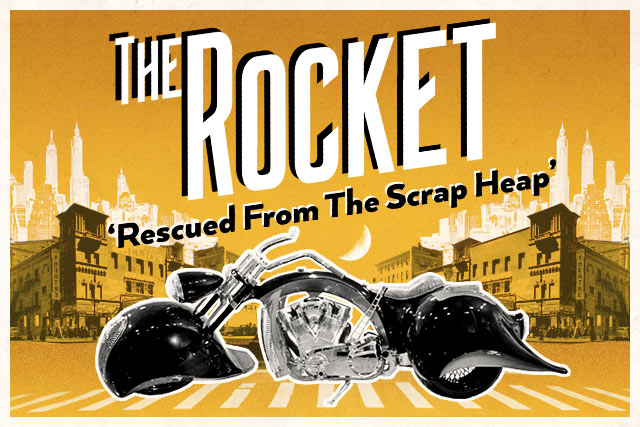 Prior to ever being installed in the Haas Moto Museum, every vintage cycle in the Collection is treated to a “day of beauty” in the shop at Strokers Dallas, where it is bathed and primped to remove the grime that has built up over the years. After its beauty treatment, each cycle is stored in a locked warehouse that may be accessed only through another warehouse.

As any parent would do, I often visited “the kids” in their halfway house at Strokers in the months leading up to the grand opening of the Museum.  As I made the regular trek through the first warehouse to the one where the Haas kids were stored, I noticed this huge hunk of metal on the warehouse floor. It was an imposing partial frame lying on the warehouse floor, rusting away with a massive 2508cc Ilmor Viper engine cradled in its belly. More than once, I crouched down to inspect the rusting carcass, wondering why such an unusual custom frame with a monstrously impressive power station would be left there to rot.

We bikers tend to infuse our inanimate machines with lifelike traits, occasionally even imaginary voices that silently communicate in a dialect that never grows extinct. If this frame could have spoken, it would have whispered, “I deserve far better than this. I was born for more noble things.”

There was a part of me that actually felt sorry for this carcass. Sorry enough to purchase the frame in this dilapidated state and recruit the most gifted mechanics to help translate my vision into something worthy of its distinguished roots. With the hunk of metal rescued from the warehouse floor and strapped to a lift in the shop, it soon came to life in my imagination. The Rocket (its nickname from the start) told me what it wanted to be—a massive, but refined Art Deco masterpiece adorned with parts that had no prior affiliation with each other or even with the moto world. True to this vision, I set about the task of fashioning a rolling sculpture that the Great Gatsby himself would have been proud to squire into one of his champagne-drenched soirées. 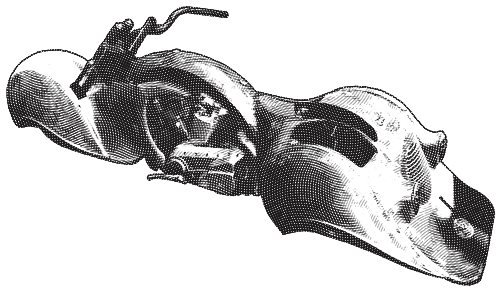 [superquote]“I deserve far better than this. I was born for more noble things.”[/superquote]

The rusted chassis was scrubbed clean and accessories from across the globe eventually accented all 125 inches of its refurbished body—soft Italian leather was recruited to encase its custom-made seat; patio door handles were imported from England for its two rear hatches; a headlight from a 1938 Chevrolet was transformed into its headlamp; and a bespoke piece of grillwork was fashioned from scratch for its front section, painstakingly welded, piece by piece, in the mode of a Bugatti grill.

Once all the bolts were tightened and it came time to dress The Rocket in its final coat of paint, one color just wouldn’t do, so we selected a process that would flip the color from emerald green to blue and back again as you walked around this juggernaut.

No longer a rusting carcass lying on the warehouse floor, The Rocket stood tall and proud—a regal creature deserving of a spin along the streets of the Dallas Design District with no less than the Great Gatsby at the helm.

I’ve been approached from time to time about parting with The Rocket at a handsome price that would befit such a resplendent creation.  But not even the Great Gatsby himself could tempt me to part ways with The Rocket … I would be forever haunted by the voice that whispered to me from the warehouse floor, imploring me to rescue a rusting carcass from the scrap heap and assure the far nobler destiny that it deserved.