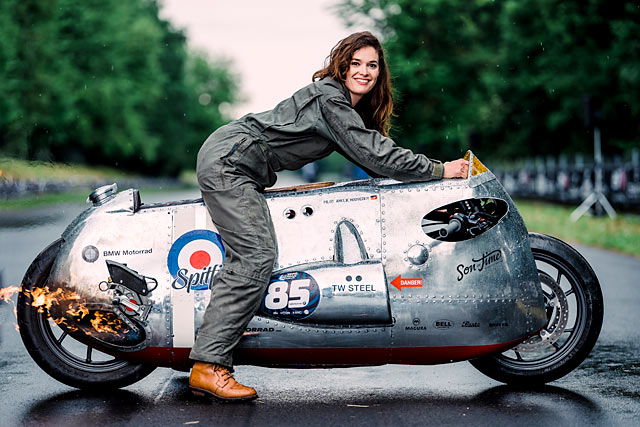 In case you’ve been in suspended animation for the past decade, let us fill you in on a little secret. If you like custom bikes, racing and getting a little silly, Europe’s Sultans of Sprint is so up your alley, your neighbours have just called the cops because the alley is now full of French lunatics doing burnouts. Nothing quite ticks all the boxes like this 1/8th mile race – which is probably why we’ve decided to cover the whole damn shebang for 2018. The first race is held during Monza’s The Reunion event. Our man on the ground? Mr Sultans himself, Sébastian Lorentz.

“Sultans of Sprint is a European custom sprint racer acceleration challenge,” says Seb, with a broad smile. “Sultans of Sprint is about pure passion, friendship, racing, dedication, smiles, huge parties, creativity and a positive attitude. All the entrant bikes are powered by 4-stroke, twin cylinder engines. Besides the races, the contenders have to push themselves in special challenges to earn bonus points, with the ‘party monster bonus’ probably being the most popular. Put simply, a good sense of humour is mandatory!” Sultans underwent a big update for the 2018 series. To broaden the event’s appeal and get more bikes racing, they’ve added a second class. “There’s the usual ‘Freak Class,’ Seb continues. “It could be also named ‘unlimited class’; the engines are only air-cooled and they can’t exceed 1700cc if naturally aspirated or 1100cc for supercharged, turbo, and nitrous bikes. The rear tire size is limited to a 160mm width for square tires and 190mm for round profiles.”

“The new class is the ‘Factory Class.’ It allows motorcycle manufacturers into the Sultans of Sprint circus. The engines are water or air-cooled; the base models used for 2018 are the BMW R nineT and R 1200 R, the Yamaha XSR700, the Triumph Thruxton R and the Indian Scout. To ensure a high level of competition, the customised factory bikes can’t exceed a fixed power to weight ratio.”

The first 2018 Sultans of Sprint round was hosted by The Reunion at the beautiful Autodromo di Monza, a historic race track located near the city of Monza, north of Milan, in Italy. Built in 1922, it is the world’s third purpose-built motor racing circuit after those of Brooklands and Indianapolis. And as you can probably see from the shots here, it’s 4.2 kilometre (2.6 mi) high-speed oval track – one of three tracks at the venue – still has its steep, banked corners. Sadly, it hasn’t been used in anger for decades. “My personal highlight was the new Factory Class,” continues Seb. “With great builds supported by BMW Motorrad, Yamaha, Triumph and Indian Motorcycle, they all had an impressive first race and the custom bikes were awesome. First place was won by the Indian FTR1200 Custom, just ahead of the BMW R 1200 R ‘Spitfire’ built by VTR Customs. With its short wheel base, flat track tires and high handlebars, finding the grip and avoiding wheelies on the Indian was not an easy exercise, but for this round Lorenzo was the fastest on the his mighty Indian Scout.”

[superquote]“We were all really happy to race and party after a very long winter spent in the workshops with our sprint racers.”[/superquote]

But not to be upstaged, the Freak Class still has its own bunch of special surprises. “FCR Original took first place with their Triumph ‘Crazy Bonnie‘ followed by Krafstoffschmiede’s ‘Hercules’ BMW and Macaco on Schlachtwerk’s ‘Skinny Beast’ Yamaha. The Freak Class is also welcoming many new awesome machines: KD Motorcycles’ ‘Il Veloce’, Schlachtwerk’s ‘Wasabi’, Bernard Mont‘s ‘Nowhere Faster’ and Jacques Charabot’s ‘Balinese Kiss’ just to name a few. On top of this, we were all really happy to gather to race and party after a very long winter spent in the workshops to improve or build our sprint racers.” Without giving away too many secrets from the Saturday night party, Seb filled us in on just how the teams earned the their “Party Monster Bonus” points. “It was limbo contest. Each rider had to perform a limbo dance and go under the height of his or her sprint bike. It was a great way to get the weekend party started and their were some good laughs had by all.” Seb tells us that the next race will be hosted at the classic Spa Francorchamps track in Belgium during the Bikers’ Classics event. “We are looking forward to showing up there and checking out all of the awesome classic racers ridden by enthusiasts on this beautiful track.” Besides the races, Seb also says that there’s a crazy new challenge waiting for the contenders.” Sounds like our sort of party.