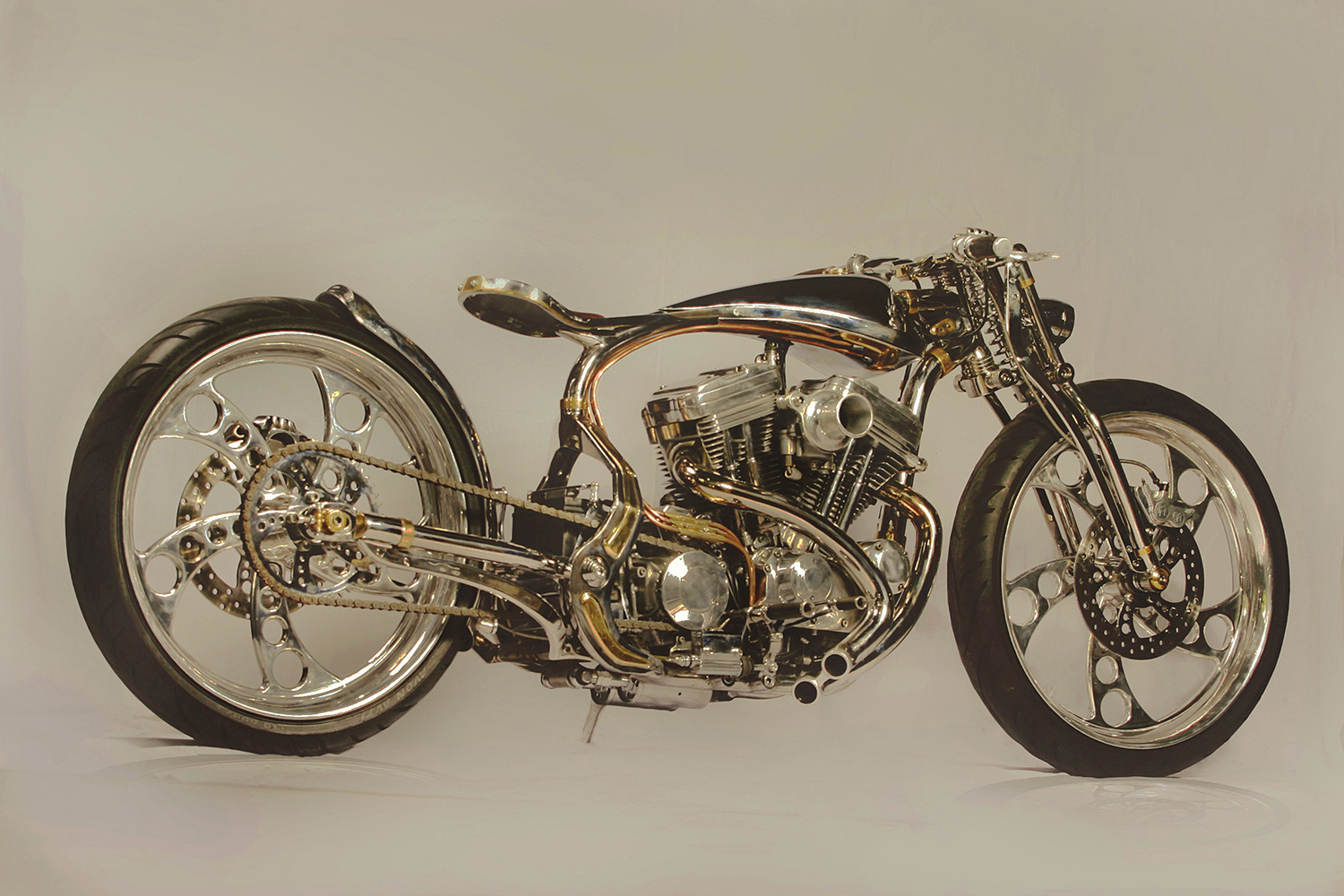 The bespoke motorcycle was essentially how the two-wheeled terrors we love so much first came to life more than a hundred years ago. One or two men often in tiny little engineering shops making machines of their own or for a customer with deep pockets. While some would use their own engine, most would rely on outfits like J.A.P to provide the power plant and build everything else on their own. That tradition has largely faded, the cost and expertise simply too much. But not for the team at Indonesia’s Kromworks, who are back with another bespoke beast, it might be Harley powered but the rest is their own incredible creation.

About once a year the Pipeburn inbox pings with the sound of another email from Andika Pratama the head of Kromworks with a single, teasing picture of their latest creation. Since we first laid our eyes on their bikes each has only gotten better and they simply have no care for convention. At first their motorcycles were powered by small capacity engines from the likes of Honda, but as they leaned toward big and bold the HD V-Twin powerplants mace perfect sense.

Customer and friend of the shop Tedja Wijaya, wanted a bespoke bike of his own and didn’t want to see anything else like it rolling down the streets. This was no problem for Andi, he’s impressed high profile clients enough in the past that they’ve come back for their second and third helping! With a rough design drawn up the genius on display is not just the visual creation Andi is able to produce, but the materials he manages to do it with.

Just about all of the bike is made from stainless steel, which is not only heavy and hard to work with, but for the grade that will give the strength required for a functioning motorcycle, highly expensive. But this is what makes a Kromworks bike so exclusive and it all begins with the frame building process on the custom jig. The single downtube, single backbone, and twin cradle design is a thing of beauty, with the broader centre posts giving a shapely figure like that of a ’50s pinup.

The swingarm like the rest of the bike is adorned with brass inlays to break up the polished stainless and provide the perfect contrast. The underslung design features a lower section that is bolted in place at each end, with the amount of overlapping surface area allowing Andi to control the vital amount of flex when using such a unique material for the application. To control it all he’s taken advantage of a pair of HD Softail rear shocks that like his own design run horizontal and allow them to appear concealed.

The front suspension is no less as impressive, this one-off stainless steel girder fork is the result of endless hours of fabrication and testing. Andi’s ability to make functional parts of the design look like they are simply there for the aesthetic is breathtaking and you have to marvel at the skill of a man so comfortable operating at the edge of what is possible. The flat bars follow a similar theme to early British bikes that used the same type of front end, but rather than a continuous round bar, the Kromworks items flatten out and are bolted down.

The minimal bodywork is simply beautiful and before you start looking for how it’s attached it appears as if the entire bike is one. The fuel tank is a work of art and you need to pause and imagine just how hard it is to create such smooth curves with stainless. It also incorporates the oil tank too with the copper lines running down to the engine. The curvaceous rear fender floats over the back tyre, affixed to the swingarm, and incorporating a recessed light. While the seat stitched up in vintage leather floats in the air, an extension of the main-frame.

The bike rolls on massive 23in billet rims that are wrapped up in rubber from Avon. While ensuring the braking does the job and looks the part saw Andi doing his only catalogue shopping with the team at Performance Machine. Like the rest of the bike, the engine from a Sportster 883 has been polished up as an homage to raw metal, but it hasn’t been left totally stock. The velocity stack was turned in house from aluminum, while the swooping twin pipes are the only conventional use of stainless steel on the bike and make a thunderous noise. The preview pics of the motorcycle known as Min’t have already had the internet buzzing and now the Kromworks creation is here for your total enjoyment.