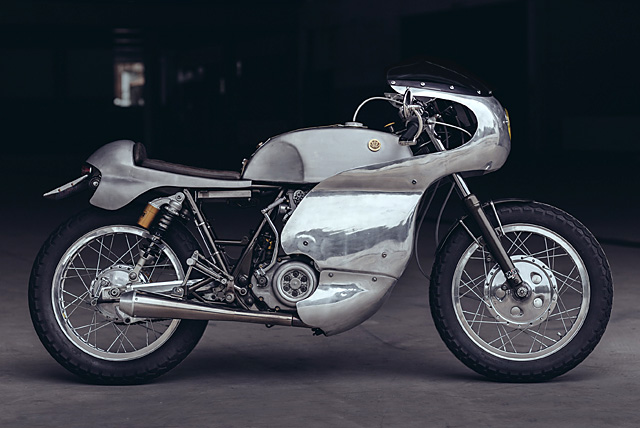 There was a time when only two things wore raw shields of smoothed out aluminium, UFO invaders cutting through the sky to attack earth as narrated by Orson Welles and the race bikes of the big manufacturers that were as equally alien to the visuals of a real road bike. It was a time when the imagination was the only limiting factor, rules and regulations not strangling the mind as they do today and allowed the likes of Isaac Asimov to amass a portfolio of more than 500 science fiction works. It was while reading Asimov’s famous Foundation Series that Markus Pintzinger came across the name of a micro food exporting Mycogenian known as ‘Sunmaster 14’ and decided it would make the perfect name for a future build. As the head honcho at Omega Racer in Thailand, Markus finally got a chance to use the name on a build befitting the era as he turned a ‘98 Yamaha SR400 into an aluminium shielded racer ready to descend from the skies and take over the Bangkok streets. The name is perhaps even more befitting given that Omega Racer is a parts supplier offering the very best components for the Yamaha SR, Kawasaki W650 and Triumph customs just like on this build, whose name sake did the same with micro foods on Asimov’s fictional planet of Trantor. Back on planet Earth Markus has been living in Thailand for the past ten years and when he picked up the SR five years ago and began adding custom parts he was constantly being asked where he got them. At the suggestion of a friend he opened an online parts store and so successful has the venture become it’s now his full-time job. At first the bike was a Tracker build but 18 months ago it was taken off the road for a full overhaul. “People are quick to label everything out of the ordinary as café racers these days, but my bike is definitely not one. My inspiration comes from the racing bikes of the 60’s and 70’s, where every part had the specific objective to make the bike go faster.” So just like a racer the bike was pulled down to the bare bones and built up with the best parts available and components built by Markus and the finest craftsman in Thailand. Well to be honest it didn’t get off to such a smooth start, with the bike in pieces the SR frame was sent off to be powder coated, a process that would occur three times. The first shop did a terrible job the first time around and equally as poor when they tried to correct it, so it was off to Cog’n’Roll, a powder coating shop in Bangkok who finally captured the look Markus had always envisioned. “I think this satin dark bronze colour looks great and matches the dark brown leather parts on the bike.” As Omega Racer offers aluminium tanks for the SR, that part of the build wasn’t going to be an issue but to truly take it to the racer level he desired, Markus had his supplier create the full body fairing that graces the Yamaha today. Totally unique to this build the polished aluminium retains the hand crafted look of UFOs and Dust Bin Racers from decades ago with soft lines and lightweight creating a perfect balance of form and function. Clearly a great deal of work went into shaping the body panels to neatly tuck up against the SR’s mechanical components that while faired still retains a slender profile. In true racing style the belly pan is removable with just a few hex head fittings to allow for easy access to the mechanicals and a hand crafted opening lets the yellow lensed headlight peak through. The aluminium tank is the perfect addition for the build, a standard item would have looked totally out-of-place and the raw brushed finish and industrial fittings further enhance the overall theme. The seat cowl finishes out the larger parts of the body work, not prepared to accept the standard cafe look, the unit Markus required has the ultra-minimalist hump and side plate design just like the machines that once took off down Bray Hill at the Isle of Man. But if the body work is brilliant it’s all the little touches that take it to the next level, as it might be race inspired it still needs the quality finish to serve as a rolling advertisement for Omega Racer. The stunning fittings on the tank and the aged leather tank strap are all works of Markus who wanted classic touches of quality to offset the incredible fabrication work. He also made the engraved plexiglass fender that shields the bike from anything flying off the rear tyre and the Roman coin like Omega Racer tank badges. The leather seat was done by the guys from The Sports who do some of the best work in Thailand and the brown diamond stitched leather is finished off with a recessed Yamaha badge. To match the yellow and bronze accents, the in frame oil cap is colour coded and along with a rear number plate and a classic tail light perched at the back of the seat, the visuals remain clean with no turn signals or anything at all unnecessary poking out the sides. What had attracted Markus to the SR all those years ago and is arguably the reason so many others around the world love the model, that engine. “I got my SR and I fell in love with its simple mechanics, the classic look and the beautiful thumping sound of the big single.” So to ensure Sunmaster 14 made the most of its mechanicals Markus tore down the engine, gave it a thorough clean and rebuilt the internals back to factory specs. To give the thumper some extra power and snappy throttle response he then fitted up a Keihin FCR39 carburettor that draws air through a meshed off velocity stack. Creating a nice rumble is the all new exhaust that gives a nice snap, crackle and pop thanks to a polished megaphone muffler. While dealing with the hot and humid conditions of Thailand that can be both power sapping and lethal to any engine a big oil cooler and large cooling fins have been added. But what makes a lightweight single really quick is not the engine, it’s all about mid corner speed and no expense has been spared in making sure this Yamaha has the very best. The front forks with the lower legs finished in frame matching powder coat may appear standard but inside they hold the very best WP progressive springs. But it’s out the back where things get serious, straight from the Omega Racer catalogue is a lightweight and polished aluminium swingarm that is controlled by a set of Ohlins adjustable shocks with progressive rate springs. The drum brakes on the front definitely give the period racer look and new spokes lace them front and back to quality Akfront rims. Even the tyres are the way they should be, classic yes, but no compromise as the Dunlop TT100’s were the first to lap the Isle of Man TT course at over 100mph average speed. To finish off the build in style Markus simply turned to a host of the parts he has in stock, from the lightweight clip-ons, to the raw and precise alloy rearsets. One of the unique pieces that gives the commuter bike SR a big dollar race bike look is the clear side covers that use a shatter proof plexiglass and a fully integrated seal to ensure the look doesn’t come at a nasty expense. Simple toggle switches and grips dress up the bars with purpose and a single Daytona clock provides the vitals. Perhaps the one compromise is the single mirror, but it would be insanity to ride in Thailand without one. “A special mention should go to Nose at Paknam 2 Wheels, the only guy I trust to work on my SR. He got me out of an electrical nightmare and I’m forever grateful for that.” To many on the hustling humid streets of Thailand, Sunmaster 14 must appear as alien as any of Asimov’s creations, but if the old Tracker version turned Omega Racer into a full-time business it literally is sky’s the limit with the all new racer version.